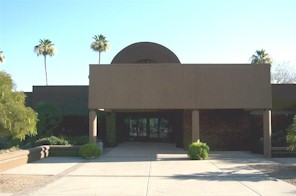 What an amazing couple of days it has been so far in Scottsdale!

My son flew from Atlanta to Phoenix by himself on Christmas day (the rest of us were still celebrating with our extended family down in New Orleans). He got himself to the airport in Atlanta, arrived in Phoenix, took a cab to our hotel in Scottsdale, then met up with one of his Southern Section buddies to hit. The next morning, he connected with two of his future Santa Clara University teammates, Kamran and Connor, to hit and check in for the tournament. Later that afternoon, he hit with Kamran again, then joined his family for dinner. My husband and I didn’t get to the hotel until close to 9pm. It was a long day!

About a week before the tournament, I got an email from a ParentingAces reader letting me know she lives in Scottsdale and offering to help us with anything we might need. I took her up on her offer, asking if my son could borrow a cooler to use on court during the tourney. She graciously volunteered to drop it at our hotel for him. Well, not only did she drop off the cooler, but she also brought us a huge cooler filled with Gatorade, orange juice, bananas, oranges, granola bars, pretzels, and all sorts of other snacks. On top of that, she left a case of bottled water for us. What an amazing gift! I called her to say thank you, and she explained: “I’m the team mom for my kids’ various sports, and whenever we travel to a tournament, my first stop is Costco to load up on drinks and snacks. I always thought, ‘Wouldn’t it be great if someone could have that stuff waiting for us when we arrived?’ so that’s what I did for you!” Cindy, you have no idea how awesome a surprise that was and how much we are enjoying all the treats! Thank you, thank you, thank you!

Yesterday was Day One of competition. My son had arranged to warm up for his 11:30 first-round match with Kamran at a local high school. I briefly met Kamran’s dad at breakfast before heading to the courts. The boys were decked out in their Santa Clara gear – Go Broncos! It was chilly but the sun was out, so we figured the weather would be pretty perfect by the time the boys started their matches, and we were right!

When we got to the tournament site, Connor was on court, and his parents and one of the Santa Clara assistant coaches, Aaron, were watching court-side. My husband and I introduced ourselves and spent some time visiting with them, getting to know each other a bit. Once my son went on for his match, we headed to his court to watch. Aaron and Connor’s parents came over, too, after a bit. Then Kamran went on the court right next to my son, so we got to watch him play, too. The 4th Santa Clara incoming freshman in the tournament, Robert, was scheduled to play as well. It was great for my son to get to meet so many of his future teammates and for my husband and me to meet their parents!

I was pleasantly surprised to see so many college coaches on site yesterday. They were there watching their 2015 recruits but also scouting players for future years. I’m always amazed at the camaraderie among these guys and love seeing them laugh together and share their war stories.

After the singles, my son and Connor were scheduled to play their first-round doubles match together. They seemed to communicate well with each other and pulled out a solid win to move onto Round Two. All I kept thinking was how cool it was to see these two young men on the court together as a preview to their next four years. The emotional mom side in me kept popping up as I watched them play. It truly warmed my heart!

Last night was the little parent get-together I had organized at a local sports bar. I wish I could report that we were over-run with attendees, but that wasn’t the case, sadly. I’m not sure why more people didn’t come, but I’ll keep trying in hopes of getting the parents away from the grind of competition and into an environment where we can get to know each other better.

So, now it’s the morning of Day Two, and I’m sitting in the hotel breakfast area, drinking my second cup of coffee, and looking forward to another beautiful day in Scottsdale. Good luck to those of you with kids competing here this week!