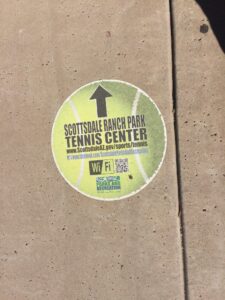 My husband, my son, and I are sitting on the plane heading toward home. It’s been a great few days in Scottsdale, and now it’s time to get back to life as we know it in Atlanta.

When I heard that my son had been selected to play in Winter Nationals, I was excited for him and hoped he would get the chance to compete against some of the players I had been reading about on ZooTennis and other junior tennis media outlets. I figured it would be a great experience for him to see what it feels like to play at that level, but, truth be told, I wasn’t sure he was of the caliber to hang with those boys. I couldn’t have been more wrong!

This tournament experience definitely felt different . . . for a lot of reasons. It’s rare for my husband to join us for tennis travel, so that was really nice. We got to spend some quality time together watching our son compete.

And, this was my son’s first tournament since committing to play at Santa Clara University next year. There’s something pretty special about seeing your child wearing his college gear on the tennis court. I found myself getting even more emotional than usual as I started thinking about what the next few years have in store for him.

On top of that, we all got to spend time with 3 other incoming Bronco families, which was amazing. The 4 boys

Dinner with the Broncos

quickly, and we parents did, too. As we said our goodbyes to each other, the parents all agreed that our sons are in for such a great experience and that we’re lucky to have each other as a support network in the coming years.

And, for me, it was fun to get to see so many of the college coaches and chat with them about the upcoming season. Every time I get the chance to be around these men and women, I am reminded why playing college tennis is such an admirable goal for our kids. These coaches understand what tennis has to offer a young player, and they are passionately committed to helping these kids grow from the experience.

Also, I got the chance to see some old tennis buddies like Ross Greenstein, meet some PA readers in person like Cindy Good and Mike Gealer and Richard Schick, and chat with one of my tennis idols Tracy Austin whose son was also competing in this tournament.

Another real treat was seeing one of my husband’s childhood friends and his family who were visiting their family in Phoenix. They came out to watch my son play, and the guys got to catch up on decades of missed time!

And, despite what others had told me, the Boys 18s was run incredibly efficiently. Tournament Director Sally Grabham did an amazing job at communicating via email with the players and parents prior to the start of the event. She kept the tournament website updated and made sure we all had the information we needed. During our time at Scottsdale Ranch Park, matches ran pretty close to on-time, the tournament desk volunteers accommodated player requests to delay subsequent matches when their earlier matches ran long, the on-site medical trainer was very knowledgeable and effective (he was kept very busy!), and the on-site stringers worked quickly to keep up with all the broken strings. The officials at my son’s site were quick to respond to any problems but kept their distance when not needed, a testament to Tournament Referee John Bramlett. There were plenty of practice courts available at no charge for the boys to warm-up though I did hear from another parent that one of the girls’ sites was charging a fee. We wound up staying at one of the suggested hotels, the Hampton Inn & Suites Scottsdale/Riverwalk, and it was quiet, comfortable, and convenient.

Before the tournament started, Universal Tennis Ratings did a pre-event analysis of the competitor list for each age group, ordering the players based on their UTR (click here to see the list). As expected, my son fell in the bottom half of the list though pretty close to the middle of the pack. His first-round singles match was against the player ranked #19 on the list, a boy who was not seeded but probably should’ve been. It was a very close match, but my son pulled out the win. In his next match, he played the boy ranked #14 on the list who was seeded. My son won the first set, lost a close second set, then, sadly, had to retire the match early in the 3rd set with an injury. But, he was competitive with this boy. For maybe the first time, I was realizing my son is definitely at the level of these other players and has earned his way into these tournaments through his hard work. Had I been underestimating my son’s ability on the tennis court? Maybe. But, if I had, this tournament definitely put an end to that mistake. In his final match of the tournament, my son played the #39 player. My son won the first set 6-3, stayed on serve until the end of the 2nd when his opponent broke then held for the set then took the 10-point match tiebreaker 10-8. It was a tough loss, but, once again, I was reminded of my son’s ability on the tennis court and that he belonged at that level.

I think I mentioned before that my son was playing doubles in Scottsdale with one of his future Bronco teammates. Well, seeing the two of them in their SCU shirts giving hand-signals and high-fives between points was just a glimpse into the future for me.

I can’t wait to be at the matches cheering for them as they compete for their school. All of these kids have worked so hard and made so many sacrifices to reach this goal of playing college tennis, and now their dreams are becoming a reality. Amazing!

At one point during the tournament, I received a Facebook Message from the parent of a 12-year-old player asking me what is the benefit of playing these national events. I had to think for a minute before responding. For the younger players, it truly is about gaining national ranking points and having the chance to compete against kids from around the country – both valuable but not absolutely necessary in the scheme of things. Honestly, I’m not sure I would’ve spent the time and money to travel across the country for this tournament when my son was younger because (1) he wasn’t at that level yet, and (2) he had plenty of opportunities to play competitive matches within our section. But, for someone who lives in a less-competitive area or for someone who has the financial resources, why not? There are worse places to be in December! That said, for the 16s and 18s, especially for those who are in college recruiting mode, Winter Nationals is a great way to get exposure to so many college coaches. Many of the ones I spoke with are still looking to fill roster spots for Fall 2015 while also looking ahead to future years. They were splitting their time between the 16s and 18s sites, hoping to find those players who would be the right fit for their various programs.

After my son lost his final match of the tournament, I texted my new friend, Cindy (the one who brought us the coolers and goodies),

to let her know we’d be leaving the next day. She replied, suggesting that I go back and read the interview Colette Lewis had done with me for TennisRecruiting.net back in 2012 (click here). Cindy wrote, “I know you are proud but re-reading that article now it is amazing what he has done.” So, I took her advice and read it. Cindy was right. I had forgotten where my son was tennis-wise when we first started this ParentingAces journey. He has definitely come a long way in a short time. And, if nothing else comes of this website, I hope it will at least give other parents and junior players a glimpse of what can happen when a child stays committed to a goal and his/her family stays committed to supporting that goal. I’m here to tell you it is definitely worth the sacrifice!