Another Side of Junior Tennis

Pursuing Your Passion with Zeal 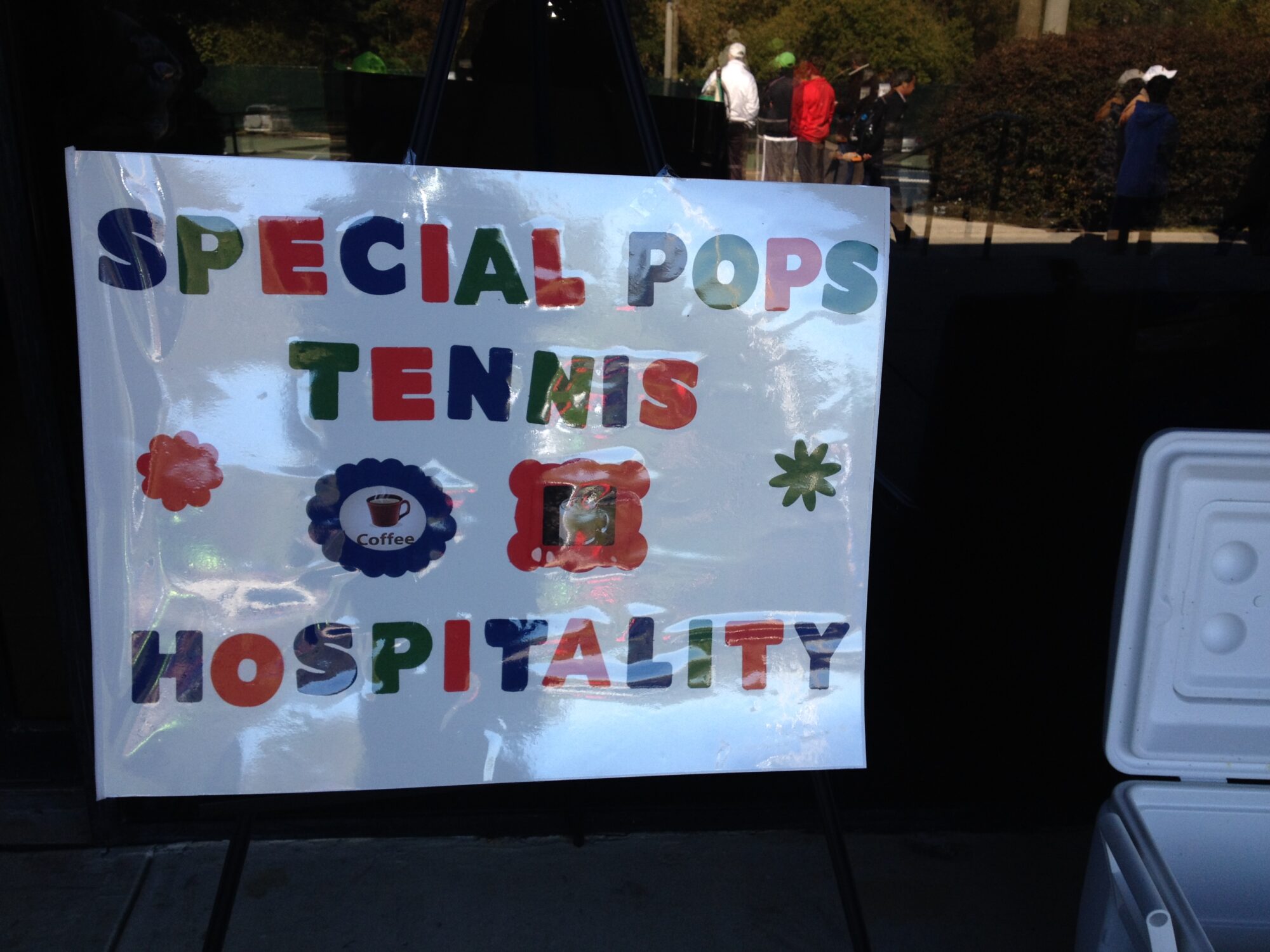 Getting ready to play!

This past weekend, I was exposed to a very different side of junior tennis competition, the Special Pops Fall Classic Tournament. It was like nothing I had ever seen – players and parents and coaches and supporters grinning ear to ear, cheering each other on, hugging at the side changes, gently correcting each other’s mistakes, and generally just finding the joy in being on the tennis court. Incredible!

Let me give you a little background . . . Special Pops Tennis was started by a group of tennis enthusiasts in the Atlanta area in the early 1990s. Its mission is two-fold: (1) To consistently provide a meaningful year-round tennis experience to children and adults with intellectual disabilities; and (2) To provide every person with intellectual disabilities the opportunity to participate in a meaningful tennis experience. It became a stand-alone 501(c)3 non-profit organization in 2005 and has sustained itself through incredible volunteers, fundraising, and sponsors.

At the US Tennis Congress a few weeks ago, I sat with a young woman – Jessica – from Alabama (by way of Argentina and Germany) who is a former top junior player, college player, and professional. She has been coaching juniors and adults for the past couple of years and recently started her own program for both developmentally and physically disabled kids. We chatted at dinner and she enlightened me on all the tennis programs available to that population. Last week, she was in Atlanta for a Special Pops fundraiser and invited me to come out to the Fall Classic so I could see for myself what this amazing organization is doing. I’m so glad I went!

I had the opportunity to hang out with Jessica and her 17-year-old player, Shelby, and to watch Shelby and her peers in action. This was actually Shelby’s first tournament – she had only been on a tennis court 5 times prior to the event – but she went on the court and competed like a champion! Although she only won 2 points in her first match (matches are 2 out of 3 short sets to 4 with a tiebreaker in lieu of a 3rd set; along with the players, each court has 2 ballkids, an official, and a helper), she came off court with a huge smile on her face, so proud of her accomplishment. Coach Jessica was beaming, too, as was I. I found out after the event that Shelby, on top of all her excitement and new friends, won the Sportsmanship Award, given to one boy and one girl. As Coach Jessica put it, it was the “cherry for the ice cream”!

Shelby with her Sportsmanship Award

The joy out there was absolutely palpable. And how ironic that a USTA Regional Segment tournament was going on at the same facility at the same time. When you walked by the courts where the USTA kids were competing, you could feel the stress and pressure coming from them. I chatted with one USTA mom, and she was lamenting the lack of fun on her son’s court as compared to these other courts. She agreed with me that we could all learn something from watching the Special Pops kids in action. Excellent sportsmanship, love of the game, enjoyment of being with friends, parental support – all of these were givens in the Fall Classic; sadly, not so much in the Regional Segment.

Don’t get me wrong – the Special Pops competitors want to win just as much as anyone else. The difference I saw, though, was, win or lose, it was all about having the opportunity to be on the court, playing tennis, doing something they love. And, once the match was over, the result was pretty much forgotten, and the focus shifted to hanging out with friends and watching others play.

Lucy Caldwell, mom to 23-year-old Gray, one of this year’s competitors, told me how much it means to Gray and their entire family that he has a competitive outlet just like his sisters (who competed in gymnastics and soccer growing up). And Joy Prettyman, mom to Jack (age 19) and a long-time volunteer and supporter of Special Pops, reinforced the importance of giving kids with developmental disabilities the chance to learn and compete in the same sports that they see their siblings and peers playing. Jack’s older brother was a high-level junior player, and Joy competes in local leagues herself, so tennis is definitely a family affair for them.

It turns out that one of my neighbors (and ALTA teammates) and her family are very involved with Special Pops. Sally Berry’s daughter, Hadley (age 25), has been playing in Special Pops events since its inception. She plays singles, and she also plays “adaptive” doubles with her aunt, Judy Frankel. I saw all of them at this tournament and had the chance to talk with Hadley about her favorite part of competing. For her, it’s about seeing friends and playing the sport that her mom and aunt love so much, but it’s also about winning medals! Between her own matches, Hadley made her way to all of the courts to cheer on her buddies as they played. Since she’s been around for such a long time, she knows pretty much all the players out there and made the effort to meet the newbies among them. I guess you could call her one of the Special Pops Ambassadors!

I chatted with Serena Trout whose son, Tyler (age 14), was competing in the Fall Classic.

Her younger son, Bryce (age 11), plays USTA tournaments and was volunteering at this event. Rather than try to summarize what Serena shared with me, take a few minutes to listen to why she and her family value Special Pops:

And, let me tell you a bit about the cost of participating in the Special Pops Fall Classic. The entry fee for the 2-day tournament is $45.00. Included is (1) a hotel room for 2 nights; (2) a dinner dance for players and their parents and coaches; (3) on-site lunch both days for players, parents, and coaches; (4) snacks and drinks; (5) t-shirt; (6) gold, silver, or bronze medals for each participant. How do they do this, I wondered? I mean, our USTA junior events cost anywhere from $40-$150 and don’t include anything but a t-shirt and a plastic trophy. It’s all about the volunteers and the sponsors when it comes to Special Pops. Event directors spend the time cultivating relationships with area businesses who are all too happy to donate hotel rooms, food, and other items in exchange for the goodwill they gain (and their name on the back of the t-shirt!). These sponsor relationships are very highly valued, as you can imagine, and require constant attention, but it’s worth it when you see how much the families appreciate that effort and care.

I think we have a lot to learn from Special Pops. And, I hope our USTA tournament directors will consider taking a closer look at how Special Pops manages to create these incredible events. In any case, please look for similar programs in your area and have your junior player think about giving back in a very special way to our very special sport.