What’s Wrong with US Tennis? 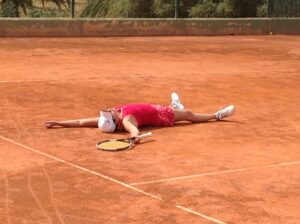 For those of you who read my trip report from my time in France and Spain, you know I had the fabulous opportunity to take a lesson on the red clay in Mallorca at Global Tennis Team Academy, run by well-known coach Jofre Porta who has worked with Carlos Moya and Rafa Nadal among others.  While I didn’t get to work with Jofre himself, I did work with one of his coaches, Vinicius Oliveira, who spent some time talking with me about how juniors train at their academy.  I also had the chance to talk with Jofre’s wife, Afiza, who manages the business-side of the academy, about the day-to-day training regimen the players endure.  It was all very eye-opening, to say the least.

Before I hit a single ball in my lesson, Vini asked me to hold up my hands in a specific way to create a small triangle.  He then had me look through the triangle so he could determine which is my dominant eye.  When I asked him why that is important, he explained that it impacts the way they teach players to move and to position themselves around the ball.  He went on to share with me that I am left-handed and right-eyed, just like Rafa!  Federer, on the other hand, is right-handed and left-eyed, but many players are same-side dominant with both their hands and eyes.

Then, Vini had me come up to the net – I figured we would be playing a little mini-tennis to get warmed up, just like I do for my matches at home.  Nope!  We did a drill to “wake up the brain” wherein I had to bobble the ball on my racquet then softly volley it to Vini across the net, alternating between my forehand and backhand side.  Apparently, my brain was still very much asleep as it took me about 10 tries before I could successfully complete the drill!  We continued doing similar drills at the net to work on connecting the brain to the movement before pushing back to the baseline to work on groundstrokes.

But, this wasn’t your typical “let’s hit 10 forehands crosscourt then 10 down the line then switch to backhands” drill.  Vini stood on the same side of the net as me and hand-fed balls to various spots on the court.  He directed me where to hit each ball and how to recover on the slippery clay, forcing me to concentrate very hard on my legs.  Needless to say, my strokes looked a bit funky since it’s getting harder and harder for me to focus on more than one thing at a time!  But, the footwork and recovery were the important things here, NOT where my ball was landing.  Again, this wasn’t a typical drill.  I wasn’t just hitting balls and learning how to move on the clay.  Vini fed the first ball wide to my forehand side, and I had to hit it crosscourt and recover to the center without taking any extra steps.  He fed the next ball wide to my backhand side, and I had to catch it with my right (non-dominant) hand and toss it gently to him before recovering, again taking no extra steps.  While this may sound simple, I can tell you that catching the ball rather than hitting it with your racquet is NOT an intuitive reaction on a tennis court!  The first couple of times we did the drill, I was hitting that ball with my backhand rather than catching then tossing it to Vini.  But, Vini was very patient and kept encouraging me through the process.  The next ball came short to my forehand, and I was to hit it crosscourt again.  Then one short and wide to my backhand for a crosscourt shot followed by a deep ball to my backhand.  The final ball was short to my forehand which I was to finish with a down the line winner.  After 8 balls, I was huffing and puffing like I was 80 years old!  Please remember that I’m a fitness instructor who also does yoga twice a week and plays tennis once or twice a week, so it’s not like I’m totally out of shape (or so I thought)!  This drill was ROUGH!

Here’s a video from Global showing the drill described above:

I asked Vini if I could take a water break before continuing the lesson, and we walked over to the bench on the side of the court.  I sat down to drink and recover a bit, and Vini told me that only those players who are inside the top 100 in the world get to sit during water breaks.  Talk about tough love!  He cut me some slack, though, and let me catch my breath while we talked about some of the juniors and coaches who train at Global.  There is no coddling at this place – it’s hard work on the court, high expectations off the court, and plenty of time for enjoying Mallorca’s beauty once tennis and academic training are completed each day.  The players who come here are here to work, to get better, to find a way to “make it” on the tour.  Or, they’re here to learn how to coach at the highest level because Jofre also offers that type of training for those who realize they can’t (or don’t want to) make a living as a player but want to help others reach their potential.

My lesson continued with more groundstroke work then work on my serve.  Vini helped me learn to use my legs to initiate the kinetic chain of energy and get more “pop” on my serve – it was amazing how quickly I was able to generate additional pace while still managing to get my serve over the net and into the box!

At the end of my lesson, like every player who trains here, I had to drag the court to get it ready for the next person.  This is part of the discipline and respect that they work to instill in their players at Global.  And, yes, even Rafa has to drag his court after a workout!  After I completed my task, my husband and I went inside to speak with Afiza about the inner-workings of the academy.  She shared the price list with us, and we talked about the boarding and schooling aspects of training there.  Afiza is The Momma to all the players, even though she has 4 children of her own, planning and chaperoning them for off-site excursions and acting as the liaison with their families back home.  She is from Malaysia (a former super-model there) but speaks perfect English and was very gracious and forthcoming with information.

A typical summer day of training at Global looks like this:

Like I said, INTENSE!  Jofre and his staff expect the highest level of effort from their players.  I suspect they rarely hear things like “I’m tired!” or “I can’t!” at this place – that type of attitude just wouldn’t be tolerated.  And, that was the startling difference to me between what’s happening at Global and what’s happening here at home.  As much as I love the various coaches my son has worked with over the years, I feel there’s an over-arching attitude of permissiveness on the part of coaches (as well as parents, and I’m as guilty as anyone) and a general lack of accountability on the part of our kids.  Yes, I’m generalizing here, and I know I’ve written about why that’s a bad thing to do, but this was something that really stood out for me in my short time at Global.  There is an expectation here – by Jofre, by his staff, by his wife and business manager, and by the players – that if you are here, you are committed to doing everything within your power (and attempting that which may be beyond your power) to get better as a player or as a coach.  There is no such thing as slacking off.  There is no such thing as half-assed effort (pardon my French).  There is no such thing as quitting when it gets too challenging.

It’s not that Global’s coaches are necessarily any better at teaching tennis than our coaches here in the States or at any other academy around the globe – there are great coaches to be found all over the place.  The difference, at least to me, is in the attitude, in the expectation, in the accountability.  I’m sure there are other academies that enforce that same level of commitment that I saw at Global, but I haven’t seen them personally.  I know plenty of junior players, including my own son, who could really learn and benefit from this difference.  And maybe, just maybe, it’s one of the things our American kids need in order to rejuvenate the tennis culture in our country and produce more top-level players.  What do you think?