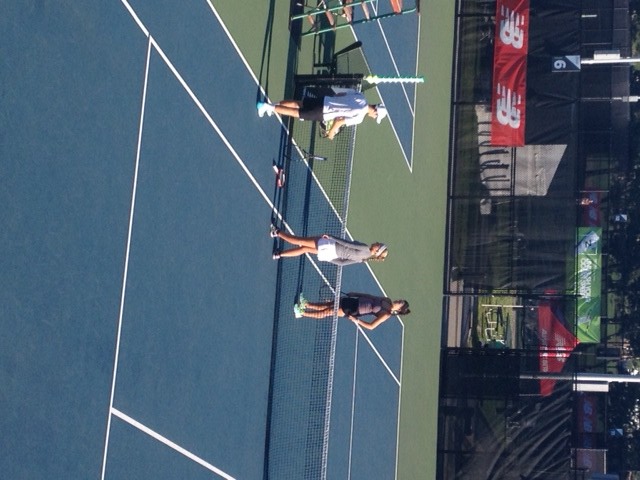 Summer is Officially Over?

Today’s guest post is by Fellow Tennis Parent Amy Mayfield. Thank you to Amy for sharing her experience in Boston!

Our trip to Boston and the New Balance Tourney was slightly different than most.  My daughter was at Harvard to play the Donovan Showcase tourney when we received an email that she had moved up significantly on the alternate list for NB.  We decided that we would stay in Boston Sunday night so that she would be an on-site alternate.  A player did have to default out of the back draw and so Bridget was able to take her spot.

The Donovan Showcase had a lot of coaches attend and many stay over until about Tuesday of the New Balance event. The great thing about having these two events at the same site back to back was that coaches could plan to attend both. I’m sure that was a huge plus for them. Also if you were looking at any schools in the greater Boston area you had time to visit — the structure of the NB tourney made that doable. Because Donovan attracts all levels of coaches and then having NB following it is a huge plus — this will only get better as this tourney is going to keep attracting highly ranked players who play high school tennis.

The New Balance tournament staff were awesome and quickly outfitted my daughter with the player swag! This included a NB roller bag, backpack, hats, socks,shirts, tanks, and a whole tennis outfit — not to mention a pair of court shoes. They also told her that she could have 2 items customized  and any other items were $10.

The entire staff treated the players and parents so wonderfully!!  It was truly an enjoyable experience!.  Every night there was an activity for the kids — a dinner, Blue Man Group and tour of Fenway Park — meanwhile the parents could explore the different areas of Boston and have some very tasty dinners and adult beverages.

Additional swag was also part of the outings —  one day at the courts a NB gal came up to Bridget and her friend, Sarah, and told them to head to the player tent (yes air conditioned player tent!!  No parents allowed) and pick up their additional shoes — they turned out to be a pair of “lifestyle” tennis shoes!!  What??  Thank goodness they gave us the large duffel to get everything home.

I could go on and on — the player lunches everyday and pizza one afternoon — also water, ice and Gatorade at the courts — wonderful coaches buses that took us all from the beautiful Hyatt Regency Cambridge to the Harvard courts everyday.  NB also underwrote part of the nightly rate at the hotel!

The thing that impressed me the most was how well everything was thought out and planned so well! -After all the tournaments that we have all traveled to and paid for this was truly a treat!

Thank you New Balance for everything!  This tennis parent and player can’t thank you enough for treating us all so well and making this an extra special week.  We have wonderful memories to add to our crazy ride of junior tennis!