Summer is Officially Over?

Today is the first day of school in our county. Crazy, right? But, since that’s the reality of living in Marietta, Georgia, I thought this was a good time to write about my son’s month in California, his orientation at Santa Clara University, and his plans between now and September 19th when he moves onto campus (Santa Clara is on the quarter system – hence, the late start date). 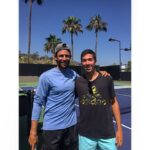 As I shared a few months ago here, my son spent the month of July training and competing in Southern California. After being at the beach for a week with our extended family, he flew to LA by himself to stay with his grandmother in Santa Monica while training with both Lester Cook and Ross Greenstein and playing a couple of the ITA Summer Circuit tournaments. At the end of his first week, he was joined by Max, a tennis buddy from Texas, for the remainder of the trip. Being on your own in Southern California with the use of a beautiful Mustang convertible (thanks to big sister Emma!) and a friend to train and hang out with – what could possibly be a better way to spend your last summer before college?

The first week, my son worked with Lester at both a private court (tennis small world story: the court was at the house of one of my husband’s high school classmates!) and at the Malibu Racquet Club, hitting with various college players from Cal Poly and UCLA 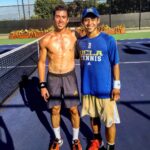 during the day and hanging out with his cousins at night. At the end of that week, Max arrived, just in time to play their first ITA tournament. They were both signed up for singles and decided to sign up to play doubles together, too. As luck would have it, the two of them had to play each other in the Round of 16 then go right back out and play a doubles match. They wound up getting a hotel room close to the tournament for Saturday night since my son had to play at 9am the next day – the campus was about an hour drive from Santa Monica with no traffic (those of you familiar with the LA area know that “no traffic” never happens!).

The boys took Monday off to rest and recover then drove down to San Diego early Tuesday morning to train with Ross alongside a couple other college-bound players. 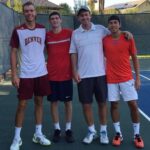 Ross worked them hard both on the court and off, taking them to a nearby trail for a mountain run. While my son didn’t exactly love the running (!), he did love the on-court work and felt it was really helpful to get Ross’s take on where his strengths are and where his game still needs work. At the end of each day, the boys explored San Diego a bit, finding good places to eat and hang out. That weekend was another ITA tournament where the boys once again had to play each other early in the draw. But, the night before that match just so happened to be my son’s birthday, so they drove back to LA at the end of the day so my son could introduce Max to one of his favorite restaurants, Sugarfish, to celebrate. 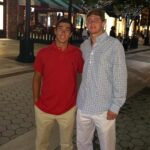 The third week was spent back in LA training with Lester. On Monday, my son hit with Les at the Malibu Racquet Club then spent Tuesday back out there as well where he ran into John McEnroe! The boys alternated between hitting in Malibu and at the house in the Palisades for the next few days before Max flew home on Saturday. The next day, my son flew up to Santa Clara where he and I met for orientation.

Please remember that I had already been through 2 different orientations with my daughters, one at USC and one at UGA, and I certainly expected the one at Santa Clara to be similar. In a lot of ways, it was. Once

my son and I checked in on campus, we went our separate ways for the next two days. He was in sessions like “Learning About the Curriculum” and “Technology for Academic Success” while I was in the Bursar’s presentation learning how to pay my bill and meeting with the dean of the Business School so I could learn what classes my son would be taking to fulfill his Major requirements.

But, one thing that was different about this orientation was learning how the university works with the student-athletes to ensure both their academic and personal success at the school. Given that neither of my daughters went the sports route, this was all new for me. Santa Clara offered a separate session on the 2nd day of orientation for the parents of student-athletes (the kids

themselves had a similar session on Day 1) to hear from and interact with the Academic Advisor for Athletes, and it was very eye-opening. I learned that that there are extremely specific NCAA rules regarding the number of academic hours a student-athlete must take each term as well as GPA requirements and requirements for advancing toward their major degree. At Santa Clara, each sports team meets with the athletic academic advisor before it’s time to register for classes for the next term. If a student-athlete needs to make a change in his or her schedule, he/she must meet with the advisor FIRST to make sure there’s no breach of NCAA requirements. The advisor works as a liaison between the coach, student, and professors to keep everything on track. I have to say that gave me a huge sense of comfort as I prepare to send my son across the country in a few weeks!

So, what’s my son going to do for the next few weeks? His high school friends are back in school as of today; his college friends are heading to their respective campuses over the next week or two. That leaves a lot of time to himself to get ready for life on the West Coast. Of course, he’s going to be playing tennis to make sure he’s in optimal shape to start his college tennis “career.” He may also try to pick up some tennis teaching jobs to earn a little extra spending money. He will have some shopping to do, too – clothes, dorm-room items, a laptop computer, etc. Other than that, I suspect there will be some significant down-time which will be good for him. He’ll hang out with the family a bit, with his girlfriend more than a bit, and gear up for what’s bound to be an exciting year as a college freshman and college tennis player. Lots to look forward to!