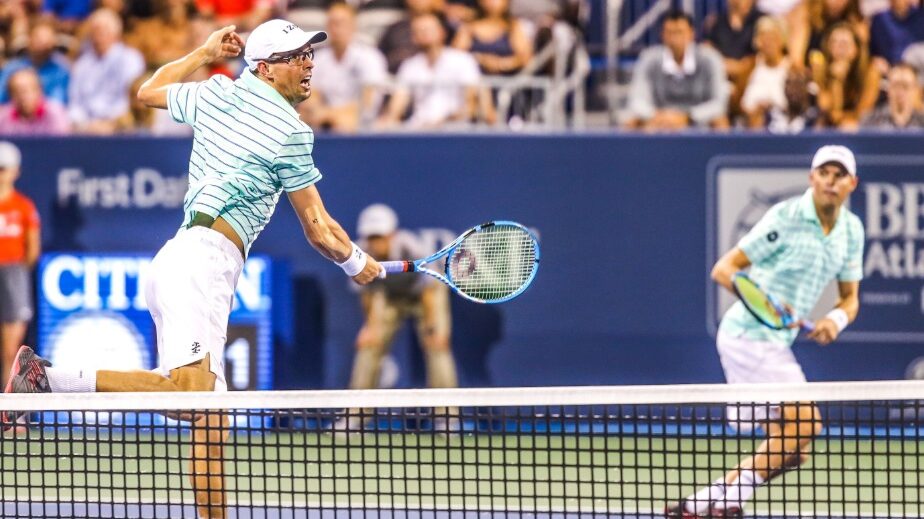 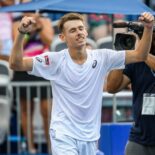 I took yesterday off from the BB&T Atlanta Open in order to celebrate my 34th (!) wedding anniversary with my husband, but I will be there for today’s Finals! In the meantime, here is the official release from the tournament’s media office:

Youth is the theme in the semifinals at the 2019 BB&T Atlanta Open presented by First Data. Three players age 21 or younger.

Players were looking to earn their spot in Sunday’s finals.

The first singles semifinal match opposed the ‘’big man of the future’’ Reilly Opelka and the Australian, Alex de Minaur. Both of these young guns (21 years-old and 20 years-old respectively) are looking to add a title to their prize list here at the 2019 BB&T Atlanta Open presented by First Data. These two played each other earlier in the year in Sydney, and the hometown favorite de Minaur got the best of the 6’11’’ American in straight sets 6-4 7-6. The one number to remember in the first set is the number three. Three is the amount of points lost by the young Aussie on his serve in the first set, winning 29 out of 32 points played on serve. The Stadium Court fans witnessed yet another tiebreaker from Opelka in the first set, as both players held serve. One double fault from the American at 4-4 in the tie breaker however, proved to be the edge de Minaur needed to take the first set home 7-6(4). In the second set the two ATP future stars produced much of the same tennis. With both players refusing to give away their serve, stadium court witnessed another tie breaker. This time it was the American who triumphed 7-5 to even the playing field at one set all. The third set took a very different turn when de Minaur broke Opelka after saving two game points to get the 3-2 lead in the final set. From then on the Aussie took full control of the match, breaking a tiring Opelka once more at 5-3 up punching his ticket to the 2019 BB&T Atlanta Open Finals.

De Minaur advances to his second ATP Tour final of the season, first since winning his maiden title in Sydney in January. The 20-year-old Aussie, who is 1-2 in finals, has not faced a breakpoint in 32 service games this week.

Taylor Fritz defeated sometimes doubles partner Cameron Norrie in a three-set battle Saturday night, securing his place in the finals. The first set flew by with Fritz winning 6-1 as Norrie struggled to keep his usually reliable forehands inside the court. After a mental reset and an adjusted strategy, Norrie eased into the rallies and broke Fritz twice to finish win the set at 6-3. A third set seemed to excite the sold out crowd that was ready for a battle to the end. Close games were the rule here as each player held serve until Norrie was finally broken at 2-3. From that point on, Fritz seemed relaxed in his service games and maintained a lead to secure the final at 6-3. The American advances to his third career ATP Tour final and his second in the past three tournaments. He won the Eastbourne title last month. Fritz and De Minaur are two of the 13 first-time ATP Tour winners this season.

“It feels great. It feels so good and reassuring that I made my first (final) in three years in Eastbourne and the next 250 I play, I’m back in another final.”

The semifinal match between doubles pair Jack Sock and Jackson Withrow and opponents Dominic Inglot and Austin Krajicek was a two-set match lasting just one hour and seventeen minutes long, with Inglot/Krajicek emerging victorious. There were 12 holds and the score reached 6-6. The tiebreaker started out with players holding. Inglot/Krajicek were able to capitalize on some errors and take the opener, 7-4. At 1-1, Sock/Withrow were broken and that is all the No. 2 seeded duo would need as they closed out the second set, 6-4.

Capping off the evening, the Bryan Brothers made it look relatively easy in defeating Albot and Sitak. One break in the opening set and a quick break in the second sealed the deal.

The BB&T Atlanta Open has welcomed more than 360,000 fans to Atlantic Station over the years, establishing itself as one of the top ATP tennis events in the US. Tickets for the 2019 BB&T Atlanta Open can be purchased at http://www.bbtatlantaopen.com/