From time to time, a junior coach will contact me about writing for ParentingAces. A few days ago, Darrick Yun (dyun@thepgcc.org), Head Tennis Pro at the Peninsula Golf & Country Club in San Mateo, California, 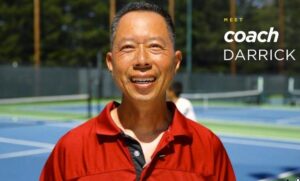 sent me the article below. It’s a random assortment of his thoughts and experiences during this summer’s tennis camp sessions. Enjoy!

Eyes on the prize, reboot the mission
I’ve lost the sight, but not the vision

Greetings from Northern California. It’s summer, the time when so many tennis coaches and USTA junior players work together for a big push forward in the junior’s game. But there’s another side of coaching. Because at our country club, even though we do have juniors both ranked in Northern California and preparing for college tennis, on any given summer day, we may not coach a USTA playing junior all day! Our mission, my mission, is a little different. Read on!

Part 1. More Than Fun and Games

Child Obesity, Popular Psychology, and Junior Tennis. Tennis coaches are well aware of the implications of child obesity combined with the overload of indoor stagnant activity. We, like various other sports coaches, get all the statistics. In TennisPro magazine (November/December 2015), a coaches’ magazine where most of the contributors are working tennis and fitness experts, Jack Thompson and Mark Allen of Performance Tennis Academy (North Carolina) state that child obesity affects 33% of America’s 10-18 year olds. But they go further with what the implications are for junior tennis development in general and professional tennis development specifically, especially how we currently compare to other elite world-class players; i.e., they chart that we’re more obese than other countries that produce elite players and that is partially to blame for how difficult it is for us competing with the world’s best players. They correlate this information with a timetable showing our pro level decline. They are stating that our obesity is affecting the size of our talent pool! Then, referring to informal conversations with college coaches, Thompson and Allen feel that “pop psychology” (what they feel is mass media, celebrity psychologists influencing family and teaching dynamics mainly through theory only) is an additional aspect of the overall health and sports developmental problem, that basically our youngsters are needing to be coddled to the point where these coaches felt their “coaching hands” were being tied behind their back.

Part 2. Trying to Make a Difference

So my first mission here, especially during summer, when we get new kids trying tennis out, is to try my darndest to get your kid addicted to tennis, just for the fitness of it! The above health issues are serious stuff! But all current tennis coaches worth anything have to think about these issues. After all, though it’s a small amount of time during the day, during the week, whatever the case, your kids are in a coach’s hands. Many times I’ll work with parents and find out what the family’s, and the child’s tennis goals are and what my tennis visions for the child might be. Because what’s fun for some kids is not fun for others. Like simply getting exercise, learning the game, being able to play with their families, or…the other fun. This one: some want the push because they want to learn how to compete and find it fun to be able to do things to the ball that they weren’t able to do before.

So I’m on a mission. But what about the tennis experience? What’s reality here? From our kids’ eyes. How do they know I’m thinking of them? They’re just going to find me bossy. Well one day, way before summer, I got the lowdown. In the first afterschool session this fall, the kids were still “California Dreamin'” as they were picking up balls after a set of drills, still reminiscing about the summer camps that had just ended, talking about everything and then everyone, and then… every coach, even past summer coaches that have long gone. There were clusters of kids (we were full, with about 57 kids throughout the week) everywhere picking up balls. And about three or four of them kneeling down picking up balls together, putting them on their racquets, just riffing out loud on the coaches, who’s mean, who’s nice, the whole rundown. Yep, they didn’t know, but I heard my name. The debate was furious because it’s not easy to earn your own category…and I quote, one of the kids ended the topic of me like this: “Coach Darrick is Coach Darrick.”

So we’re in that season that fills me with fond memories of teaching kids, even if some of those memories didn’t even take place during summer. It’s just that everywhere I’ve taught, I’ve been lucky enough to be in a thriving summer program where there are a ton of kids flying around during summer. So when I think of summer, I think of teaching kids. I also learned this: When teaching kids, things will happen that you cannot even begin to make up. And it’s not always super serious. For example…

Part 5. Maybe, Somewhere, Way Back in his Mind, but Doubtful, was Tennis

One of my first tennis teaching jobs, about 20 years ago, was on the Stanford Campus. There’s a small swim and tennis club there for university staff, alumni, and the nearby community. Now picture this, an impressionable coach, me, starting out and hearing this, because I did, and I seriously started to wonder what kind of career I got myself into. One sunny quiet afternoon when school had just let out, Tennis Director Andrea, along with coaches Ann, Jeff and myself were preparing for our Pee Wee class, 6 year olds. We were already on the court when…

I’ll  keep you from further suspense. The poor little guy came in on the same day every week and automatically went to our vending machine, ate a candy bar, and then came on the court. And as you by now surmised, always ate a Butterfinger and Butterfinger was always selection F1. The thing he didn’t know was, Andrea filled that vending machine herself. So she was automatically putting Butterfingers in the F1 slot. But it wasn’t conscious. Everyone knew you had to look at the selection you wanted and then push the corresponding button. But the little guy went on auto pilot and since Andrea had been putting it with that button, he’d run in and just push F1 without looking at the candy. Well today, F1…was…wait for it…Snickers!!! That equals total chaos!

But what about me? I was kind of just starting out and taking it all in, thinking I was in for the worst afternoon possible, after all that tension, until fellow coach Jeff Burt, a surfer guy if you know what I mean, and part of the infamous tennis playing Burt clan of Palo Alto, saunters up to my side and mumbles, “Best commercial for Butterfinger I’ve ever seen.”

Part 6. A Very Short Story entitled either “There’s that Certain Age Group that of Course, Knows Everything” or “There’s Always One”

Many of our junior tennis players have grown up with me here at the club. I’ve taught them, and driven them around to interclub matches, so they know me and feel free talking to me, which is usually a good thing. But sometimes…well, picture this…so during our year round after school clinic, on this particular day, the 4:30 class was pretty good and pretty competitive, i.e., if you were an adult and couldn’t move, then some of these little guys, ages 10-14, could give you a run for the money. So we decided to end the class with competitive team games. We’re going to break the class up into 2 teams, so we start picking teams and then we decided that coaches should play also, not for fun, but for more competition, so I’m in, and the first coach picked. Everyone on my team is happy to have me, and I would hope so too, right? But wait, no, actually, not everyone. One guy starts to cry out, “What!? You’re gonna pick Coach Darrick!? Are you kidding me!? Do you know how OLD he is!? They drop shot him and he’s TOAST!”

Wow…just wow…right then I had a revelation, a huge revelation, right then. Like the kind where you hear symphony music between your ears and the clouds separate and a ray of golden sun shines directly on just you and angels sing, and the revelation is this: Disney is real. Disney movies and animation are 100% real. Because you know how in Snow White the queen transformed to an old lady who walked really slow, and then transformed back? That happened to me. For an instant, I got so very old and decrepit, and then came back. Fortunately for everyone concerned I handled the whole situation super responsibly and super maturely, like I always do, because that’s the kind of coach I am. So I think I replied with something like, and don’t quote me on this, but it was definitely with amazingly thick skin and no trace of being defensive, because again, that’s the kind of coach I am, “Oh ya, well I am on your team, and by the way, who died and made you boss?”