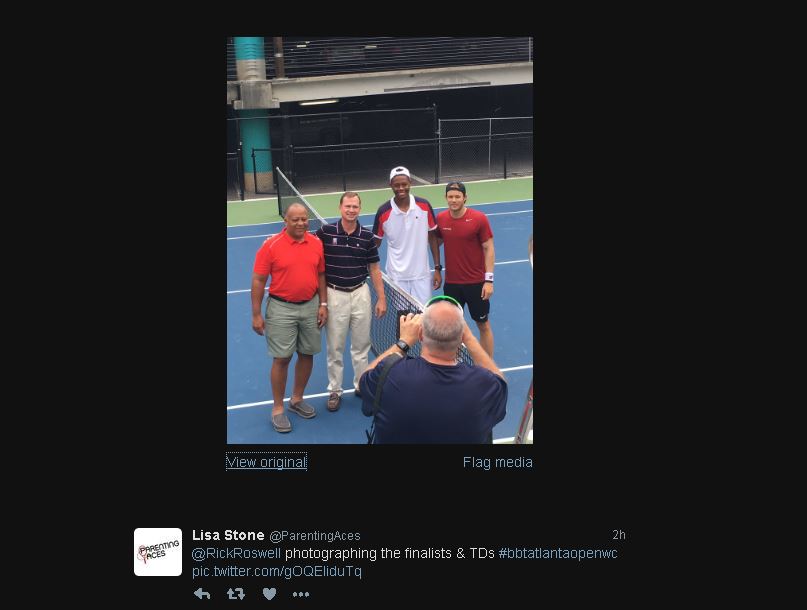 The past 2 days, I’ve been out watching some amazing tennis. No, I’m not in Toronto or Montreal at the big Tour events there. I’m in Atlanta, watching some local guys battling it out for a spot into the qualifying of the BB&T Atlanta Open.

A couple of years ago, Turhan Berne and One Love Tennis (based in Atlanta) created this really cool series of events leading up to our one ATP tournament that starts this weekend. They hold mini Men’s Open tournaments at locations around the city with the winners of each mini tourney progressing to the playoffs held on the practice courts of the BB&T Atlanta Open site at Atlantic Station. Most of the participants are top-level juniors, college players, and local teaching pros, so already you’re looking at a pretty high level of competition. By the time you get to the final 4, though, the level of play is incredible. Best thing about it? The matches are FREE and open to the public!

This morning’s match again went 3 sets. Dunkle came out on fire, going up a break early in the first set. Eubanks had the answer, though, breaking Dunkle right back to even things at 4-4. The first set went to a tiebreak with Dunkle coming out with the set after staving off mini-breaks galore.

Both guys started strong in the 2nd set, staying even through the first 6 games. That pivotal 7th game, with Zac serving, proved to be the game changer today. Chris converted on his first break point, let out a big yell, and never looked back, taking the 2nd set 6-3.

From there, it was all Eubanks. He quickly went up 5-0, helped by too many Dunkle double faults. Zac did hold once before Chris served to close it out 6-1.

Now, the real work begins! Chris will have to make his way through the qualies starting this Saturday in order to earn a spot in the main draw. He did receive a wildcard into the doubles main draw and will be playing with his high school teammate, Zachary Kennedy. Last year, Chris played doubles with tour player Donald Young, earning his first ATP ranking points along the way. I expect to see more outstanding play from Chris over the next several days as the tournament gets underway.

If you’re in or around Atlanta over the next week, do yourself a favor and come out to watch the BB&T. You can see the full schedule and buy tickets here. Hope to see you there!