It Was A Big Day For Chris 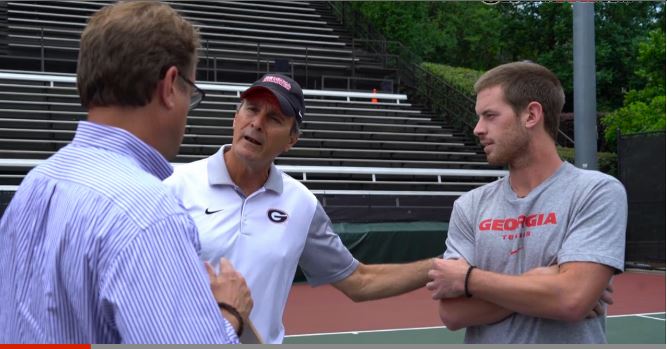 Eight Americans will take to the court as the 2016 BB&T Atlanta Open begins its run with the singles qualifying draw at the ATP World Tour 250 event on Saturday, July 30, at Atlantic Station. Matches are set to begin at 10 a.m., with play on both the Stadium and Grandstand Courts, and I will be there for the next 4 days watching and reporting on the action – if you’re there, please come find me and say hello!

Americans make up eight of the sixteen spots in the qualifying draw with 2 of the 8 coming from the Atlanta area. The BB&T really does an amazing job of showcasing our local talent and giving them an opportunity to test their mettle on the big stage. Each year, the tournament offers a wildcard into the main draw to either a UGA or GA Tech player, alternating between the two universities. This year’s college wildcard went to Austin Smith (click here to see the video announcement) who recently graduated from UGA and will play his first round match Tuesday during the tournament’s College Night.

Trent Bryde, a 16-year old from Suwanee will take on the No. 1 seed in qualifying, Thiago Monteiro, of Brazil on the Stadium Court’s second match. This will be Bryde’s 2nd year playing qualies after winning the Wildcard Playoff in 2015. Next on Stadium Court will be Georgia Tech’s Christopher Eubanks (who just won the 2016 Wildcard Playoff on Wednesday) playing 19-year old American Tommy Paul, who won the 2015 French Open Junior Boy’s title.

The last main draw wildcard went to ATP World Tour ‪#NextGen rising star, Jared Donaldson, who comes to Atlanta fresh off a 3rd Round appearance at the Rogers Cup in Toronto with a Top 40 win over Fabio Fognini.

Here is the order of play for Saturday:

Tickets on sale now at www.bbtatlantaopen.com.

About the BB&T Atlanta Open

The BB&T Atlanta Open is held each year in July in Atlantic Station and is one of eight summer tournaments in the Emirates Airline US Open Series. The tournament features men’s top world tennis players in singles and doubles competition. Approximately 40,000 fans attend the tournament and bring an estimated economic impact of $10.3 million to Atlanta. John Isner holds the 2015, 2014 and 2013 titles. Andy Roddick won his last ATP World Tour title when he defeated Gilles Muller at the 2012 BB&T Atlanta Open. Mardy Fish holds the title for 2011 and 2010.