On To The Semis!

Great News for an Up-and-Coming US Player 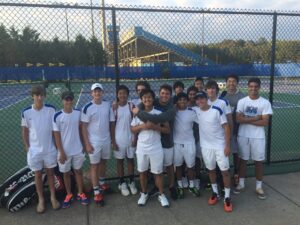 It all came down to our #3 singles player, Francis. Walton and Chattahoochee were tied at 2-all, and Francis and his opponent were battling in a 3rd set. Francis had lost the first set pretty handily then regrouped to come out fighting in the 2nd, taking it 6-2. But, let me go back to the beginning . . .

Our coach and the Chattahoochee coach had to flip a coin to determine who was going to be the Home team since both schools were the top seeds out of their respective regions. We lost the flip and had to make the 45-minute drive northeast to Alpharetta, a suburb of Atlanta. I drove my son and two of his teammates. The guys were relatively quiet on the ride, maybe feeling the nerves inherent in taking on a tough opponent. I tried to stay quiet, too, but my adrenaline was pumping. I was really excited for this one!

Once we arrived on site, Coach Evans got the boys on the court to warm up with each other before their opponents were ready to start the match. Chattahoochee has 4 beautiful courts with bleachers for pretty decent viewing, so the atmosphere was great. Hooch had quite a large cheering section assembled – ours was a little weak due to the distance of the match, but we held our own. It’s amazing how much noise a few parents and tennis players can generate. The Walton roster has 14 players this season, so there are plenty of boys to cheer on the team during any given match.

As I mentioned in my last piece, Hooch has some top-level tournament players in their lineup as does Walton. These were the match-ups (the Walton player is listed first):

The two coaches decided to put the 1s and 2s of both singles and doubles on the court first with the 3 singles to start once a court became available.

Kevin at 2 Singles got off to a pretty rough start. Colton was hitting a lot of winners, and Kevin never really found his rhythm. He lost 1 & 2, giving Chattahoochee the first point on the dual match scoreboard.

Morgan finished next at 1 Singles taking out a very tough opponent 2 & 3 and putting Walton on the board. Meanwhile, our doubles teams were both fighting hard.

Crews and Trevor lost the first set 6-4 but battled back to take the second 6-3, keeping Walton’s hopes alive for a 2-1 lead. Jonathan and Raymond were in a battle of their own at 2 Doubles, winning the first set 6-4 and trying to stay on top of the score in Set #2, but their opponents weren’t giving up yet! Our boys finally got a break to go up and have a chance to serve for the match. It took a few tries before they could close it out, and Walton now led 2-1. Just one more match win to move on in the tournament.

All eyes were on Trevor and Crews as they fought hard to stay with their younger and very skilled opponents. Unfortunately for us, Steven and Kevin were able to close out the 1 Doubles with a 6-4, 3-6, 6-4 win and the teams were once again all tied up at 2 a piece.

As soon as the 1 Doubles match finished, everyone moved down to Francis’s court.

He was up a double break in the 2nd set, about to close it out and force a third. I found out at this point that, 2 years ago, Francis had also been the “clinch” point for the Raiders in the State tournament. Sadly, he wound up losing that match in 3 sets, a tough experience for anyone. This was his chance for redemption, and his teammates had profound faith in his ability to get the W for the team this time.

Francis broke Alvaro’s serve to start the 3rd set then held to go up 2-0. Alvaro served again, but Francis was in his zone and broke once again then held to go up 4-0. Alvaro held for the first time in this set. 4-1 Raiders at the side change. Alvaro was really trying to get himself back into the match, and Francis seemed to get a bit tight, allowing Alvaro back in with a service break, then Alvaro held again, tightening the score to 4-3. A hold by Francis pushed his lead to 5-3 but Alvaro also held, and the Raiders were now up 5-4 to serve for the match. After having double-faulted several times earlier in the set, Francis stayed so mentally tough serving it out.

The whole Raider team stormed the court, surrounding Francis, cheering loudly, and showing the kind of emotion rare in teenage boys. After shaking hands with their opponents, our boys formed a huddle and finished the evening with one last big “RAIDERS” chant. What a match!

The boys’ next opponents are still unknown. They’ll either play a team from South Georgia or one nearer to home, but we probably won’t find out who until Monday. The State Championship is still two matches away for all four of the schools in contention. As Coach Evans keeps saying, “One match at a time . . .”