Blast Off At Master’U Day 3 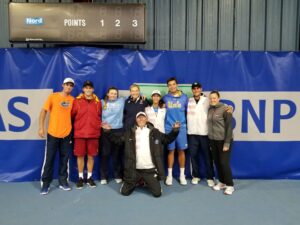 Each year, for the past 8 years, Boise State Men’s Tennis Head Coach Greg Patton has taken a team of top-ranked college men and women to France to compete in the BNP Paribas Master’U. In those 8 years, Patton has coached the US team to 7 victories. Patton and his co-coach, Melissa Schaub of Ohio State, are hoping to bring home the Big Trophy again in 2017. Read below for Patton’s account, posted on his Facebook page, of Days 1 and 2 in Lille. You can click on the thumbnail photos to see the larger image.

The USA National Collegiate team should be a case study for the impact on Sleep Deprivation on Collegiate Players and especially on road weary tennis coaches. 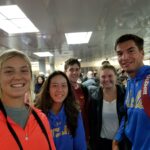 I say miraculously, for Thanksgiving Holiday flight delays had us worried if we would ever show up, much less then connect with a team flying from all over this massive nation of ours.

Wouldn’t you know it, that even with flight delays, the team all showed up at Charles DeGaulle Airport in Paris at the very same time to connect to a later train to Lille, France the site of the Master’U BNP Paribas Intercollegiate Championships.

Most of us west coasters were meeting at Los Angeles (what seems an eternity ago) on Monday, 5am. Roll em In, Pack it Up, Yea Rawhide!!

Tons of reading, watching movies, and worrying if the East Coast Contingent of Coach Schaub and Allie Sanford would meet up with us in New York. Smooth as silk sheet, they were there at JFK with their Ohio State and North Carolina) uniforms serving as a beacon for us to find them. 90 minutes of limbering up at JFK, and then off to Paris for our Red Eye. More movies, reading, and now only worrying that Alfredo Perez (flying to Paris from Atlanta) and Garrett Patton (flying from a connection in Miami) would arrive in time to meet us at the train station in Paris to make the train to Lille. The travel gods shone on us, for Alfredo was waiting for us at Paris (although we landed earlier, we went through two hours of security and customs which caused us to miss our train). We were frantically trying to text both the men, to only have them walk up to us at Charles DeGaulle with big smiles on their faces. Good omen to know that all the delays created was a smoother trip for the entire team to make the same train to Lille.

As soon as we reached Lille, we were whisked off to the Tennis Club for practice and lunch (get our legs under us, and the weary jet lagged heebie jeebies out of our bones).

Second we got to hotel at 4pm, we were all off to sleep. Woke up for dinner at 7pm and an interview with local media about the tournament. (Hard to know if my jokes passed okay through the interpreter and if the laughs were only polite groans. Tons of team building going on right now. Which basically means reasserting our goals to 1. play great tennis 2. Win the World Championships for the 9th time in the past 10 years 3. Become closer friends 4. Develop their games to reach new heights by competing in the World Team Championships.

**Lille is still resonating in the glow of the French National Davis Cup Team winning the 2017 Davis Cup competition with a 3-2 victory over Belgium. So, nothing could be better for the enthusiasm and joy after the French victory in Lille is buzzing like a bunch of Honey Bees!

Getting late here now, team is off to sleep, and coaches need to catch up on their shut eyes as soon as possible. Tournament play starts on Friday, so only two days off training, some site seeing, and tons of team building activities left.

By The Way……Nations that qualified for this International Team Championships are: France, United Kingdom, Ireland, Belgium, China, Germany, Russia and defending World Champs….USA!

Coach Melissa Schaub (Ohio State) and I had a day in Coaching Heaven. Two great workouts with our American National Team here in Lille, France getting ready for the fireworks to begin on Friday.

I love these Wednesdays, for it is a day when the players truly start to blend into a team. Although the players were still shaking off the effects of a brutal day of over 24 hours of travel to get to Lille on Monday, they jumped onto the courts as though it was a dance floor and they started boogying to the music. Our dancing with the stars Wonder 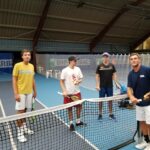 Practice was intense, focused, fun, and exhilarating. We get two courts in the chilly confines of the French Indoor courts and before you knew it, the courts were sizzling to the beat and rhythm of balls ripping off the rackets. Coach Schaub and I were tapping our feet to the beat of the balls off the court. Can’t beat that feeling of seeing players preparing for the upcoming battles. We threw some games in there, and the competitive juices were flowing for our players. Nothing like ending practice with some dingles (Teams consisting of two players on each side starting the point with two balls in play, once there is a miss with one of the balls, the game turns into a doubles point). Throw in some soccer tennis and we capped off the practice session with a “One Point Tournament” battle of the Sexes, in which each tournament match is only one point and was won by our Wonder Woman Alle Sanford. (now we are talking about the Pressure of One Point!).

Meal times of lunch and dinner are just not a grab some food and down the hatch it goes. Every time we eat, we are focused on team building interaction, which goes into the details of what playing for your country means, the tradition and history of the Master’s U BNP Paribas tournament. The fact that we have won 7 International Championships the past eight years and the legacy that they are playing for.

Great People make Great Teams and Great Teams produce Great Players! Amazing what two days of travel, three practices and tons of hours talking about favorite movies, dream concerts, and the journey of their lives to this certain point of playing for your country. I am elated as I am witnessing these players from around the country who spend the majority of their collegiate lives competing for championships against each other, molding into a team. To see them enjoy each other’s company and become close tight friends is magic to behold. There is some delightful ribbing about each other’s university teams, but also invigorating to see how each player has wonderful things to say about their programs and schools. As the hours go by you can feel how they are truly present in this moment that their Team right now is Team USA.

Making Friends is an essential component of playing tennis if one is going to flourish in this game. The USA team is truly a part of the Master’s U experience. Yesterday, ,was one for me to greet my dear friends from the other countries and teams from the UK, France, Germany, Ireland, Belgium, China, and Russia. The best part is seeing the coaches whom I have coached against for the past 8 years and the returning players from each country. The past two days, also is the vital moments of checking the teams from each country and what new players are at the table of the tournament and who are the returning players for each National team. All I know, is that this tournament is loaded with some mighty fine talent with many of the players experiencing success on the ATP and WTA tours.

Last night (Wednesday evening) was extra special! Our American Team went to the Beautiful Center of Lille, to explore and celebrate in the Christmas Village. We trekked for two hours taking in the delights of Chocolate Crepes, 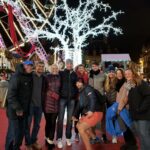 Waffles, Christmas shopping, and to top it off a chilly ride on a Gigantic Ferris wheel in the middle of the Historic Center of the City. All I can say, it was Awesome! The Ferris Wheel capped it off, for none of us truly realized how high it got until we were gasping for breath at the top of the ride. We could see for miles the lights of the Lille region.
Presenty (11am) we are getting ready to drive over to the tournament site for lunch and one more practice at two pm, and then the draw ceremony is at 5:30 tonight in which we discover what our draw will be. Due of our Championship fromlast year, we know we will be seeded one, which only means that we are aware that we have a big target on back. I already know that our players love the fact that everyone is shooting for us, it only means that the more intense and ferocious the competition, the more incredibly fun the battles are.

By the way, the format reminds me of the old time classic movie “They Shoot Horses Don’t They” which depicts the Dance Marathons of the Great Depression (Jane Fonda and Red Buttons starred). Our marathon each day is seven matches on one court with each match counting for one point. The matches start with the four singles matches (women #2, men #2, women #1 and men’st #1). They are followed by women’s doubles, men’s doubles, and finally the mixed doubles finishing up the day. It is like a day of watching the football bowl series during the Holidays from sunrise to way past sunset.

Get ready for here we come!