Blast Off At Master’U Day 3

Illustrated Introduction to the Rules of Tennis 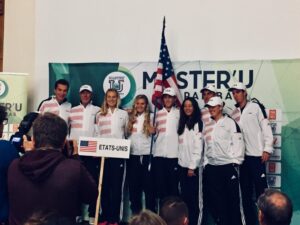 Each year, for the past 8 years, Boise State Men’s Tennis Head Coach Greg Patton has taken a team of top-ranked college men and women to France to compete in the BNP Paribas Master’U. In those 8 years, Patton has coached the US team to 7 victories. Patton and his co-coach, Melissa Schaub of Ohio State, are hoping to bring home the Big Trophy again in 2017. Read below for Patton’s account of Day 3! (Click here for Days 1 & 2)

Put your seat belts on folks, for the excitement for our American National Collegiate Team  starts with the very first ball that is struck tomorrow.  We had the draw ceremony tonight in the stately town Hall of Lille, France  and low and behold, we are playing France in the first round starting tomorrow.  This is could be the Championship match, for France has always reached at least the semis in the past 9 years. We have played them in the Championship match 5 out of the past 8 years.  They were seeded 5th this year due to the fact  they were upset as the #2 seed last year by a great Great Britain team that was decided on the final point of the final match in a thriller.

The French are already flying high here in Lille. For the French Davis Cup team just captured the Davis Cup Crown over Belgium in front of 27,000 screaming fans. I don’t know if our match will be 27,000 but I do imagine due to the history of our matches, that people will be screaming as well.

To play in this international team tournament  to be the best, you have to play the best.  We have incredible respect of the French team, . So we are going into this battle, with chin straps pulled tight.  The  intense rivalry between our top American Collegiate stars  with the French has been going on from the second I started coaching the Americans 9 years ago. Our American players pulling out  three of the our team matches in the ultimate final Mixed doubles match with the score tied at 3 all. “That is the way we like it”   Got to love it.  This won’t be a tea party tomorrow, but Rock & Roll Concert with the balls screeching the second we hit the shore of the tennis courts of this Northern French City.

We are ready to roll.  Great practice today. Got some deliberate training in during the morning session. After lunch we slipped onto some practice courts for some crunching doubles play (the doubles always determine the team winner in these crucial nail biting matches).  Just to keep the juices flowing and our team at a Heightened Sense of Living…..we combined our three women and three men into two teams of triples.  Got to tie your laces twice with this fast paced rocker, for our Americans were shooting missiles during this game.

Our team match with the French team will not be a sprint, but an all day long marathon that tests the endurance of all the players .  We play our entire match of seven matches on one court.  Setting the table for us will be:

**First team to win four matches wins the team match. We still play out the individual matches even when the team outcome is determined.

We had a Great USA team meeting tonight in which it was visibly apparent that our  players have an undying passion to play.  What I love about their passion is that it is fueled by purpose.  Clock is clicking, for our date with destiny is only several hours away.