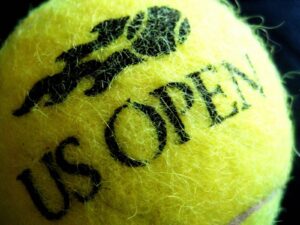 The US Open draws were revealed earlier today, and there are some very interesting first round matches, especially involving the college players and junior wildcards.

Let’s take a look at the women’s draw first.

Jen Brady, who left UCLA after her sophomore season, will take on veteran German player Andrea Petkovic, a former top-10 women’s player on the WTA tour. Jen had an amazing Australian Open this year, reaching the 4th round there, and has a real shot to at least equal that performance in New York.

To do that, though, she would potentially have to get past fellow young American Taylor Townsend who faces Romanian Ana Bodgan in her first match. Taylor has been playing well during the US Open Series this summer – it would be fun to see her do well at our home Slam.

This year’s NCAA Champion, Brienne Minor, faces Ons Jabeur of Tunisia. Brienne got a wildcard into the US Open Main Draw as a result of winning college tennis’s biggest tournament in May. She will also be playing in the US Open Collegiate Invitational which begins September 7th at the USTA Billie Jean King National Tennis Center.

The 2017 National Hardcourts Champion, Ashley Kratzer, who also received a wildcard as a result of that win, faces Tatjana Maria of Germany, another veteran player.

Eighteen-year-old Sofia Kenin faces fellow American Lauren Davis in her first round match. Both women are playing some good tennis right now, so this could be a fun one to watch. Another teenager, Kayla Day, also faces a compatriot, Shelby Rogers who has been on the upswing the past couple of years. And perhaps the best known of the teenage Americans, CiCi Bellis, faces Nao Hibino of Japan who has yet to win a singles match at a Grand Slam event.

Patrick Kypson, this year’s Kalamazoo champion, has to be pretty excited about his draw. He faces a qualifier in the first round with the chance to play Juan Martin del Potro if he wins. Nineteen-year-old Frances Tiafoe is hoping to learn from the maestro,  3-seed Roger Federer, in his first match at the Open. The two have played once before, at this year’s Miami Open where Federer came out on top 7-6, 6-3.

I will be keeping a close eye on Tommy Paul, too, who faces Japan’s Taro Daniel in the first round with a chance to play Rafa Nadal in Round 2. Tommy is having a great summer on the hardcourts, and I hope to see him do well in New York.

Chris Eubanks, a rising senior at Georgia Tech, received a USTA wildcard into the Main Draw and faces Israel’s Dudi Sela in his first ever Grand Slam match. I suspect Chris’s serve and forehand will pose some real problems for Sela! Chris is another of the players in the Collegiate Invitational.

Once the Qualifiers are put into the draws, I will take another look in hopes that more young Americans will make it through. So far, Sachia Vickery, former USC Trojan Danielle Lao, Allie Kiick, recent UVA graduate JC Aragone (who will also be playing in the Collegiate Invitational during the 2nd week), and Tim Smyczek are into the Main Draw with potentially more to come. NOTE: 17-year-old Wimbledon Jr Champ Claire Liu just made it through Qualies as well, and things are looking good for Nicole Gibbs and Evan King, 2 more former college players.

Main Draw matches begin Monday at 11am. If you haven’t already, be sure to download the US Open app so you can stay on top of all the matches, events, and results.