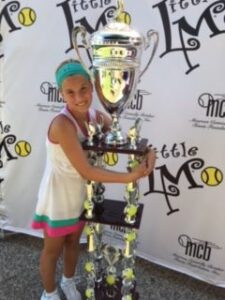 Before the US Open gets into full swing, I want to focus attention on the “Little Mo” Internationals in Forest Hills. The tournament finished this past weekend with lots of big trophies awarded and the winners of the Sportsmanship Awards and the Shannon Duffy Kindness Awards recognized as well. The West Side Tennis Club, host of the 2017 event, raised the Maureen Connolly banner at the famous stadium court where she completed the Grand Slam in 1953. She was the first woman to win the Grand Slam – winning all 4 majors in one calendar year (1953), and she is still the only American woman and youngest (age 18) to have accomplished this magnificent feat.

What exactly is the “Little Mo”? The “Little Mo” Internationals, put on by the Maureen Connolly Brinker Foundation (MCB), is one of the premier tournaments for boys and girls ages 8, 9, 10, 11 and 12. The “Little Mo” is unique in that it gives young players the opportunity to gauge their ability against others who are the same age. These events are designed to provide good competition for the younger player while also encouraging players to develop new friendships, learn good sportsmanship, and most of all, have fun.

The festivities began on Monday, August 21 with a complimentary clinic for all players on the historic grass courts of The West Side Tennis Club. Following the clinic was the spectacular Player Parade, whereby all players paraded onto the stadium court waving their country flags proudly. Zia Victoria sang the National Anthem and Maureen Connolly’s daughter, Brenda Brinker Bottum, was the guest speaker at the Opening Ceremony. Players competed in singles, doubles, and mixed doubles during the week.

There was a fun player party held at The West Side on Tuesday evening featuring a Beach Tennis tournament on hard court in addition to laser tag, music, a video game trailer with Wii games, and a special dinner on the beautiful patio at The West Side clubhouse overlooking the grass courts and stadium. “Little Mo” Tournament Chairman and MCB Executive Vice-President Carol Weyman presented the trophies. Wilson was the Official Ball and Racquet sponsor, and K-Swiss was the Official Apparel and Footwear sponsor. My Game Solutions was also an Official Sponsor of the event.

Srikar Polisetty from Alpharetta, GA, was a finalist in the Boys 10 division and

won the Boys 10 doubles with partner Noah Johnston. Srikar’s coach, Tim Seals, shared that his charge loved playing kids from Japan and Germany (and beating Lindsay Davenport’s son in doubles!). Srikar also loved practicing on the grass courts and wearing all whites, just like at Wimbledon!

Congratulations to all the winners of the 2017 “Little Mo” Internationals tournament: