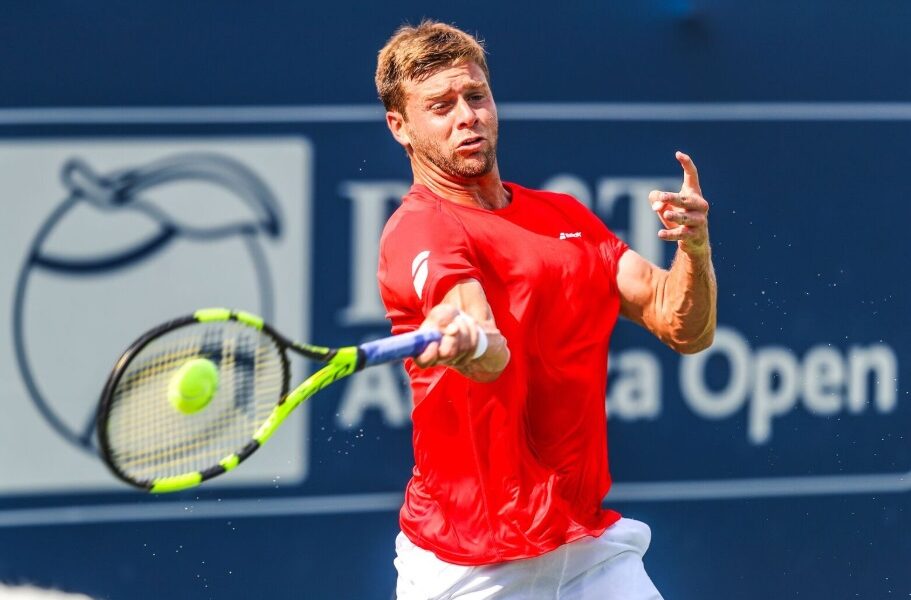 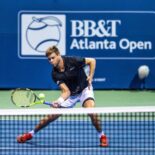 Yesterday was my last day at the BB&T Atlanta Open, but there is still tons of great tennis to be played! I hope you’ve been enjoying the Tweets and Instagram posts in addition to the daily updates here! You can find all my livestream videos from around the grounds on our YouTube Channel here.

Today’s matches start at noon and will be televised on ESPN2. It’s great to see two former college players in the singles semifinals! I know both Isner and Norrie will represent their schools well today. #savecollegetennis

It’s gonna be a warm one out there, so dress accordingly and be sure to HYDRATE!

Semifinals are Set: Isner vs. Ebden, Harrison vs. Norrie

Tennis fans should “buckle up” because Saturday could be a wild ride at the BB&T Atlanta Open, in Midtown, Atlanta.

The semifinal matches are now set: Isner vs. Ebden, Harrison vs. Norrie 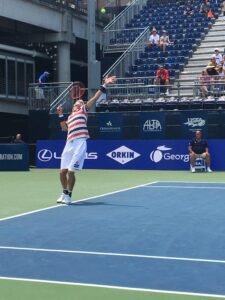 The Friday afternoon quarterfinal between Mischa Zverev and No. 1 seed John Isner was just as tennis fans expected. Both players routinely held through six games and the returners couldn’t get any rhythm. The first look by a player returning serve, came on Zverev’s serve at 3-4 as Isner had a slight chance at a break for 15-30. The veteran player never panicked and eventually held serve to even the match at 4-all. The set seemed to be destined for a tiebreak but sloppy play from Zverev at 5-6 gave the break, and set, to the No. 8 player in the world. 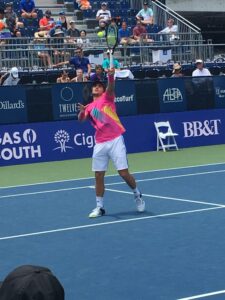 A combination of unforced errors and a beautiful backhand pass led to the completion of the opening set. Just like that, Isner was halfway to playing in Saturday’s semifinal slate. But Zverev wasn’t simply going to quit. After two routine holds, Zverev earned his first lead on the Isner serve. He used that momentum to bait Isner into unforced errors and an eventual double fault on set point. Zverev rode that wave to finish the set out at 6-4. The third set began with an easy hold for Isner, and was followed by beautiful returns on Isner’s part. Zverev’s serve was easily broken and the crowd could sense the match would soon belong to John Isner. Zverev tested Isner’s mental strength with multiple 120 mph serves, that proved too much at first. but Isner eventually broke again and took complete control of the entire third set. Serving at 5-1, Isner held at love and won the tough battle against a dangerous player He plays Matthew Eden tomorrow in the semifinals.

Arguably the best match of the tournament was played Friday afternoon between Hyeon Chung and Ryan Harrison.

Both competitors play the game very similarly and share similar tendencies on the court. Both the Korean and American have aggressive forehands, relatively flat backhands, and have great touch on their volleys. Chung and Harrison also both outwardly displayed frustration throughout the match. After the second point of the match, Ryan Harrison complained to the chair umpire about fans talking during his service motion. While chair umpire, Mohamed Lahyani attempted to quiet the fans in the BB&T suite, they continued to get under the skin of Harrison throughout the first game. Through all of this, Harrison held serve and began a set of 12 consecutive holds.

Opportunities for the returner were few and it was clear whichever ever player could turn offense to defense quickest would win the match. After each player held serve six times, a tiebreaker would be needed to decide the opening set. A 111 mph ace flew off Harrison’s racket to open the breaker and the American crowd was hopeful he would take that momentum and run with it. However, Chung elevated his game and responded with two serves of his own in the 110 mph range. Harrison became increasingly frustrated with the young Koreans play and eventually lightly tossed his racket to the ground. After a Chung winner on set point, the American destroyed his Babolat Pure Aero VS. However, Harrison found a way to channel this frustration and use crisp volleys to break the Chung serve on the first game of the second set. He then quickly consolidated the break with an easy hold.

The Louisiana native began to dominate the second set and at 1-3 pulled off a cheeky tweener cross court and won a huge point on the Chung serve. He broke the top-ranked Korean again and eventually finished out the second set at 6-2.

The final set of the match consisted of long rallies but relatively easy holds for both players. Harrison lost a breakpoint at 3-3 by running around a slower second serve and crushing a forehand wide. Chung then came up clutch by playing two great points and holding serve. This match was destined for a third set tiebreaker. While a fan would hope there would be a crazy race to seven points with dramatic line calls, long rallies, or something else, all they got was a few shouts of anger from both players. Harrison simply outplayed Chung and won the tiebreaker 7-5. After a match exceeding two hours, last year’s runner up earned a spot in this year’s semifinal. 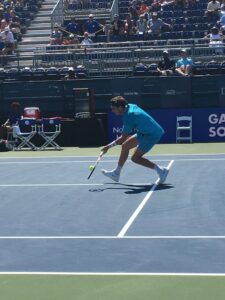 Cameron Norrie, the TCU alum, held off a tricky Australian opponent in Nick Kyrgios Friday evening. Norrie pushed strong through the first set and capitalized on his rivals lack of movement. Kyrgios was seen by the trainer at 3-4 in the opener. Afterwards, he seemed to maintain good form until several unforced errors caused him to lose his serve and the set. After Norrie won the first three games of the second set, Kyrgios retired from the match. Up next, Norrie will face Harrison for a spot in the final, after the 7-5, 3-0 Ret. win.