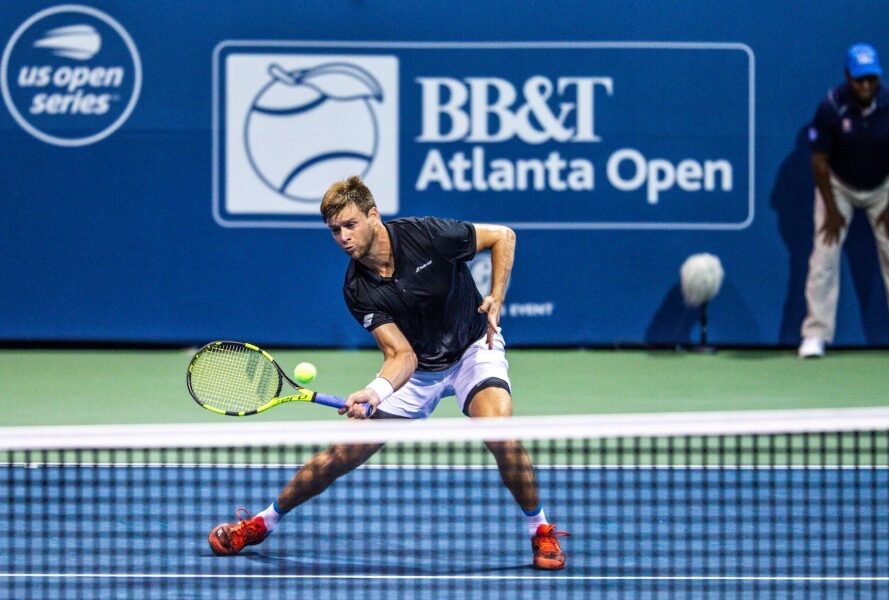 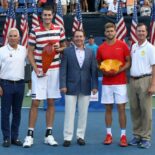 I’m no longer at the tournament but wanted to continue to update you on the happenings at the event. The Finals are today starting at 5pm ET and airing on ESPN2. With an American in each semi, we were guaranteed to have at least one in the final match, but we’re getting TWO! We could also wind up with Singles AND Doubles Champions representing college tennis (#savecollegetennis)! I’ll be keeping tabs from San Jose. You can find all my livestream videos from around the grounds on our YouTube Channel here.

Speaking of San Jose, as we were walking through the airport yesterday, Madison Keys was directly in front of us. I introduced myself and wished her luck in this week’s Mubadala Silicon Valley Classic which starts tomorrow (qualifying is underway now). She was so gracious!

The cream usually rises to the top come the semifinals of an ATP World Tour event, and that is no exception this week as the best two players all week are in Sunday’s singles final.

No.1 seed and four time tournament champion, John Isner defeated Matthew Ebden of Australia, 6-4, 6-7(6),6-1. Relying on his signature serve and powerful forehands down the line, Isner took the early lead in the first set and never let it up. Ebden rallied in the second set to break Isner early. He relied heavily on drop shots and avoided Isner’s forehand by keeping him on the move all over the court. Isner tried to fight back, but Ebden maintained the edge on the BB&T Tournament veteran forcing the set into a tiebreaker. Ebden took the second set due to a double-fault. During the third set, Isner recorded his 26th ace of the match in a convincing 6-1 victory. Isner will seek his fifth tournament title in tomorrow night’s singles final.

The semifinal match between the No. 8 seed Ryan Harrison, and the unseeded Cameron Norrie was an entertaining match to watch on a beautiful Atlanta night.

Harrison served first to start the match, but despite the advantage, Norrie broke his him right away, putting the score one game to none. The fifth game of the set was an enduring one, where the game reached deuce twice, and Harrison won the point, putting the score two games to Norrie’s three. Norrie broke Harrison’s serve yet again in the seventh game, and held his serve in the eighth game, which earned him the first set of the match 6-2.

As he has done all tournament, Harrison turned the tables in the second set; with a huge first serve and winning the first set. Norrie responded with an ace to win the second game of the set, putting the score one game all. The following three games go to the point’s respective server, but in the sixth game, Harrison wins the point with a drop shot, effectively breaking Norrie’s serve, and putting him in the lead. Norrie manages to earn another game to make the score five games to three, but Harrison pulls through and wins the second set six games to three. The third set begins with Harrison breaking Norrie’s serve, putting Harrison in the lead. Harrison wins the next game with straight sets, and despite a double fault, Norrie wins the next game. The match continued with each player holding serve, until Norrie double faulted a few times in the seventh set, allowing Harrison to win the set and break Norrie’s serve, putting the score five games to two. Harrison delivered an ace to win the match and advance to his second straight BB&T Atlanta Open singles final.

The No. 3 seeded duo, John-Patrick Smith and Nicholas Monroe, advanced to the BB&T Atlanta Open final with a 7-5, 4-6, 10-6 victory over Romain Arneodo and Jeremy Chardy. With the first set tied at 1-1, Arneodo and Chardy capitalized on two double-faults from Monroe get their break. Monroe and Smith continuously found the open court for winners to race back and take the opening set. The second set began just as the first. Arneodo and Chardy once again broke with the set tied 1-1. This time they took to net play to hold the lead and take the second set 6-4. With a trip to the finals on the line, Smith and Monroe jumped to a quick lead in the tiebreaker, and they did not give it up. Monroe secured the victory with a quick, short, cross-court volley winner.

Smith and Monroe will take on Harrison and Rajeev Ram. Harrison will be attempting to win both the singles and doubles on Sunday!