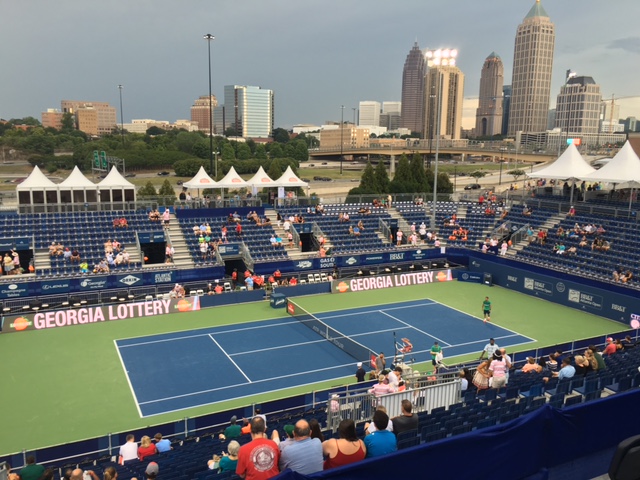 Today marks the first day of the Main Draw for the BB&T Atlanta Open, and we’ll have several Young Guns competing for a spot in Round 2!

First up will be Jared Donaldson taking on big-serving Aussie Sam Groth. Jared took a non-traditional route in his junior years, foregoing many of the USTA tournaments to develop his game in South America, which seems to be paying off in spades now that he’s on the pro tour. The 19-year-old is currently ranked 123 in the world which gives him direct entry into many of the ATP events. I haven’t seen him play since last summer, so I’m really looking forward to today’s match!

The other Young Gun match of the day will be qualifier Chris Eubanks (click here to read about Chris’s road to the Main Draw) taking on 18-year-old Reilly Opelka (ranked 556). This one will be a battle of the big serve-big forehand style of play as both guys are REALLY TALL and have REALLY BIG strokes! Chris stands at 6’7″ while Reilly clocks in at 6’11’ which definitely gives them both some extra pop when they step up to the service line. These two have followed very different paths with their tennis, Chris choosing to go the college route (he’s a rising junior at Georgia Tech) while Reilly went straight from juniors to the pro tour.

I’ll be out at the tournament most of the day and evening – you can follow me on Twitter and Instagram for periodic updates throughout the week. Also, be sure to follow the tournament itself on social media: @BBTatlantaopen. If you’re out at Atlantic Station, please come find me and say hello!

Here is a complete list of yesterday’s results and today’s schedule of play: