My day at the tournament started a little earlier than usual. I had met Andrew Carter, who was here as a player in the Qualies, the day before when we wound up sitting next to each other on Stadium Court. As we chatted, I realized his story was one I wanted to share, so I invited him to be my guest on the ParentingAces Radio Show. Thankfully, he agreed! We met in the lobby of the Twelve Hotel at Atlantic Station just before air-time, and had a great conversation about Andrew’s development through the juniors, his 4 years playing at the University of Louisville, and his life as a professional tennis player. Be sure to check out the podcast here.

After the show, I headed over to the courts and got to see some great battles! But, when the rain started moving in, it seemed to be a spoiler alert for the much-anticipated College Night festivities at the BB&T Atlanta Open. The radar looked like a bad acid trip, so I decided to head home to wait out the weather and an announcement from the tournament about whether the matches would be played or rescheduled. As it turned out, the weather cleared, the amazing tournament operations folks got the courts dry, and play resumed late in the afternoon.

The crowd on Stadium Court was full of red and black as UGA recent grad Austin Smith was slated to play Young Gun Taylor Fritz in the first match of the evening. Austin got his lone ace of the match in the first game, but Taylor jumped out to a quick double-break lead before Austin made his way onto the scoreboard. Neither guy was playing his best tennis – and the Hawkeye system certainly didn’t help Austin as he made a couple of incorrect challenges at key moments in the match – but Taylor was able to close out the match with an ace to take it 6-2 6-2 despite the rowdy fans cheering on the Bulldog. “It’s tough when you’re playing a wildcard and the whole stadium is against you,” said Fritz. “It makes it tough, but I was really happy I was able to play within myself and do what I had to do to get the match done in straight sets.” Taylor will play American Bjorn Fratangelo, who is currently ranked just outside the top 100, in the 2nd round tonight. 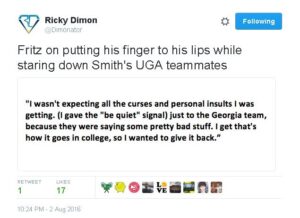 With the backup caused by the rain, tournament officials decided to move the other College Night match – a doubles battle between locals Chris Eubanks of Georgia Tech and Zack Kennedy of Georgia State vs. Thiago Monteiro (who Chris beat in the final round of Qualies) and Yoshihito Nishioka. It looked like the Brazilian-Japanese team was going to run away with the match, but our college guys buckled in for the long haul, forcing a second set tiebreak then winning the 3rd set Superbreaker 10-8. As you can imagine with that score, the stats were pretty even throughout the match, so I can only attribute the W to Chris and Zack’s hunger to help Zack earn his first ATP ranking point. For those of you who follow this tournament, you may remember that Chris earned HIS very first ATP point here last summer, partnering with his friend Donald Young to reach the semis of the doubles draw.

Here are the complete results from yesterday along with the schedule for today: