A little over a year ago, Reilly Opelka made waves in the tennis world as he became the second consecutive American to win Junior Wimbledon (Noah Rubin had won the year before). For quite a while before that, college coaches from the top programs were actively recruiting the tall kid from Florida. Life was looking pretty sweet.

But, after a lot of soul-searching, Reilly decided the time was ripe for him to pursue his lifelong dream of becoming a professional tennis player. Just before his 18th birthday, he signed with agent Sam Duvall of Lagardere Unlimited and has been on a steady climb up the rankings ever since.

I first saw Reilly play – and met his parents, George and Lynne – at the Junior US Open back in 2013. At that time, the media was constantly comparing Reilly to John Isner, both because of his height and his big serve and forehand. I had never seen a just-turned-16-year-old hit that big. I realized I was seeing the future of the pro tour, and it was very exciting!

George and I stayed in touch via the Twitterverse – you can find George there as @ChalkFlewUp – and had the chance to meet again the following year when he and Lynne and their daughter, Brenna, were in Atlanta during the NCAAs. College tennis was very much in consideration for Reilly at that point, and we parents chatted about the various schools, coaches, and other important factors that would go into both our sons’ final decisions.

Now, just 2 years later, Reilly is in Atlanta playing in the BB&T Atlanta Open as a Wildcard entry. His first-round match was against local player and Georgia Tech team member

Chris Eubanks whom he beat in two very tight tiebreak sets. In the second round, Reilly faced 3-seed Kevin Anderson, and it was another battle of gentle giants as the 6’11” Opelka out-aced the 6’8″ 30-year-old who played 3 years at the University of Illinois (and earned All-American status each of those years).

Yesterday, I had a chance to visit with Reilly and his dad, George, about life on the tour.

Reilly shared with me that, from a development standpoint, the onus is on his coach to put a plan in place and is on Reilly to implement that plan through hard work. “I just make sure I’m competing well in every match. It’s all I can do at this point. I try to win every point and every match I can. We’re always working on the transition game and on fitness, those are the main things. I’ve already hit so many balls in my life. Now, it’s just getting in the right mindset during the important points in the match.” 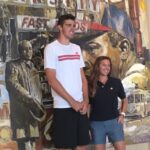 I asked him how he knew turning pro was the right decision for him. “I was in a good position to turn pro as far as from my tennis standpoint and also having a bunch of options with Sam Duvall – he helped me out a lot. So that was a big part of it. It’s just something I’ve always dreamed of doing,” he told me. The biggest challenges he faces as an 18-year-old on tour include both physical and mental aspects. “I haven’t been home in 10 weeks now, so that gets tiring. Physically, a 28-year-old knows his body much better than an 18-year old, so that’s tough. The training and recovery techniques have really changed so the older guys are doing a great job of taking care of their bodies.”

What advice would Reilly give to a 16- or 17-year-old weighing college tennis against the pro tour? “It really depends. Everyone has a pretty unique situation. It depends on their ranking and their results. I would say if you’re top 300 and your’e 17 or 18, then you should probably go pro. Or if you’re a top 3 junior and have won a junior slam, then, yeah, go pro. I feel like other than that I would recommend college tennis.”

I’ve really enjoyed spending time with Reilly’s parents and sister this week. But having them at a tournament is now a rare treat for him. Reilly explained, “It’s great support and great knowing they’re here, but it doesn’t take away from me doing my thing and taking care of business.” Dad, George, agrees, “Whenever I get to watch Reilly play, it’s bonus, because I don’t get to see him play that often. Our schedules just don’t jibe, and his matches aren’t always on tv!”

So, what are George and Lynne’s roles now that their son is a professional player? “In terms of tactics and strategy, I try to stay out of Reilly’s tennis now – he’s got a world of experience and smart people around him,” George said. “I don’t get caught up in wins and losses – he’s still developing. From a Dad standpoint, I sit back and try to enjoy the matches, don’t get nervous, just watch and have fun.”

But just watching and having fun is harder than it sounds, as any of you Tennis Parents out there can attest to! And it didn’t always come easy for George Opelka, either! “In the early junior years, I was probably Crazy Tennis Dad. But we really had some good mentors who put things in perspective for us pretty early. You realize you’re gonna be at hundreds and hundreds of matches and [your kid is] probably going to lose hundreds of matches, so you just get used to it. I used to focus on the outcome instead of focusing on getting better. But, thankfully, I learned!”

George and Lynne were lucky to have people around them giving them good advice. Now, they can share that advice with other Tennis Parents starting out on this long journey. “The one thing we did extremely well is we didn’t over-lesson; instead we over-played. We took the approach that tennis is like piano lessons: you take one lesson a week then you go out and practice what you learned. It was a financial thing for us – I wasn’t going to throw hundreds of dollars a week into lessons. Plus, we lived in Florida where we could find matches, courts were free, and learning to play on clay helped Reilly’s game.” When I asked him what he feels he could’ve done better during Reilly’s junior years, he responded, “We don’t have too many regrets. A lot of tennis parents, me included, get too much into it, too focused on outcomes and results. That didn’t last too long for me. Parents should drop their kids off and go to Starbucks and just let their kid play!”

The Opelkas have two kids, though, and only one played high-level tennis. I asked George how he and Lynne balanced their children’s very different interests. “My daughter, Brenna, is Reilly’s biggest supporter and fan. But her passion was dance. I’d like to think we supported her dance as much as we supported Reilly’s tennis. Both of our kids are great kids which made it easier. You just figure it out!”

Next up for Reilly at the BB&T Atlanta Open is another local favorite, Donald Young, who is currently ranked 53 in the world. They will be the third match on Stadium Court, probably going on around 4:30 or so. You can bet I will be there watching.

Here are the complete results from yesterday as well as the schedule for today: