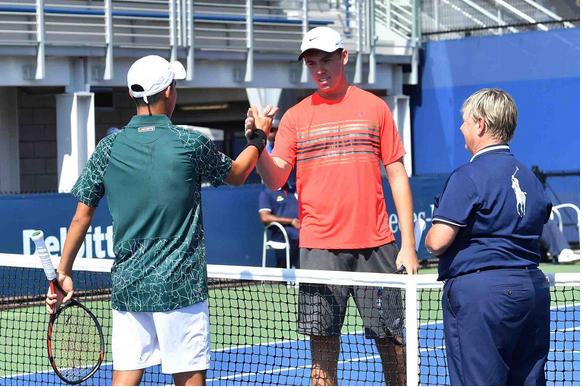 Day 7 saw the beginning of the US Open Junior Championships singles main draws at the USTA Billie Jean King National Tennis Center. In an effort to promote sportsmanship, all junior matches will feature pre-match handshakes between players, such as the one pictured above, between American Trey Hilderbrand and China’s Tao Mu.

Speaking of Trey Hilderbrand, I had the chance to chat with his dad, Mark, before the start of the match. You may recall my interview with Mark and Trey at last year’s US Open where we talked about Trey’s development process and the challenges of coaching your own child. Now, Trey is a freshman at the University of Central Florida (UCF) under coach John Roddick, and it is interesting to hear Mark’s thoughts on how things are going so far:

Tomorrow is another day filled with exciting junior matches. The doubles start tomorrow as well, so you will find me wandering the grounds in search of great tennis, great coaches, and great parents. Be sure to check the ParentingAces Twitter feed for hints on getting your FREE COPY of the new book, THE COMPLETE PLAYER, which includes my chapter on Tennis Parenting.

The Junior Championships will run through Sunday, September 9, with a number of notable storylines to follow:

You can follow all scores and results on the US Open website and app. Tip: On the app, tap on the Players link at the bottom then “favorite” the players you want to follow closely. You’ll be sent push notifications of those players’ scores in real time. The juniors are included in this feature this year which makes my life so much easier!