I’m about to share with you a tennis success story.

A few days ago I was scrolling through Twitter, trying to catch up on all the juicy tennis news, when I came across this: 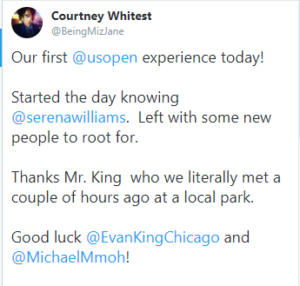 Naturally, I had to reply in hopes of finding out more. This was clearly a story worth investigating. I tweeted my email address to Courtney, asking her to contact me if she was interested in giving me the backstory of her tweet. She contacted me almost immediately. That led to a 45-minute phone conversation about her family’s first experience at the US Open.

Let me give the background first. Courtney and her husband are the parents of two sons, ages 9 and 11. She had signed them up for a summer camp sponsored by the USTA’s NetGeneration and the New Brunswick School District where they would be learning math and playing some tennis. The boys were very active in sports but had never tried tennis. In Courtney’s words, “They weren’t really sure what to make of it.”

One day, the boys came home from camp and announced they would be playing in a tournament that weekend. Neither Courtney nor her husband – who coaches several youth sports in their New Jersey community – had any idea what to expect, but they took the boys to play, and the boys had fun.

At the end of the camp session, the camp leader, Coach Larry, invited Courtney’s boys to attend Arthur Ashe Kids 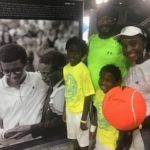 Day which was held last Saturday as part of the US Open. The entire family went to the event and spent an incredible day on the grounds where they even got to see Serena Williams on the practice court with her dog in tow. Coach Larry offered them tickets to come back to the Open during the week which they were thrilled to do.

After Kids Day was complete, the family decided to stop at an area park on their way back to New Jersey. At the park, they happened to meet Ivan King, father of University of Michigan standout Evan King who would be competing in both singles and doubles at the Open. [Side note: You may recognize Evan’s name as one of the forces 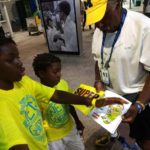 behind organizing his fellow college students to protest the no-ad scoring introduced by the NCAA a few years ago.] Mr. King talked to them about all the gifts tennis has bestowed upon his family, his son’s experience playing college tennis and now on the pro tour, and how the sport can teach lessons to use throughout life. The boys were entranced by this man who also happens to be a best-selling author and an incredible storyteller.

When the family returned to the Open on Tuesday, not only did the boys participate in an on-court demonstration as part of the NetGeneration programming, but they also found Mr. King and were able to sit with him while watching Frances Tiafoe play Adrian Mannarino on the Grandstand. That was it. Courtney’s boys were hooked! When they were able to sit and see Frances play while Mr. King walked them through each point, it was an incredible eye-opening experience not only for them but also for Courtney and her husband.

“The fact that tennis has now brought us out of the house and into the community, and we’re with Coach Larry now, it seems like a really big family, and I got that right away,” Courtney shared with me. “You’re walking around the US 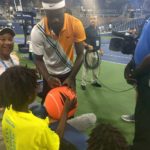