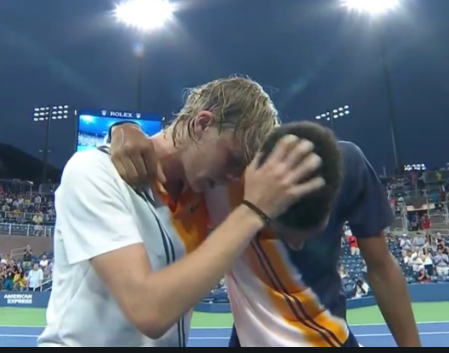 What a first day of the tournament – wow! We had top seed Simona Halep lose to Estonian Kaia Kanepi in straight sets. We had some amazing 5-setters, most notably Taylor Fritz’s comeback from 2 sets to love down to Mischa Zverev. We had the final match of ATP tour mainstay David Ferrer. And we had a lot of noise from some of the NextGen stars.

But perhaps one of the most important happenings, at least for Tennis Parents to know about, is the retirement of Canadian 18-year-old Felix Auger-Aliassime against his good friend and fellow Canadian teenager Denis Shapavalov. I was watching the match on ESPN3 yesterday, enthralled by the athletic and creative play from both of these young men. FAA, as he is known in the Twitterverse, had fought his way through the Qualies, defeating Oracle Grant Winner and former Georgia Tech standout Chris Eubanks along the way. This was his first US Open Main Draw match after having won the Junior event here in 2016. He was set to play his buddy on the Grandstand, one of the big show courts at the National Tennis Center. And he got off to a great start.

However, after losing the first set 7-5 then taking the 2nd by the same score, something happened to FAA. His heart started racing. He was feeling lightheaded. The media was reporting that he seemed to struggling with the heat, but it was more than that. According to this series of Tweets by Canadian physician Mario Elia, it was serious:

I just finished watching the Shapovalov/Auger-Aliassime match, and as a physician and fan of tennis, I’m absolutely furious with how that situation was handled. 1/

He told the health professional with the stethoscope that he felt lightheaded, his heart was racing, this has happened before, and that he was told before to lay down and put his feet up. She checked his pulse, and told him to do a valsalva. 2/

Quite clearly at this point he is tachycardic, and looking at previous reports, he has had episodes of tachycardia during matches in the past. Bottom line, without an ECG on the court, this is SVT until proven otherwise. 3/

Then she tries cold water on the face, another vagal manoeuvre. Then it’s not clear what she says to the umpire, but she allows the match to proceed. He holds his serve, but barely moves during his return game. Not surprising, the kid’s heart is running a marathon. 4/

Then he walks towards the chair, grabs his chest briefly, then starts to walk towards his box, clearly concerned about moving forward in this match. This poor kid feels like hell, but is in his first match at a major, and doesn’t want to stop. Thankfully, he stops the match. 5/

To allow an athlete with a history of tachycardia, who is clearly unwell, to allow to play under those circumstances, is unconscionable. So much debate about the utility of pre-activity screening, then an athlete having an active cardiac event is allowed to continue to play. 6/

This wasn’t heat. This wasn’t “nerves”. The kid was likely in SVT and he needs the adults around him to recognize this moving forward. And for god’s sake, kid, put some propafenone in that gym bag of yours. 7/

That said, as Mark Kovacs so aptly commented, “Cannot make a diagnosis over Twitter. We do not have the data or information. It is dangerous to speculate and jump to a conclusion without all the information and knowing all the facts. I was not on court and neither was anyone on Twitter.” While this is absolutely true, it goes back to an issue that has popped up this summer across the US with match withdrawals, penalties, and health concerns.

FAA clearly did not want to retire from the match. He clearly did not want to disappoint his friend and take away from his time in the spotlight. He clearly possesses an incredible competitive spirit and fought to find a way to continue. Ultimately, though, he realized his health was in jeopardy and he needed to pull the plug on the match and his first US Open. And his friend was supportive of that decision:

Other players retired from their Round 1 matches, as well, some due to heat, some to injury, but Dr. Elia’s tweets caught my eye this morning, and I wanted to share this story with y’all in hopes of helping protect the health of every young player out there.

Mark Kovacs is correct. We can’t diagnose over Twitter. And I’m not a doctor (nor do I play one on tv!). However, if there is any accuracy at all in Dr. Elia’s observations and recommendations, then maybe we can learn to recognize the warning signs of something serious going on with our own children’s health and keep them safe.

For a schedule of today’s US Open matches, click here. On a personal note, wishing all the best to Noah Rubin who is playing Mikail Kukushkin (Kaz) at 11am on Court 7. Noah received a Wildcard into the Main Draw and will be playing in front of a big hometown crowd, I’m sure!