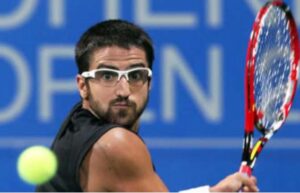 Here is another contribution from Coach Todd Widom. Enjoy!

In 1999 I had a good Easter Bowl finish in the boys 16 and under division.  Due to my results, I was invited by the USTA to go on a trip for three weeks to Europe and play some of the best 16 and under European tournaments on red clay.  I was very excited to say the least.  These players in the draw of these three tournaments were mostly from Europe and they were very good, especially on red clay.  I thought I was great on clay because I grew up on clay in south Florida and I was coached by Argentine coaches my whole life.  Being good on green clay in the United States and being good on European red clay are two very different things.

Some of the kids that I saw on that trip would be my competition on the ATP Tour a couple of years later, but there was one kid who caught my eye at the first tournament in Torino, Italy.  I did not know who he was, but I knew that if I played him, I may not have gotten games off of him.  He was that good and not only that, he was a year younger than me.  This guy was built like a monster from his upper body to his legs and he was sliding on these red clay courts like no other fifteen year old I had ever seen.  I thought I was pretty good at sixteen years old.  I was top five in the United States in the 16 and under division and already had some low level professional experience.

The boy’s name was Janko Tipsarevic from Serbia and thank goodness I did not play him on this trip because I was very certain this guy was much better than me.  I ended up taking a beating my second week in Milan, Italy from a guy from Switzerland (not Roger).  I lost 6-1, 6-1 to this guy and I thought I played well.  I was sliding well on the red clay and ripping the ball heavy and I got a lesson in about an hour.  This was my “ah ha” moment, that I needed to become much better if I had any chance of playing against the best players in the world on the ATP Tour.

Fast forward a couple of years to 2001 and many tough hours of training later plus a semester of college tennis at the University of Miami.  I met Janko in the second round of the Orange Bowl boys 18 and under, played on Key Biscayne, where the Miami Open aka the Sony Ericsson professional tournament is played.  I knew who he was but he had no idea who I was.  He was the number two junior player in the world and at seventeen years old he already had extensive professional experience.  I had little to no world junior ranking because that was an area I never pursued.  I was one of the top juniors in the United States and I had a little bit of professional experience, but not much.  On paper, he should have smoked me and he probably believed that he should have.  We start our five minute warm-up and he is warming up with his shoes untied.  Talk about no respect for me!  I looked at his shoes and then him, and it gave me more determination to beat him, which I did in a long tough three set match.

The moral of the story is that you should never underestimate anyone, even if you have never heard of them or seen them.  There are players that are phenomenal all around the world and they are very good, but if you put in the extremely hard yards and train focused you could be a top player.  There is no one right way to get there except by training hard and with a purpose.  We had two totally different paths between our junior careers and professional careers, but I guarantee he was working his tail off in Serbia trying to make it on the ATP Tour.  I ended up playing Janko in a challenger in California when he was ranked around 140 on the ATP Tour and I beat him again.  His shoes were tied this time in the warm-up.