What Made #TheSol So Different? 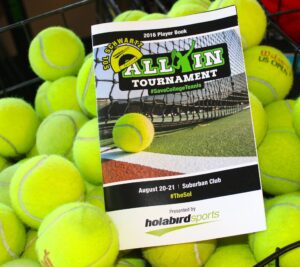 I don’t even know where to begin in writing about this past weekend’s Sol Schwartz #SaveCollegeTennis All-In tournament . . . aka #TheSol. I find myself at a loss for words as I attempt to describe exactly what transpired in Pikesville, MD at the Suburban Club. It was a junior tennis tournament, yes, but I feel as though we experienced something way beyond your typical weekend of matches.

I’m not going to re-tell my Sol stories here – y’all can read my previous posts and listen to my podcasts to get a feel for who Sol Schwartz was and why we wanted to create a tournament in his honor. I guess the best thing to do is simply to recount the weekend to the best of my ability and hope that those who were present will chime in with Comments to add depth of meaning to what was surely the most special tournament I’ve ever attended.

I arrived in Baltimore on Friday afternoon, and Melanie Rubin, who was part of the planning committee, picked me up on her drive in from Long Island, NY. We went directly to the Suburban Club to check out the space and figure out how best to set up for the weekend. After hanging our tournament and sponsor banners, we grabbed a quick (albeit very late!) lunch at Panera (how appropriate given the hundreds if not thousands of meals I ate there during my son’s junior tennis years!) before meeting Sol’s sisters-in-law, Laurie and Sherri, back at Suburban to complete the player goody bags and figure out our strategy for the next morning’s tournament check-in.

Melanie and I had our stuff spread out all over the pro shop but finally got organized to the point where we felt comfortable leaving for the night. We stopped by our hotel to check in and unpack, grabbed dinner at a local sushi spot, then both fell asleep to the sights and sounds of the Olympics on tv.

The next morning we got up early to dress, eat breakfast in the hotel lobby, and get to Suburban before the players started to arrive. When we got to the club, there were already a few players warming up on the courts, and Sol’s mother-in-law, Ina, was waiting for us outside the pro shop. Once Eric, the staffer on duty, arrived to open up, we got to work with tournament director Salman Bader from UTR organizing the draws, player credentials, goody bags, t-shirts, and

drinks. As each player checked in, Ina was in charge of handing out their credentials, I checked them off the player list, and Melanie handed them their goody bag and tournament shirt. They were then free to go warm up or just hang out and wait to be called for their first match.

Let me talk about the player goody bags for a moment . . .

These were NOT your usual junior tournament player gift! Here’s what every player got – inside of a racket-sized nylon backpack from Holabird Sports:

At promptly 9am, the first matches were sent on court amid blue cloudless skies. The weather couldn’t have been any more perfect. Sol was working his magic from above! With 32 players, we had 12 matches at 9, another 4 at 10:30, and then a nice break to enjoy the delicious lunch provided by Steve’s Deli.

During lunch, it was amazing to walk around the club and see kids sitting together, parents sitting together, and Sol’s friends and family taking it all in. In most tournaments once your child’s match is finished, you’re rushing off to find them something to eat so you can get them back for the next round. Not so at #TheSol! We wanted to honor Sol’s commitment to creating a sense of community around junior tennis, and providing lunch on site was just one way we accomplished that goal.

Round 2 took place in 2 shifts after lunch, and Day 1 finished around 2:30. Many of the players hung around to hit a little more, but most went their separate ways as Melanie, Salman, and I cleaned up and got everything ready for Day 2. That included going back to the hotel (and my laptop!) to set up a Facebook page (click here) for the event and get the gazillion photos (click here and here) Melanie had taken uploaded! That night, Sol’s wife, Ilene, and her sister, Sherri, took us to dinner at one of their favorite Italian restaurants. Let me just say that the wine and brownie sundae were especially delicious!

We didn’t have to get quite as early a start for Day 2 since matches weren’t scheduled to begin until 9am. That said, when we arrived at Suburban, the courts were filled with players warming up, and the grounds were filled with parents, coaches, and spectators out to support this amazing event.

The weather forecast for Sunday was pretty iffy, but we got the matches started on time. Unfortunately, the rain came in right in the middle of our final round of singles, so we brought all the

kids into the pro shop for a special surprise: a FaceTime Q&A with Noah Rubin! He was gracious enough to take a little time away from his US Open Qualies preparation to chat with the players and answer their questions about how he trains, what he eats, what’s in his tennis bag, and balancing all the demands of a professional tennis player. The kids (and parents!) loved having the chance to talk with him!

As soon as the Q&A finished, Steve arrived with the day’s lunches, so we encouraged everyone to 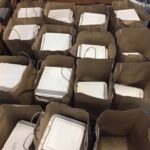 go ahead and eat while we waited for the rain to clear out. The staff at Suburban went to work helping get the courts playable, and by 11:45 we had the kids back out there.

It didn’t take long to crown our first winner: Kaitlyn Chalker from Marietta, GA! She was smiling from ear to ear as she heard about her

prize from Wilson: 2 rackets, a pair of shoes, 6 sets of string, a 12-pack of overgrip, a racket bag, and 2 outfits of her choosing.

A bit later, the boys winner was decided: Ramanaidu Kotnana from Ellicott City, MD. Ram also got the same Wilson prize package and was so excited!

But, we had 5 separate draws in this tournament, and the winner and runner-up for each draw received a prize. Our main draw runners-up got a $50 gift card from Holabird Sports (in addition to the $10 card in their goody bags). The winners of the other 3 draws each received a $20 Holabird gift card plus an additional small gift, and the runners-up received packets of string, hats, and socks. All of the awards were made possible through the sponsors we secured for the event.

We got a second bout of rain before the rest of the singles matches could finish. Thankfully, Suburban has a bubble with 4 courts, so we moved the rest of the matches indoors. By that point, the outdoor courts were sufficiently soaked, and we made the unfortunate decision to forego the afternoon’s doubles exhibition matches. The weather continued to worsen throughout the afternoon, so in retrospect it was a very good call.

All that was left was to clean up and get to the airport for my flight back to Atlanta. Sol’s family and the club staff helped out, and we left Suburban looking as though it had never been invaded by 32 players, their coaches and parents, and about 50 additional volunteers and spectators!

As I said, it’s difficult to put into words how this event felt. Even so, here are a few short (unedited – editing is outside my skillset!) interviews with some of the parents and players – as well as Sol’s wife, Ilene – to give you a better idea:

With massive amounts of help from Universal Tennis, I’m really hoping to make #TheSol into an annual event as well as to take it to other cities around the US. I think we have found a tournament formula that works! In all my years of schlepping to junior tournaments, I’ve never seen one where everyone just seemed happy to be there throughout the entire weekend. People were even smiling during the repeated rain delays. I’m not sure if it was allowing on-court coaching, the compass draw format, the player badges and goody bags, or what, but these kids had a great time and exhibited impeccable sportsmanship. And guess what? We had no officials other than our tournament director . . . nor did we need them!

the crabcakes!), Judie Schwartz, Cyndy Schwartz, Steve & Lisa Schwartz, Jake Schwartz, Josh Schwartz, Ina and Jeffrey Legum, Sherri & Gary Kassimir, Ali Kassimir, Laurie & Jason Sklar,  Skylar Sklar, Landon Sklar, and Dari Jo Sklar. To Sol’s friends who came out to support the tournament. And, most of all, to Sol for inspiring us to do better.