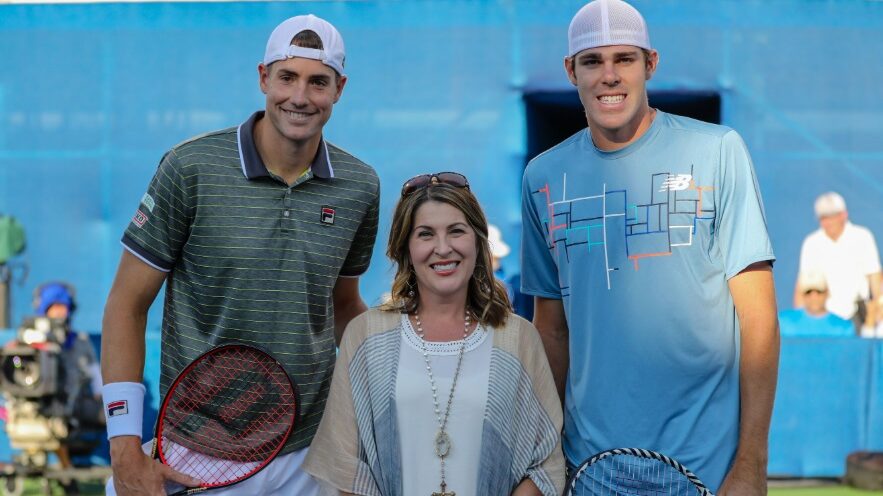 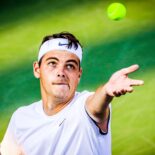 I had a bit of a wonky Day 3 at the tournament due to a late start on my part and having a podcast recording session previously scheduled smack dab in the middle of the afternoon. That said, I still got to see plenty of tennis and plenty of players!

Once again, I started my day at the practice courts since they are adjacent to Media Parking. As I was getting out of my car, I saw former Georgia Tech player – and recipient of the Oracle/ITA $100,000 Grant – Chris Eubanks getting warmed up before his practice session. He introduced me to Kevin King, another Tech standout, who had beaten Grigor Dimitrov the night before. After chatting with them and watching their warmup, I ran into Ryan Harrison. Here is some video from the practice courts:

I got settled in the lobby of the Twelve Hotel (the official tournament hotel) with my laptop and microphone so I could record an upcoming podcast. As I sat there, pretty much every player in the draw walked by. I have to admit, I was geeking out a bit!

Once the podcast was finished, I headed out to Stadium Court just in time to see British player Dan Evans play – and beat! – 6 seed Radu Albot of Moldova. They split sets just as Wayne Bryan was getting set up to interview another Australian player, Matt Ebden:

I went back for the conclusion of Evans-Albot then headed to the Grandstand Court to see the all-American doubles match between the Bryan Brothers and the team of Chris Eubanks and Donald Young who are both local to Atlanta. The Bryans came out on top of that one, but the Atlanta duo put up a great fight!

Here’s the official release from the tournament media office:

Second round action on Wednesday at the 2019 BB&T Atlanta Open presented by First Data.

That meant five-time champ, John Isner, under the lights on Stadium Court.

Isner was facing one of only two people he looks up to on the ATP World Tour, Reilly Opelka. When these two play, it usually means three tiebreakers.

After Opelka won the opening set, the second set tiebreaker was decided on a crucial Opelka double fault. Isner looked down and out a few times, but as he has done so many times in his career, he fought back.

Both players maintained a high level of play in the third, forcing a deciding tiebreaker.  Opelka was able to get a mini break and jump up 2-0. This lead would carry him through the tiebreaker. Opelka won the tiebreaker 7-5, for his third win over Isner in 2019.

Next up for the 6’11” Opelka is Dan Evans on Friday. This was Isner’s first loss before the semifinals in Atlanta.

No. 4 seed Pierre-Hugues Herbert opened up play on Stadium as he took on the 19 year-old rising Australian, Alexei Popyrin. Both players served very well to start the match. Popyrin lost only a total of two points on his serve in his first four serving games, while the Frenchman only lost three points in his first three serving games. Popyrin broke at 6-5 in the first set, taking advantage of three double faults from his opponent to walk away with the first set 7-5. Much like he did against American Denis Kudla in his first round match, Popyrin carried his momentum into the second set to get a quick break in just the second game. From then on, both players went on to hold their serve, but the early break for the Australian gave him an edge that Herbert was not able to get back. Popyrin rolls on without dropping a set into the third round.

The second-round match held between Cameron Norrie of Great Britain and Soonwoo Kwon of South Korea was a two-set match lasting just one hour and ten minutes.

Norrie was a presence on the court and jumped to a 5-2 lead. Although Kwon would win the following game with an ace to end the final point, Norrie would win the first set with a final score of 6-3.

The second set started with Kwon winning the first game, giving him an early lead. Norrie was next up to serve, and took the game with strong final passing shots. The trend of Kwon and Norrie holding serve would continue until the score reached 3-3. Norrie would break Kwon’s serve in the seventh game, and held to win the eighth game, making the score 5-3.  That break would be all Norrie needed as he closed out the match with an ace.

The Bryan Brothers were also in action on Wednesday

As the Bryan Twins stepped on court they were the crowd favorite, at a packed Grandstand Court, despite playing a hometown team in Donald Young and Chris Eubanks.  The veteran team would draw first blood at 2-2 in the first set to secure the break. The next service games did not come easy to the Bryans as they had to save a breakpoint at 4-3 along with three more while serving out the set at 5-4. The missed breakpoint opportunities seemed to still be fresh in the mind of Eubanks and Young as they were broken in the opening game of the second set. Bob and Mike would secure another break to set up the opportunity to serve out the match at 5-2 in the second. As Bob hit the put away volley they did their world renowned chest bump celebration much to the delight of the fans and they comfortably move onto the next round.