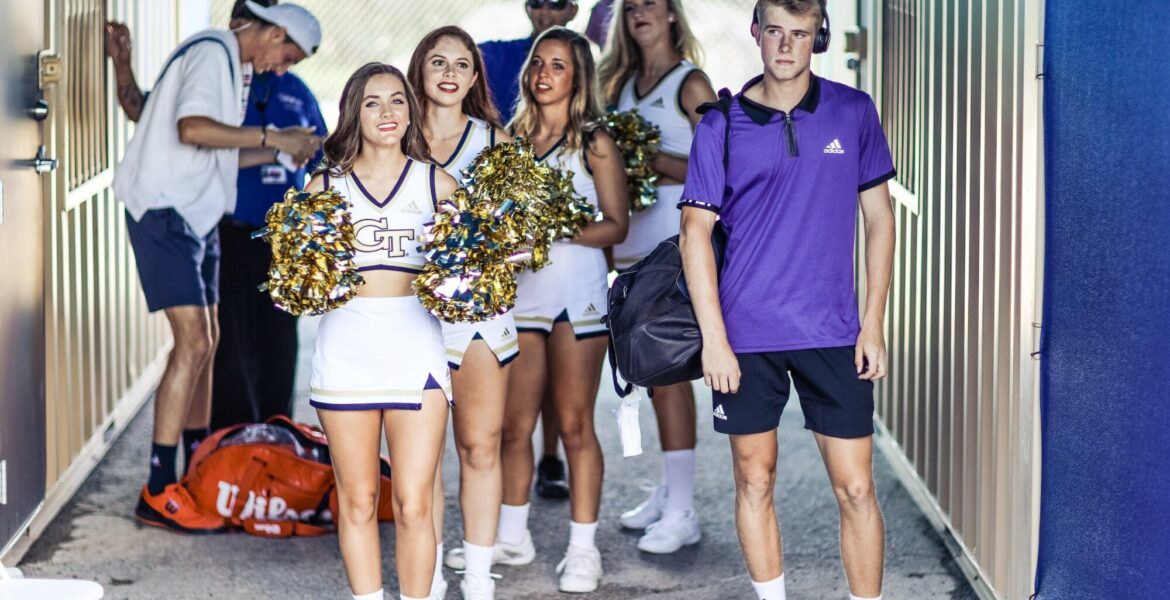 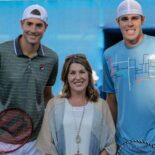 Day 2 proved to be just as fun as Day 1 at the BB&T Atlanta Open! After a rain-induced delay to the start of play, the weather for the rest of the matches was noticeably cooler and breezier than Monday, thank goodness!

As I was walking past the practice courts from the parking garage, I saw the Bryan Brothers hitting. Sitting courtside were their parents, Wayne and Kathy, who were gracious enough to chat with me:

I made my way to Stadium Court where I arrived just in time to see American Reilly Opelka (click here to listen to my interview with Reilly’s dad, George) take on Alexander Bublik of Russia. At one point in the first set, I felt like I was sitting at a Junior match!

Reilly was serving, and his first serve was called out. Reilly asked the chair umpire if the serve was wide or long, and the chair said he was not sure, so Reilly challenged the call – the serve was good. Alex complained that Reilly took too long to challenge, to which the chair said it was within the time limit. Alex tossed his racquet on his chair and said, “Then I’m not playing!” and sat down. In response, Reilly walked to the Ad Court and hit an underhand serve, a shot Alex has been using to great effect in recent matches.

Since Alex refused to leave his chair, the umpire called the Tournament Referee to the court. I couldn’t hear the conversation, but I assume the Referee told Alex to continue playing, which he did. Reilly lost the Ad point but wound up holding serve and eventually winning the match.

At the end of the match when the two guys shook hands at the net, there was a friendly exchange between them. In the post-match interview, Reilly was asked about the underhand serve. He explained that he was “just messing with” Alex and that everything was fine between them. The whole thing brought back so many memories of watching Junior Tennis!

Now, here’s the official release from the tournament media office:

But first, some day matches to wet your appetite. Matthew Ebden from Australia and Polish upstart, Kamil Majchrzak. The match started under the clouds at Atlantic Station, but the weather was not an issue once match play started. The first set went to a tie breaker after both players traded breaks throughout the set. Ebden found himself two set points down but saved both of them with ‘’one two punches’’ to force a tiebreaker. Here as well, the players traded mini breaks but it was Ebden who came out with the first set win after Majchrzak double faulted. In the second set, Ebden struck first in the eighth game to go up 5-3 and serve the match out. On to the second round of the 2019 BB&T Atlanta Open presented by First Data.

The very next match saw American youngster and 2019 New York Open Champion, Reilly Opelka and Newport finalist, Alexander Bublik. Opelka came out ready to play winning the first seven points of the match. Bublik proved to be resilient fighting off triple break points in his first serving game to hold. Bublik faced seven breakpoints in just three serving games, and would end up facing a total of nine break points in the first set. He could only save eight of those. That one break, was all the 6’11’’ American needed to capture the first set 6-3. In the second set it was once again Opelka that saw his first opportunity to break his opponent. Opelka seized his opportunity in the very first game to break and grab 1-0 lead. Opelka would hold onto that break until the sixth game when Bublik stayed solid to come back and even the set out at 3-3. In the middle of the second set, Bublik changed his game plan for his serving games. He started coming to net after every serve. This proved to be a good tactic as he forced a tiebreaker at the end of the second set. Opelka however, was too solid and would take home the tiebreaker and match 6-3 7-6(1). He will face compatriot and tournament favorite John Isner in the next round. 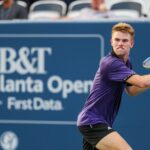 In the annual College Night match, Georgia Tech player, Cole Gromley, took on No. 8 seed, Ugo Humbert. In front of an electrifying crowd, this was a match both players won’t soon forget. Gromley a rising sophomore at Georgia Tech battled the 21-year old Frenchman. Gromley saw his first opportunity to take the lead in the ninth game, but Humbert hit some big serves to take away the Yellow Jacket’s opportunity. With the entire stadium court supporting him, Gromley embraced his opportunity and raised his game to challenge Humbert to a first set tie breaker. The Frenchman shut down the Tech crowd with big shots and cruised through the tie breaker to take home the first set 7-6 (2). Humbert would keep his tiebreaker momentum going to the second set and broke his opponent in the very first game. The Frenchman’s tour experience was too much for Gromley and Humbert took the second set home in a professional manner 6-1.

King for a Day

Metro Atlanta native, Kevin King, a two-time All American at Georgia Tech needed a wildcard to get into the BB&T Atlanta Open presented by First Data qualifying draw. He made the most of the opportunity as he scored the biggest upset of the tournament, defeating Grigor Dimitrov 7-5 6-4.

Kind used his lefty serve and mixed in deep groundstrokes to keep the Bulgarian off balance. This was King’s first ATP World Tour level singles win.