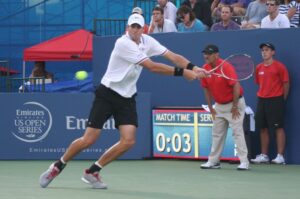 Via press release from USTA Southern:

WHAT: Youth Tennis Clinic, with the YMCA of Metro Atlanta

Between 18th and 19th and Market Streets

(Atlantic Station is the site of the BB&T Atlanta Open)

Between 90-100 local children in the YMCA of Greater Atlanta tennis program will hit with local teaching pros, interact with the tournament’s top-seed John Isner, have lunch and watch tournament matches.

Emirates, the world’s fastest growing airline, has partnered with USTA Serves, the national charitable foundation of the United States Tennis Association (USTA), to bring the fun and fitness of tennis to children across North America as part of “Emirates Returns.” The program, a grassroots charitable initiative connected to the Emirates Airline US Open Series, provides underserved youth in the various Series markets access to the sport of tennis as well as opens up educational opportunities.

A key component of the initiative includes a charitable donation of cash and new tennis equipment for each tournament’s affiliated charitable youth tennis partner. The total value of the donation across all nine Series tournaments and the US Open is $140,000. From that figure, Emirates will make a total cash contribution of $90,000 to USTA Serves which will then be distributed to the designated local youth tennis organizations in the form of grants to fund tennis and education programming.