How the ITF is Failing Our Players 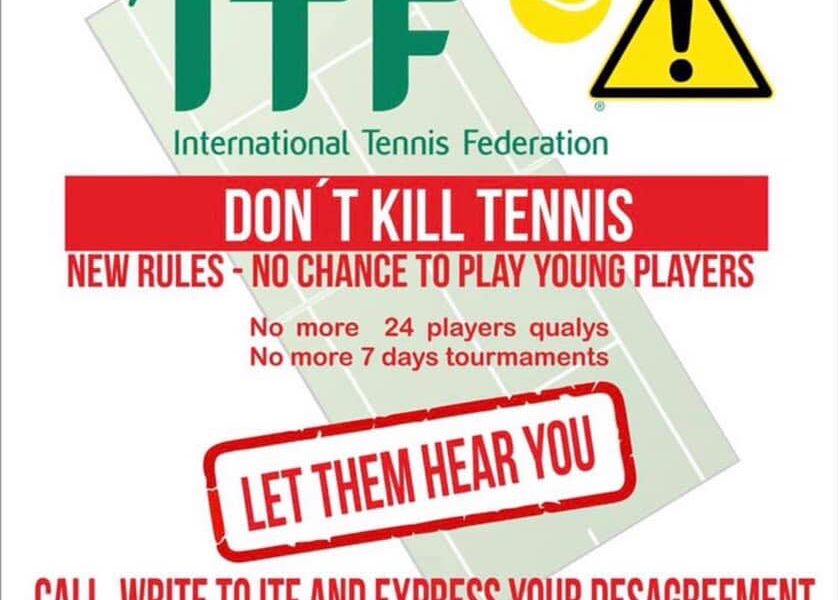 Straight From the Players’ Mouths

What in the world was the International Tennis Federation (ITF) thinking when it instituted this ridiculous World Tennis Tour in January of this year? Did the ITF Big Wigs really think this was the proper way to grow the sport? And, now that players, coaches, and parents are speaking out so forcefully against it, will the ITF make any changes? If it does, will it be in time to save the tennis careers of the hundreds of pros who are on the cusp of the rankings? These are all the questions that are being posed right now on blogs, social media channels, and elsewhere in response to the ITF’s 2019 changes spear-headed by former USTA President Dave Haggerty.

For a bit of history on this one, here are the published results (click here) of an ITF player survey to determine their thoughts on prize money and at what ranking level players should expect to be profitable on tour. Based in large part on this survey, the ITF created what is now known as the ITF World Tennis Tour which went into effect January 1, 2019. Click here and here for detailed information on the Tour from the ITF website.

In the next couple of days, I will be publishing podcasts recorded with both Shelby Talcott (referenced below) and the Hiltzik Family – Jared, Aron, and father David – players who are being directly impacted by this new ITF structure. In the meantime, it is important to note several top players, coaches (see posts from Toni Nadal – Rafa’s uncle and former coach – and Patrick Mouratoglou – Serena’s current coach – below), and even parents are speaking out rather forcefully in opposition.

Earlier today, a former member of the USTA National Junior Competition Committee, Geoff Grant, sent the following letter to the USTA Board of Directors:

To: USTA Board of Directors,

I write to you as a former NJCC member (2015-18) and Vice Chair (2017-18), a parent of 5 tennis players, a life-long fan of the game, and an American who for over 20 years has been immersed in various levels of competitive tennis. I may not have had a front row seat to all of the events leading up to this, but I was certainly sitting in the orchestra section.

Two months ago, in January of this year, the ITF launched the new World Tennis Tour with the dual goals of improving player economics and strengthening the integrity of the game at the lower levels – both worthy goals. The architecture of the new tour was developed over the past several years and unveiled in stages beginning in early 2017. The proposed changes were far-reaching and I was asked to chair a sub-committee to evaluate and report back on these changes’ potential impact on US junior tennis.  Around the same time in early 2017, the USTA formed a working group comprising PD, junior competition, collegiate, and pro-circuit stakeholders.

Our sub-committee performed some basic statistical modeling to predict what the new cutoffs might be, evaluated the adequacy of the US ITF circuit, and tried holistically to predict the potential impact of all these changes on collegiate tennis.

We concluded the following:

In short, the US would be left with no viable domestic pathway to either college or pro-tennis, accelerating the significant decline in participation we have witnessed over the past decade.

We presented our findings to the full committee. Separately, I spoke to senior USTA staff as well as two board members, urging the USTA to advocate for a pause in implementation until the downstream impacts on the game could be better understood. I received the same response in each case: the changes were part of a broad restructuring of the professional tennis pathway and were mandated under an agreement between the governing bodies of tennis and the Independent Review Panel. It had been agreed in advance that any recommendations would be implemented in full and immediately, and that there would be no delays. Martin Blackman confirmed this during his Sports Illustrated podcast at the Australian Open.

The IRP final report was released in December 2018 with 93 pages of recommendations. The conclusion was clear: the sale of live scoring data was the driver of almost all integrity-related issues facing the game. There was reference to strengthening the pathway, improving access for juniors, and eliminating overlapping events. The extreme changes mandated by the ITF went much farther than anything indicated in the final report.

You can imagine my surprise when I learned that the ITF had recently signed a $70mm data deal with Sportsradar to supply live scoring data all the way though to 2021. The most important recommendation of the panel was simply ignored. There would not even be a reduction in the amount of live data supplied to the gambling industry. The fiction that the circuit changes could not be paused or amended was now clear for all to see. The whole situation reeked of hypocrisy. I felt deceived and I assume the USTA did, too.

Shelby Talcott is a young aspiring professional tennis player. She publishes a blog about her tennis journey and she has kindly agreed to share the link as part of this letter. Sadly, what Shelby describes is not unique; her experience is horrifying and something no young player should be exposed to. This is exactly what the ITF, and by extension the USTA, is buying with their gambling association. It is a stain on the game.
http://www.shelbytalcott.com/blog

The facts now are:

There is only one rational explanation for the ITF’s actions here:  Faced with the prospect that the IRP report would put their gambling-related revenue at risk, the ITF felt compelled to do something “big” to demonstrate they were taking the recommendations seriously. In other words, the ITF decided to prioritize money over the rights and welfare of tennis players like Shelby Talcott. Intentionally or not, the USTA endorsed this approach.

The USTA can no longer sit on the sidelines. The jury may be out on the changes to the Davis Cup, but it is most certainly not out on the World Tennis Tour. In addition, the ITF showed remarkably poor judgement by recently entering into a data-sharing arrangement with a private academy and thereby possibly violating European privacy laws. It is clear new leadership is needed, something the USTA should support. The USTA is the most powerful tennis federation in the world. The fact that both the current President and Vice President of the ITF Board are former USTA Presidents appears as a conflict of interest. The USTA must both act and appear to act in the best interests of the game and its players.

THE USTA IS A PROGRESSIVE AND DIVERSE NOT-FOR-PROFIT ORGANIZATION WHOSE VOLUNTEERS, PROFESSIONAL STAFF AND FINANCIAL RESOURCES SUPPORT A SINGLE MISSION: TO PROMOTE AND DEVELOP THE GROWTH OF TENNIS. Today there are no metrics by which the organization is succeeding. Participation and membership have been declining for many years. The ITF and USTA’s indifference will simply accelerate that negative trend.

If you are wondering why you as the parent of a junior tennis player should be concerned about these changes, please listen to my upcoming podcasts with Shelby and the Hiltziks. They will shed light on how the latest ITF changes could trickle down to impact those still in the junior ranks.

In the meantime, if you are so inclined, please take a look at the Change.org petition here then share it with your tennis contacts. If you have other thoughts on this subject, you are always welcome to post them in the Comments below.