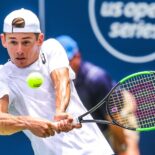 The Tennis Journey is a long and tough one, often resulting in stress and financial strain and parent-child conflict. Still, we persevere, supporting our children as they grow and develop through the sport they love.

Oftentimes, we question our decision to commit our families in this way, wondering if it’s all worth it. Wouldn’t it be easier if our child just played soccer at the local club or joined the school basketball or lacrosse team or simply played tennis recreationally in the neighborhood league? What if we didn’t have to spend the majority of our weekends traveling and sitting courtside while our kid did battle match after match, fighting for those elusive ranking points and plastic trophies that we so proudly display in our homes?

Believe me, during my son’s Junior Tennis Journey, I asked myself those questions over and over again, especially after a rough tournament weekend and a silent drive home. As the parent, you feel somehow responsible for your child’s disappointment after a loss, questioning why you ever agreed to let him go down this path in the first place.

I always told myself that ONE DAY I would have the answers. I knew from personal experience that tennis is a Giver of Gifts. Life lessons, friendships, confidence – these are all things I gained from my own Junior Tennis Journey a million years ago. But, when my son decided during his sophomore year of college that he would not continue playing tennis beyond that year, I once again started asking questions of myself. Had I pushed him to keep playing during high school, ignoring signs that he was ready to move on? Should I have encouraged him to go to college and be a regular student instead of a student-athlete as many of his Junior Tennis friends had done? Were the things I learned through tennis just personal as opposed to universal? Did my son harbor resentment toward me because of all this? 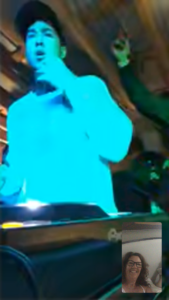 STØNE performing while I watched/listened via FaceTime (it was 6am my time!)

And then I got a text from my son. And I stopped asking all those questions. Because they were all answered in a digital message sent from 3000 miles away. “Just wanna say thank you for always supporting me in whatever I choose to do. The older I get the more I realize how lucky I am to have a mom like you.”

Because I know he had the confidence to go down a totally unfamiliar path and to get on a stage and perform in front of an audience of strangers in a new country due in no small part to his tennis journey. He was used to feeling challenged and uncomfortable. He was used to people watching him play. He was used to traveling alone and navigating new landscapes. That is the gift tennis gave him.

These days he is using that gift to follow a different path, and I have no doubt he will find success. He is a fighter. He is a hard worker. He is creative. He is a critical thinker. He is strong. He is fair. He has incredible stamina. He knows how to win. And all those traits are partly (mainly?) because of his years training and competing on a tennis court. Those traits will guide him as he finishes college and moves into the Real World. Those traits will lead him into a productive life, whether it’s in the music industry or somewhere else. And I will continue to be his biggest fan. Happy birthday, Son!