My Year-Long Rollercoaster Ride with Tennis 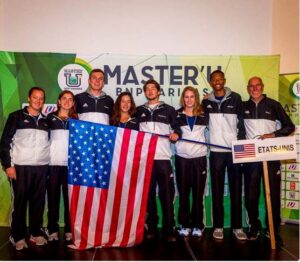 The following was written by Greg Patton, Head Men’s Coach at Boise State University and  8-time coach of the US Master’U Team. There is also an ongoing blog of the event posted on USTA’s website here. Go USA!

Our Collegiate version of the Davis Cup is now up and running.  The USA team of three elite women and three elite men’s collegiate players are getting some rest and relaxation before we start our semifinal match against the always dangerous and incredibly hungry German team tomorrow at the Master’s U BNP Paribas in Lille, France.

Today, we defeated a tenacious Irish team 6-1. In a nutshell, this team competition is a all day marathon match which consists of 4 singles (2 women’s matches and 2 men’s singles matches), followed by women’s doubles, men’s doubles, and mixed doubles.

We started our matches at 10am when Hayley Carter (University of North Carolina) played a flawless match against her Irish opponent (who ironically plays for Notre Dame). Next up was the physical and intense victory by Strong Kirchheimer (of Northwestern) over his Irish opponent (Texas Tech player) in a match that was reminiscent of a laser tag game. They were firing missiles at each other and Strong had too much fire power.  Our women’s #1 Francesca Di Lorenzo (Ohio State) was a maestro in her dominating victory which put us up 3-0. Tom Fawcett (Stanford) wrapped up the team victory at #1 singles.

Our doubles followed, and I must admit, we were all ecstatic with our women’s doubles team’s victory by Hayley Carter and Ena Shibahara (UCLA). The Irish men’s doubles team came out fearlessly to upset our two cannons of Chris Eubanks/ Tom Fawcett, but our team ended on a great note, with our mixed doubles win of Francesca Di Lorenzo and Strong Kirchheimer.

Special Kudos to Coach Melissa Schaub (Ohio State)  who in her rookie year as one of the coaches, has been absolutely phenomenal

As you can imagine, it is one long day of tennis from dawn to dusk. In addition to it being a long distance run, it can get pretty chilly in the Indoor Facility here in Lille.

The best part of the trip though is how the team is bonding immediately. It is one of the trade marks of the tournament for the American team. Our six players immediately embrace the team aspect and it is vividly apparent that they are playing for something bigger then themselves. The ultimate goal in addition to winning our 7th championship in the past 8 years, is to provide an experience that will resonate to motivate them to realize their talents and to come out of this tournament a better player.

Today (Saturday) we play Germany (who defeated 4th seeded Belgium). We always have finger biting thrillers with the talented Germans.  Last year, they had several match points against Mackenzie McDonald and Austin Smith in the Men’s doubles, but somehow our men fought off team match points to win and put our Mixed Doubles team in the drivers seat to clinch the match which was tied at 3-3.

The star of that match was our veteran Tom Fawcett and his partner Brooke Austin (from University of Florida) who sealed the victory and put us in position to capture the International championship the next day against the French team.

Our tentative lineup for the match against the Germans will be: (in order of match play starting at 10am French time:

The link to live scoring and the tournament is: