Why My Kid is Playing High School Tennis 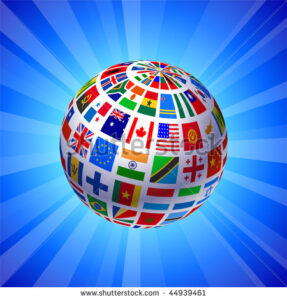 The Men’s ITA Indoor Tournament just ended. A public university, Oklahoma (6/11 US players), beat a private university, University of Southern California (8/12 US players), in the final. Why is that pertinent? Today’s Guest Post looks at the prevalence of international students on public university tennis teams (click here to read another recent article on this topic). The article is brought to you by a Fellow Tennis Parent who prefers to remain anonymous as her child is currently starting the college recruiting process. Please feel free to share your thoughts in the Comments below.

American tennis parents bemoan the fact that many college tennis rosters are filled with foreign players. After spending upwards of $15K a year for training for 6-10 years, many find their investment lands their student a preferred walk on spot on a D1 team or a spot on a DIII team with no athletic scholarships. Due to 10-15+ hours of training during the  week and tournaments at least two weekends a month, their student may not have had the time to take the toughest courses or study to earn the top grades for an academic scholarship.  NCAA and ITA have no interest in lobbying for reduced foreign roster spots. Parents of underclassmen may consider sending their players to ITFs to booster their chances to attract a college coach who selects recruits based on ITF ranking, but playing ITFs means missing up to a week of school, not a realistic prospect for public school players. What’s a parent to do?

Parents can lobby administrators at their state public university system, their state legislators, the presidents of the student organizations of colleges with majority foreign rosters, and the athletic directors at those same colleges. They can write the lead newspapers in their state. This is a pocketbook issue for American students and parents, and money talks. American taxpayers and/or student fees fund most of the budget for non-revenue sports on college campuses. Why should they be funding 100% foreign teams?  How will nonathletic students feel about their fees funding a coach’s recruiting trips to Europe and South America?

According to a January 2015 report by CBS 6 in Richmond, most students at public universities in Virginia pay at least a $700 subsidy from the student activity fee to fund athletic teams on their campus. The state’s Joint Legislative Audit and Review Commission (JLARC) discovered that 12% of students’ cost of attending public school in state goes to athletics. If you live in the mid-Atlantic section, you already have a legislator, Kirk Cost, looking into reducing the athletic subsidies from student activity fees: http://wtvr.com/2015/01/07/delegate-wants-to-reduce-student-athletic-fees-that-can-costs-kids-thousands/

We can work both to save college tennis and ensure spots for American players by asking for this same information in our own states.  Tennis is a sport that requires discipline, and most of the time, tennis players are also good students.  If you look at the roster of public university tennis teams for mid major D1 and D2, the few US players are primarily in state players because most are receiving 25% ride or less-some are preferred walk ons, but their tuition is low due to in state tuition and or academic discounts, e.g.  some states reduce tuition fees or pay tuition for the in state tuitions with a B+ average. If teams are composed of in state players, recruiting and scholarship costs could be trimmed to reduce the impact to nonathletic student fees and help ensure the long term future of the team on campus. If coaches continue to recruit mostly foreign players, they will kill the golden goose.  Foreign parents have no leverage to argue to save a team. In state tax-paying player parents do.

In my state, there is a local tennis organization with 80,000 members. I plan to write that organization and ask that they write an article in their bimonthly magazine that reviews the portion of international tennis players at each public university in our state. Those 80,000 pay taxes that fund our state colleges, and many have tennis playing children who they hope will play tennis at state schools sometime in the future.  If those parents realize at some state schools there are no US players, yet their tax dollars and their children’s activity fees are funding foreign programs-double whammy- they may want to use the clout of thousands of letters to promote change.

The writing is on the wall.  Athletic departments are cutting costs. Even football programs with winning records are being cut at some schools. We have more of an argument to keep college tennis if the teams are composed of smart in state students who will give back to the state in the future in the form of taxes.  The top D1 public schools in my state do a great job of attracting the in state blue chip and 5 stars with a few foreigners, and they still have very successful, fan watching programs.  We need to translate the success of the top D1 programs in using homegrown talent to the mid-tier and D2 programs.  If only a handful of programs limit foreign players, then the teams with majority foreign players will continue to win.  However, if over a period of time, grassroots state organizations of tennis parents work with the public university system, athletic directors, and college coaches to voluntarily reduce the number of foreign players on each team, all public teams will be on a level playing field, and majority American teams will have a chance to win championships even at the D2 level.

I think many American players 3 star or higher could compete with foreign players by their sophomore year if they had a chance to practice with foreign players their freshmen year. Many foreign school structures allow students to graduate when they are 16 or 17; they are finished after the equivalent of the US junior year in high school. 16 and 17 year old foreign players can sign up for an SAT class and English class and say they are still in school for NCAA regulations even though they have graduated. They can continue to compete for 12 months post-graduation.  They can play a full year of ITFs. How can public school attending players with a full load of courses compete with same age foreign players with a full year of ITFs behind them?  US players can only compete for 6 months after graduation.

One reason I believe US junior players are competitive with foreign players is data from the Universal Tennis. I can look at the ratings of current college players and the rankings of junior players. At many of the instate D2 schools with 0-2 US players, there are already 4 star junior players in 9-12th grade ranked at a competitive level of those college’s line 5 and 6 singles, yet those schools are not recruiting US players. Some D2 schools have strong relationships with overseas recruiting agencies that are paid by foreign parents; it is the path of least resistance for coaches to sign eager recruits from the same academies and/or countries that have provided successful recruits in the past. A hard-hitting article from a state newspaper asking those coaches why they are recruiting foreign players when there are similarly UTR ranked players available instate could force those coaches to take a second look.

We can use the power of social media to help our cause. Foreign players don’t have to be eliminated from teams. Most parents want parity; a chance for their US players to be an active participant, not a benchwarmer on a college team. Foreign players are poised, mature, self-starters; I have met several of them, and I can understand why they are attractive to college coaches, but they don’t deserve all the spots or the majority of the spots on college teams. We need to come up with a twitter tag, Facebook page etc.  Here’s one I came up with in 10 minutes: #50foreigninfive or #3F50 meaning that our goal would be for public university teams to have a roster of 50% or less foreign players which means 50% or more US players in 5 years, e.g. 2020/2021. The 50 in five could also mean 50% of scholarship dollars go to US players. I even came up with a potential logo. Since I don’t have a marketing background (I am a CPA ),  I would welcome any of you parents with a marketing or graphics background to create better hashtags and logos. Logos could be put on buttons, T-shirts, etc.  that parents could wear to tourneys, adult league events, etc. to promote discussion of this issue. 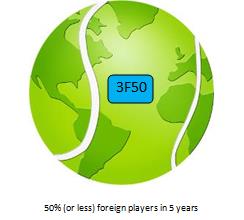 Don’t whine about your son’s chances to play on a college tennis team. ACT! Those of you with middle school players, please step up to help. Parents of players already of recruiting age may not want to sign letters to coaches or ADs, but they can do research and write legislators, state tennis organizations, state tennis pro organization. Here is your to do list:

This is a list of ideas that one tennis parent brainstormed in a couple hours. If we put our collective brainpower together, we can come up with multiple ideas to promote US players on college teams. Parents of daughters, I don’t mean to ignore you, please get involved. However, it’s the boys teams most in danger of being cut and/or losing American slots.

Here are some additional articles to read: