A Friend In Need 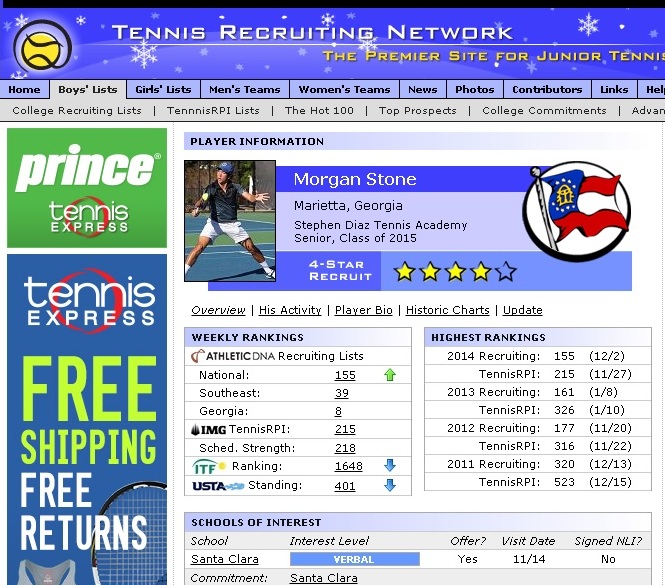 It’s been a long and often grueling process, but – in case you’ve missed all my posts on Facebook, Twitter, and Instagram (!) – I’m thrilled to announce that my son has committed to attend and play tennis for Santa Clara University beginning next Fall!

He has been dead-set on attending school in California for quite a while now. Yes, there were a couple of schools in Florida on his list, but Cali won his heart last December when he first set foot on the courts of the LA Tennis Center on the UCLA campus. The weather, the energy, the level of competition, the access to professional players – all of it felt like home to him.

The only part of California we were really familiar with was the SoCal area. My husband was born and raised in Los Angeles. He and I both went to college (and he also went to law school) there. Our first two children were born there. And our oldest daughter wound up moving there for college and has since made her home there. So, naturally, my son’s college search focused on the schools in and around LA.

About 2 months ago, though, it became apparent that things weren’t moving forward with the SoCal schools as we had hoped. While my son was getting offers from schools near our home in Atlanta, those weren’t schools he was interested in attending. He was focused 100% on getting to California, so it was time to expand the search northward.

He reached out to Ross Greenstein, who has been an unbelievable resource for all of us, to get suggestions of other schools to contact. He also reached out to Grant Chen, another unbelievable resource, for input. Between the two, they sparked an interest in University of the Pacific and Santa Clara University, both about an hour from San Francisco. My son emailed the two head coaches asking for a time to talk by phone and wound up having great conversations with each of them. They each invited him to come on an official visit, which he took last week right before Thanksgiving (click here to read my post on that).

My son arrived home from NorCal late Monday night completely exhausted from his trip. He had spent 48 hours on each campus, meeting the coaches and hanging out with the team. He went to a class at Pacific, went to parties at both schools, and managed to squeeze in some tennis in between since he was getting himself ready for the National Selection L2 starting the day after Thanksgiving. It was a lot, and he was feeling the effects.

As I had promised myself, I resisted the urge to ask a lot of questions the night he got home. The next night, though, we sat down as a family and talked about his experiences at each school, what he liked and didn’t like, and came up with a few more questions that needed answers.

I have to say I was very pleasantly surprised by the mature approach my son was taking to this entire process. Without my prodding, he had already written thank-you notes to both coaches. He had also come up with a list of pros and cons for each school which he discussed with us. But, he was still struggling over making a choice between the two.

The next day was pretty low-key. My son was on Thanksgiving break from school, so he arranged some match play for the morning while I spent my time in the kitchen preparing our early Thanksgiving dinner. Throughout the day, though, my son would come in to share a text exchange he was having with Ross or Grant and to discuss more details about his visits. He was hashing through his thoughts and feelings in a way that showed me he was up to the challenge of reaching the right decision without too much input from me or my husband. He simply needed us to be patient and supportive, so that’s what we tried to be.

While he loved both schools, there were a few big differences between them, and one stood out above the rest. At Pacific, my son would be going in with a possibility of playing in the top half of the lineup; at Santa Clara, he would be fighting for a spot altogether. In my mind, why wouldn’t he want to go where he knew with certainty that he’d be playing? He’s been saying through this whole process that he didn’t want to go to a school and sit on the bench. I figured he was going to choose Pacific, no question.

Here’s where my son truly surprised me . . . he chose Santa Clara, knowing full well he’s going to have to work his tail off to earn the right to play. He wants to have to prove himself. He wants to work hard. He wants to show the coach and his teammates what he’s made of.

At first, I didn’t get it. Why make life harder for yourself? Why not choose the school where you know you’ll be a valuable addition from Day One?

Then it hit me. My son has always been the kid who had to work harder than his peers. He’s never been the coach’s pet or the star of the academy. He thrives on the challenge of overcoming underestimation.

So, Santa Clara it is. He’s going to be a Bronco. And he’s going to have to work harder than ever to earn his spot in the top 6. He’ll be one of 6 American freshmen on the team next Fall, all of whom are hungry to play, and all of whom will be competing against the 3 remaining Bronco upperclassmen for that privilege.

For now, he’s focusing on getting through his senior year of high school and becoming a better competitor. He’s reaching out to his fellow recruits and starting to form those bonds that will take him through his college tennis years and beyond. And he’s already ordered loads of Bronco gear so he can start representing Santa Clara University with pride.

And me? Well, I’m reaching out to people I know in and around Santa Clara to make sure I have a place to stay and people to sit with when I go cheer on the team. I’m researching local restaurants and shopping spots. I’m plotting how to finagle a trip to the Wine Country on one of my visits. And I’m reveling in Parental Pride over how my son handled himself during this crazy stressful recruiting process.

A couple of years ago, Ross told me things would work out the way they’re supposed to IF I could just let go and let the process unfold. I didn’t believe him at first. I wanted to stay in control. Looking back now, I’m so glad I trusted him and his advice. My son has grown and matured in ways I never could have imagined. I’ve done some growing, too. This growth should serve us both very well.