Holiday Weekend at the US Open

I’m a little late to the party on this one, but I wanted to let you know about a very cool initiative from Wilson that’s continuing through the US Open Singles events this year.

In conjunction with the 2017 US Open Tournament, Wilson Sporting Goods Co., has partnered with the USTA Foundation to launch the “Ultra Aces” program to help fuel the Foundation’s efforts to grow the game of tennis in the U.S. The program has been created to demonstrate the powerful difference the tennis community can make when it works together to make the sport more accessible.

The program is off to a great start, despite the almost-total rainout on Day 2! Wilson is tweeting daily updates, and I saw this yesterday morning: 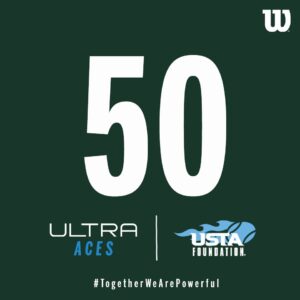 After yesterday’s 87 singles matches (!), I suspect that “50” will be a much bigger number once Wilson reports its update today!

While this current initiative is seated in philanthropy, I would be remiss if I didn’t

mention that I’ve been playing with the new Wilson Ultra racquet for the past 6 weeks or so, and I LOVE it!  “Our 2017 Ultra line is by far the most comprehensive and versatile collection we’ve created to date, said Hans-Martin Reh, General Manager of Wilson Racquet Sports. “We have high expectations for this racket as it delivers on what we have heard from a wide range of professional, avid and amateur players – ‘I want more power without losing feel’. Ultra reflects a unique blend of modern design and novel technologies that expand the hottest part of the racket’s sweetspot by 15 percent. This translates into a racket that gives more power and force where and when it is needed while enhancing feel.”

Now, I’m just a 4.5 player – certainly no Madison Keys or Gael Monfils (!) – but I can absolutely feel the difference in the amount of power and control I get with this new stick. And the new paint job is pretty slick, too: navy and bright blue accent colors, matte finishes, and velvety paint make the Ultra look and feel amazing!

In its release on the new racquet, Wilson tells us that the 2017 Ultra line has been designed to enhance the performance of a wide range of players. It consists of six models: the Ultra 100 Countervail® (CV), Ultra 100L, Ultra 100UL, Ultra 105S CV, Ultra 110 and Ultra Tour. Each model has been developed to reflect differences in athlete age, size, and ability, and varying head sizes, weights, technologies and string patterns allow players to select a model that is right for them based on their individual needs and style of play.

The Ultra 100L and Ultra 100UL are two maneuverable, lightweight options ideal for juniors and smaller adults. Each 2017 Ultra model is compatible with the brand’s X2 Ergo handle technology, which is a customizable handle shape for the top hand of two-handed backhands to create optimal feel for the modern two-hander. This provides players with more power, versatility and leverage.

And, even though Roger Federer isn’t using the new Ultra – he uses the Wilson Pro Staff – here’s a little behind-the-scenes look at how his racquets get strung during the US Open, courtesy of ESPN Sports – Enjoy!