Weekend with the Broncos 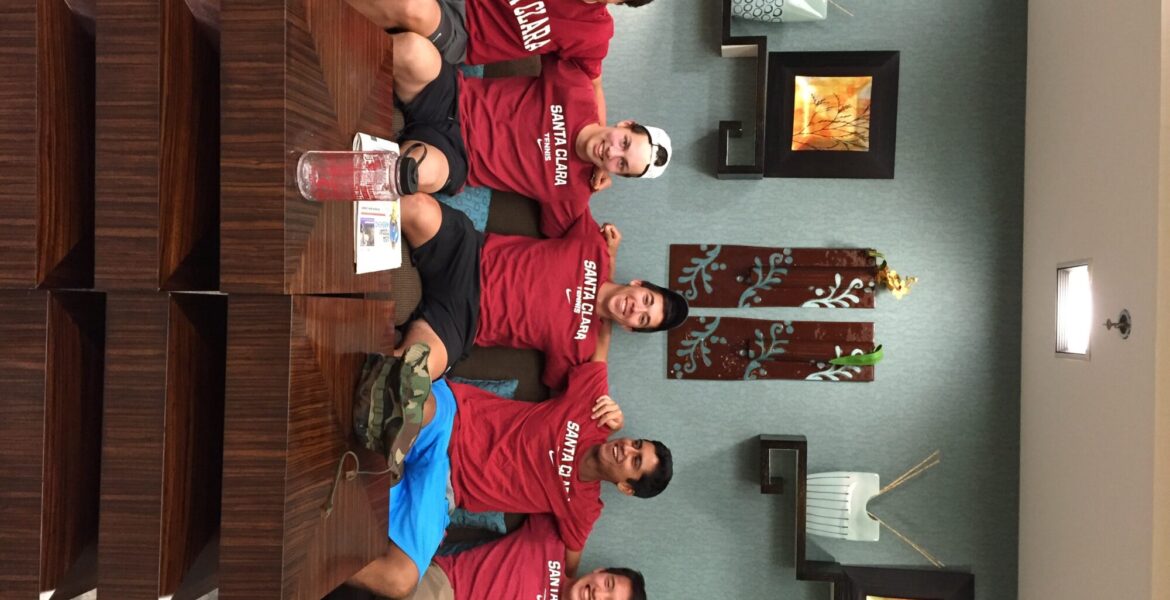 My son spent last weekend with 4 of his fellow Santa Clara recruits (the 6th guy lives in Hawaii and couldn’t get there for such a short visit) cheering on the Broncos at their final regular-season matches of the year. This was a trip they had been planning since the end of December. It was something my son had been looking forward to all semester. And the time had finally come to take him to the airport for the long flight across the country.

Getting to San Jose (the closest airport to the Santa Clara University campus) is a bit tricky from Atlanta. We have yet to find a non-stop flight though I’m told they do actually exist! For this trip, my son made a short stop in San Diego before continuing north. It wasn’t too bad, especially when he had such a great weekend in front of him. He took a quick cab ride from the airport to the hotel (another tricky matter – many of the area hotels require guests to be 21 or older in order to check into a room) where he met up with Robert and Kamran before grabbing dinner in the area.

The next day was Senior Day for the Broncos. They were playing conference rival Gonzaga at the beautiful Degheri Tennis Center, and the Broncos came out on fire! The 5 recruits were cheering on their future teammates from the sidelines as they won the doubles point pretty handily then sped out to a 3-1 lead by taking the singles on courts 1 and 2. Line 6 clinched the match for the Broncos giving all the guys plenty to celebrate that night!

The next day was another conference match, this time against 67-ranked Portland. Though the Broncos were the underdogs in this one, they fought hard and pulled out the victory with sophomore Mikheil Khmiadashvili getting the clinch 10-8 in the 3rd set tiebreak at Line 4.

My son had stayed with Mikheil during his Official Visit back in November and has since developed a really nice friendship with him. When the match came down to Mikheil’s court, my son and the other recruits led the cheering then joined their future teammates as they charged the court after match point. What a great experience for these young guys to get to be part of back-to-back victories!

As is typical for my teenager, I got very little information upon his return home last night, outside of the tennis results. I do know the boys had fun together and loved being at the matches. And I know the Holiday Inn is a good place to stay when I come visit over the next 4 years. Other than that, I don’t know much!

My son is still super excited to be heading to Santa Clara in the Fall and is still 100% sure he chose the right school and the right team. The recruits got along great with each other – and the rest of the team and coaches – over the weekend, so that’s a big relief on my end.

This is all becoming very real. Graduation is one month from tomorrow. Then a summer of training and tournaments. Then Freshman Orientation. Then college.