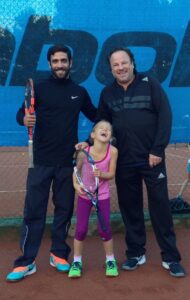 Today’s post comes from an email I received from Frank Giampaolo, author of The Tennis Parent’s Bible and creator of the Maximizing Tennis Potential website, and is reprinted here with his permission. It illustrates the incredible family commitment necessary to develop a young player who wants to be a top professional. I have been reading and hearing about Isa for several years now, so it’s interesting to read about the specifics involved in her training. Please understand: this is a child who has shown that she has the X Factor – I do not feel this type of lifestyle and training is necessary or even appropriate for the majority of junior players. Frank’s approach, on the other hand, can be valuable for any junior, regardless of his/her goals. Please go back and listen to some of my podcasts with various Tennis Parents (click here) for more insights.

This special report from Barcelona, Spain is a must read.  Jana & Jordan Waring agreed to share with you their daughter, Isa’s, actual monthly progress report. Monthly accountability and guidance is an essential part of their developmental plan.

Two years ago, I traveled to Barcelona and worked with this wonderful family in developing a deliberate customized training plan. Working as a team, the parents decided to become educated about the process of raising a champion. Within two short years, Isa bypassed the masses and reached the top ten nationally.

The below email is a monthly report sent by Jana (Isa’s mom) regarding Isa’s current tennis efficiencies and deficiencies.

Parents, it would be wise if you’re truly interested in maximizing your child’s potential at the quickest rate, to begin with a detailed, customized evaluation session. I am home in Southern California two weeks a month in 2017.

Ranking: 8th Nationally in U10

We have been with her new coach for nearly three months. I am still aiding in the training regime with feeding balls for two hours each day, hiring/firing/supervising hitting partners, physio, fitness coaches, organizing practice matches, tournaments, driving, stretching, massaging, shopping ….

Like you said, it is no laughing matter being a tennis parent.

After a brief two months of fixing a LOT of technical flaws, which you have seen some videos, we are seeing some progress. The following is Isa’s Monthly Progress Report.

We spend a lot of time playing practice points, sets and matches with various people and analyze and plan and analyze some more… Very helpful!

After the last two months of cleaning up and no tournaments, she started competing again. Rough start, some of the routines were difficult to reincorporate for both of us. The training of the patterns and practice matches (rehearsals) help, but she still tends to deviate a bit.

This gets me to the last, and the trickiest …

This goes hand in hand with nutrition, hydration, sleep, match preparation, and overall state of mind. I find that early morning matches are always more difficult for her, I believe the glycogen stores haven’t ben refilled and so the brain runs on fumes. She is not a morning person, so a match at 8am on an empty stomach equals flailing arms, choking, panicking, tapping a racquet and a far more difficult match than it should. I have recently started giving her some pure fructose to take on changeovers which does help IF she remembers to eat it.

She has been winning so much in the spring and summer that she only plays up now, which is trickier but she still keeps a good ratio. Oddly enough, it is it the weaker opponents that she has the hardest time with, it is almost as if she knew she should beat them easily and thus starting doing the “hotshot” tennis and then gets frustrated. In the evenly matched or outplayed matches she generally sticks to her patterns and performs much better. She is not such a head case as she used to be but she does panic and choke once in a while.

This is about it. Hope all is well and wishing you a lovely Sunday. Jana