The following article was written by Coach Craig Cignarelli for 10sballs.com and reposted here with their permission. 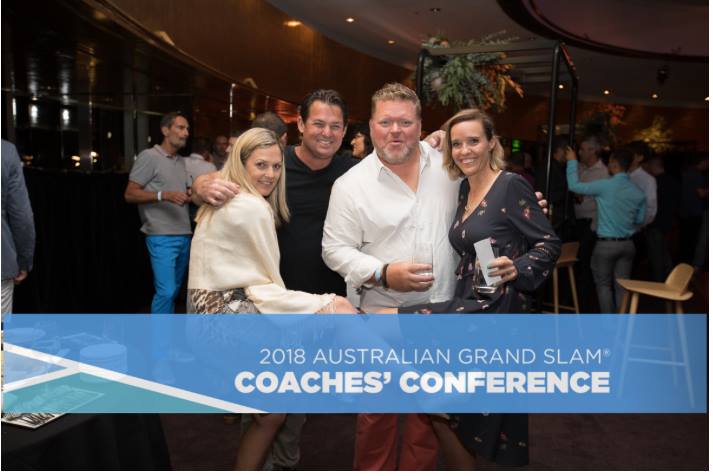 Earlier this week, three-hundred coaches descended upon Melbourne Park’s Hisense arena for a six-day educational forum entitled: The Grand Slam Coaches Conference. Representing nearly twenty countries, attendees witnessed presentations from some of the world’s best professors in our sport. For those who thought this was a tennis conference, that idea was quickly dismissed.

Tennis Australia’s CEO, Craig Tiley kicked off the event with a keynote suggesting major innovations are coming to courts near you. A Google VP followed and hinted at an approaching artificial intelligence. Several technicians spoke of video analysis, sports science gurus revealed data about genetics and recovery, and IBM’s statistician provided insight into repeating tactical patterns. One pair of researchers analyzed the hormonal components of nervousness, focus and psychological routines.

If all of this sounds daunting, it’s probably how the dinosaurs felt about asteroids. For several years, we’ve seen indications the revolution was coming – online instruction, apps for on-court analysis, video-cameras stuck atop fence posts – and today our sport is undergoing a massive technological advancement.

It used to be that statistics were like bikinis – what they reveal is suggestive but what they conceal is vital – but after Michael Lewis’ bestseller, Moneyball, statistical analysis changed. To wit:

I imagine a day will come when we can take every shot from a Nadal French Open final – with spin rates and angles and depths – and program them into a ball machine and a six-year-old will be able to play against the Spaniard in his prime. I imagine the opposite side of the court will light up to reveal where Federer or Djokovic decided to hit their shots in response to Rafa, and if the kid hits the lights, he will score points. At the end of the session, we’ll know precisely where the kid needs to improve, which shots he should change to beat Rafa, and how close he is to the Fed/Djoko standard.

I imagine a day when coaches are doctors and computer analysts, scanning the pre-match biorhythms to ensure the athlete is functioning properly and then allowing the 3-D scanner to ensure proper swing patterns and data analytics to determine the best percentages to ascertain a win.

I imagine we’ll have robot feeders and electrodes with synapses set to tell players where to hit. Ball kids will become Roombas and a drone with Hawkeye will replace the umpire. At some point, someone Russian lab technician will get the idea that he/she can build a synthetic organism to compete with the world’s best athletes ( think Deep Blue with muscular legs and Popeye’s forearms).

Fortunately, we are not there yet. We can still have coaching conferences where friends get together to share expertise, to have a drink, and to discuss the state of our art. We can BS each other about the “right” way to do things and we can stand on the shoulders of our predecessors and claim to have gained their insight to make players better. How long until the asteroid hits, we don’t know. For now though, the Grand Slam Coaches Conference offers wonderful insight into the present and a ghastly glimpse into the future. Thanks to Tennis Australia for allowing me to offer my own expertise and to listen to the world’s best coaches.