Americans & Collegians Hanging On Down Under, Day 8 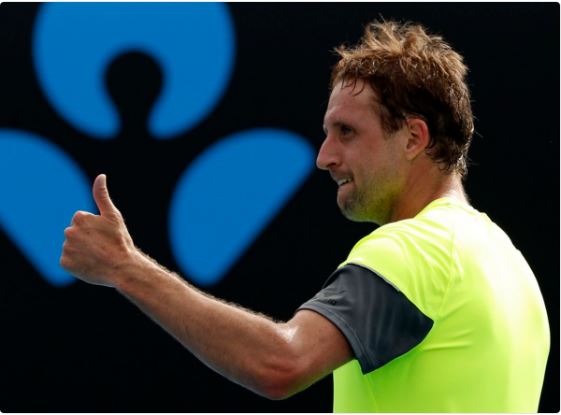 According to a write-up on Tennis.com: “Sandgren’s mom, Lia, is South African and she was his first coach growing up after she caught the tennis bug in her 30s. Sandgren was homeschooled to focus on tennis, but before you leap to any conclusions, he’s beyond adjusted socially, and no, he isn’t upset about missing prom.”

When asked about having a parent as a coach, Tennys told Tennis.com, “It works if they have your best interest. She’s not here. She’s a very realistic person so when I’m playing in a Slam she’s thinking: Well it’s only for a couple of days.” I can’t even imagine how she must be feeling right now, seeing her son on the other side of the world slaying dragons. Congratulations to Tennys, his parents, and his Tennessee coaches for this incredible success. And good luck against NextGener Hyeon Chung (who, surprisingly, beat Novak Djokovic in straight sets) tomorrow night! #SaveCollegeTennis

Here’s the rundown from Day 8:

Here’s what’s on the schedule for Tuesday (Monday night in the US):

American Juniors continue to do well in Melbourne. Follow Colette Lewis on Twitter at @zootennis for updates on match-ups and results. You can see the full draws here as well as on the Australian Open App. Matches continue to be aired live in the US on both the Tennis Channel and ESPN2 as well as streaming on the ESPN app. I’ve been watching full replays of both Main Draw and Junior matches as well on the ESPN app on my AppleTV.