Interviews from the US Open – Bob & Mike Bryan

Interviews at the US Open – Mary Carillo 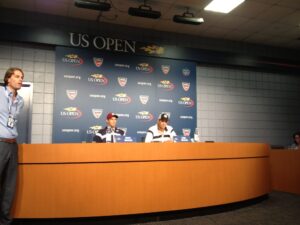 Bob & Mike Bryan were going after a very lofty accomplishment in the 2013 US Open: a calendar year Grand Slam in Men’s Doubles. They won the Australian Open Men’s Doubles, French Open Men’s Doubles, and Wimbledon Men’s Doubles this year. Unfortunately, the Bryan Brothers’ quest came to an end today after a great 3-set battle versus two worthy opponents. My awesome sidekick, Melanie Rubin, was in the interview room with them after the match. Listen to what they had to say below in a portion of the press conference. Melanie’s question appears at the 5-minute mark – a transcript of her question and Mike Bryan’s answer is posted under the interview link due to the low volume on the files.

Q. I’m around a lot of junior players, and after a tough loss, the first thing you hear is, Well, I hope they take away a lesson or learn something from that. In this part of your career, do you think that’s true for you guys?

MIKE BRYAN: Yeah, we always take something out of every match. You know, today we’ll take out a few things. We’ll do a few things differently next time.

You know, we really wanted it. We could taste it. Sometimes you want it too much. Maybe, you know, you’re always telling yourself to keep going for your shots, maybe played a little too safe.

We could have done a few strategic things differently and maybe we played I formation a little too much, which is not our bread and butter. Probably served Leander’s to backhand, you know, he started to get a rhythm on that.

But, you know, all in all it comes down to a few points here and there. We had a break point early in that second set. We win that point, and maybe we steamroll them, you know, 3 and 3.

You don’t want to look back too much in the past. We know what we have to do now to move forward to get better, but, you know, we’ll look back and have some perspective and reflect on the great things that we did do.