How Do You Define “Success”?

Been There, Done That 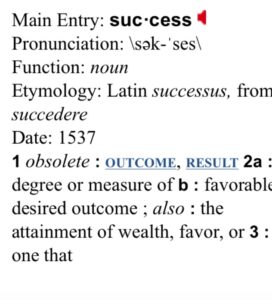 I recently posted a question on one of the Facebook groups I frequent regarding success. My question went something like this: Is success as a tennis player defined solely by how far one gets in the professional ranks? Or can it be defined in other ways? And, what about coaching success? Is it defined by how many of your players make it as pros, how many make it as D1 college players, or something else? If a young player reaches a high sectional ranking but decides to choose academics over tennis at the end of their junior “career”, are they – and you – a tennis failure in your minds?

It was very interesting to read the responses from various coaches, former junior champions, former collegiate players, and even former professionals. Some of these folks are now the parents of junior players as well, so they all come from a different perspective and, as expected, define “success” in different ways.

My son and I have had this conversation in various iterations a lot lately as he’s nearing the end of his junior tennis years and looking ahead to college. As a parent, tennis success to me means developing a love for the game and a proficiency for it that allows you to continue playing throughout your life. It also means forming relationships, learning how to network, problem-solving, and independence. By intermingling all of those those things, a junior tennis player can develop into a productive, healthy, happy adult member of society. My definition leans towards the process rather than the results. As I’ve said a million times, tennis is a metaphor for life.

So my job right now is really difficult. How do I get my child to move past the results-oriented definition of success to the process-oriented one? Is it “right” for me to even try? Is my son better served through his own definition if college tennis is his goal? Is my definition really even the better one at this stage of the game?

While I don’t want my son to be overly-stressed over results and rankings, I’m not so naive as to think these things aren’t important during his 11th grade year. The trick is figuring out how to help him find some balance, some reconciliation, between results and process, to help him recognize when he’s done so many things right during a match even if the outcome wasn’t in his favor. And then to take those “right” things and capitalize on them the next time he’s on the court. Or is this his coach’s job and not mine?

I think it’s crucial for us parents to have a clear definition of success in our minds as we help our kids navigate through the junior tennis world. We need to keep at the forefront of our actions regarding our child’s tennis that definition so we make choices – hire coaches, decide which tournaments to play and which to miss because they conflict with a family event, pull our child off the court for poor behavior – that position our child to attain that success.

Maybe the answer is that there’s not just one definition but several, and we (parents, players, and coaches) need to take them all into account at various stages of the journey to keep things in harmony. For the infinitesimal (a fraction of 1% of all players – your odds are better to get struck by lightening!) number of juniors who will go on to make a living as professional players, their definition of success will likely look very different from the rest of ours, and that’s okay. The important thing is to keep things fluid and flexible – NOT our standards or ethics but our definitions and expectations – so we can all claim success at the end of the road.