Things I Learned at the Open

The Gift of A Mentor 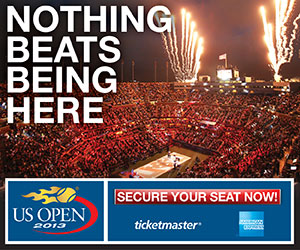 I know, I know. Y’all are sick to death of hearing about my week at the 2013 US Open. This will be my last article about it, PROMISE! So, please indulge me one more time as I share with you (and record for my own purposes) the things I learned at the Open.

First and foremost, I learned that Tennis Parents are Tennis Parents, whether our children are playing a tournament at the local public park for a plastic trophy or in Arthur Ashe Stadium at the Billie Jean King National Tennis Center for a $2.6 million paycheck. We all have a hard time not showing emotion while our child is battling on the tennis court. We all do our best to stay focused on the process and not the result, and we all know a win is much more fun for everyone involved than is a loss. It’s that way in the juniors; it’s that way in college; and it’s that way at the highest level of the professional game. We all strive to show our children that we love them no matter the outcome. We all strive to instill a love and passion in them for this sport they’ve chosen to pursue. We all strive to surround them with knowledgeable, smart, caring coaches who can help them reach their potential.

Secondly, I learned that it truly does take a deep-seated love of the game in order to reach the highest levels in our sport. Achievements in tennis, for most, come slowly and over a very long period of time. They take incredibly hard work and dedication. If the love isn’t there, the success is unlikely to be there regardless of the talent level of the individual player.

I learned that tv commentators aren’t as unbiased as they may seem. Spending time in the CBS booth on Ashe, I had the opportunity to chat with some of the announcers between matches. Turns out, just like us, they have their favorite players and secretly root for them to win. Who knew?

I learned that having media credentials at an event like the US Open opens doors. Big doors. Fun doors. Doors that allow you to walk next to your favorite athletes and their parents and their coaches. Doors that allow you to go up and start a conversation with these folks and makes them want to engage with you in that conversation. However, the bolts on those doors shut tight when you just want to take a photo with the guy who will likely win  – who won – the tournament. Just sayin’.

I learned that every top-level player grew up hitting against a backboard. They used that time to practice various shots and styles, pretending to be their favorite pros as they honed their skills. They created games to play with their peers, using the wall as an impartial 3rd player. They have fond memories of those hours spent hitting against their toughest opponent, the one that always got one more ball back.

I learned that it’s really nice to make friends early in the tournament so you have people to sit with during meals and hang out with during rain delays or bum a ride “home” from late at night. I learned that the folks who hang out in the media room are all pretty nice and willing to help out a fledgling newbie trying to learn the ropes.

I learned that riding the train out to Larchmont at 2am is really pretty safe, and that there are taxis waiting at the station even at that ungodly hour. I also learned that chivalry still exists in the world as evidenced by the young man who gave up his seat in said taxi so I wouldn’t have to wait alone at the station so late at night (early in the morning?).

I learned that a $20 food allowance can go a long way, even at the US Open. It takes some creativity and willingness to adjust your eating habits, but it can be done! I also learned that coffee is free in Media Dining. All day and all night. That helped a lot.

I learned that I want to see my son succeed in tennis, NOT because I care about rankings or where he goes to college or whether he turns pro so much as because I’ve met some incredible people through my own association to the sport, and I want him to get to spend time around those same folks. This sport is chock-full of junior coaches who know their stuff, of college coaches who embrace the challenge of taking 18 year old children and helping them grow into 22 or 23 year old incredible adults, of journalists who take a personal interest in the players they follow, of former top players who want to give back to the game that gave them so much. Who wouldn’t want their child to be in the company of these amazing human beings?

I learned that I really and truly love the game of tennis. I love being around the players and the coaches and the parents and the photographers and the writers and the commentators and the statisticians and the manufacturers and the stringers and the fans. I love being able to see behind the proverbial curtain into the inner-workings of this sport and learn what makes everything tick. I hope to have many more opportunities to see more, to learn more, and to share it with those of you patient enough to get all the way through my ramblings.

Before I close, I absolutely have to give a huge shout-out to Melanie Rubin, Meredith Corsillo, Colette Lewis, Sandra Hewitt, Marcia Frost, Pat Mitsch and, most of all, Sol Schwartz who suggested I apply for media credentials in the first place. All of these people taught me and supported me through my very first foray into sports reporting, and I owe them a huge debt of gratitude! And, to my husband, of course, who supports me every single day in everything I do.

Okay, that sounded a little like an Oscar acceptance speech – sorry!

I hope you enjoyed my reports from Flushing Meadows as much as I enjoyed preparing them for you. Now, as they say on tv, back to our regularly scheduled programming.