Giving Kids Their Five Years Back 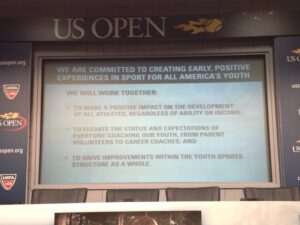 While in New York at the US Open, I was invited to cover the launch of USTA’s new initiative – in conjunction with Childhood Obesity Awareness Month – to get kids more physically active. USTA is partnering with the national governing bodies (NGBs) of several youth sports organizations to encourage parents, educators, city planners, and the medical community to create opportunities for children to move their bodies through dance, sport, and play. For the first time in history, children of the current generation are expected to live FIVE FEWER YEARS than their parents.

The panel for the launch included Bill Kohl (epidemiologist), Bob Harper (personal trainer and tv personality), Alexis Colvin (chief medical officer of USTA), and Sue Hunt (chief marketing officer of USTA). They each presented their thoughts on the initiative and how USTA is hoping to find success by introducing more kids to tennis at a young age. Of course, 10-and-Under Tennis is at the core, and I’ve been very vocal about my feelings about that, so I won’t discuss it any further in this piece.

While I support anyone’s efforts to get our kids moving more and eating more nutritiously, I question that this latest initiative is anything more than a creative (and quite expensive) public relations campaign. The public health community has been discussing physical inactivity among children for over 30 years. If anything, the data is getting more alarming and children are moving even less than they were three decades ago. I just don’t see how throwing mega bucks into another shiny PR campaign is going to change anything. We’ve educated the public to death – I think the public health industry has done a great job at making people realize how dangerous it is to stay sedentary and eat fast food all the time. Everyone gets it. But, like smoking cigarettes, just because people know it’s unhealthy and might even kill them doesn’t mean they’re willing to change their behavior. It takes action and local involvement by committed adults and children – not more PR campaigns – to create change. It takes public policy changes at the community level, new rules in schools, new programming, new incentives to get people to change their behavior.

At the conclusion of the panel’s presentations, Chris Widmaier (USTA’s managing director of corporate communications) opened up the floor to questions.

Me: Fifteen years ago I was the head of the Georgia Coalition for Physical Activity and Nutrition. Five years ago I started a middle school tennis program in Georgia. We were talking about these exact same issues [fifteen years ago]. We were talking about these exact same issues five years ago. We’re still talking about them in 2013. The USTA was incredibly supportive of my effort to start a middle school tennis league for one year. At the end of one year the funding disappeared and I was left on my own to figure out a way to keep things moving, even though I had over 500 middle schoolers in my little suburb participating. How is what you’re doing today going to be different? Will you continue to provide the support so that people like me who want to start grass-roots programs in their community, because people like me are going to make the change, you have to be supportive from a funding standpoint and PR standpoint, but if you don’t put your money where your mouth is, we’re still going to be talking about physical activity as a gateway behavior in 15 more years, and instead of taking five years off our kids’ lives, we’re going to be talking about seven and ten years off our kids’ lives.

Sue Hunt: The USTA, as I think many know, is not for profit. Every year we have a spectacular event [US Open] where we raise over $250 million. We give away $50 million each year for courts, schools, and programs. [Chris Widmaier corrected Sue’s number to $110-130 million earned from the US Open] . . . We would like to fund every single grassroots initiative. It was wonderful you are able to get it off the ground. I can assure you through the board meetings I’ve been to this week that that commitment is only going to grow, especially within the youth arena.

Chris Widmaier: We hope with that seed money over the first year they can stick and we can move on to other areas. We could not have done this grand project we have in mind, especially as it relates to youth, without committed volunteers and committed tennis enthusiasts around the country. It just couldn’t be done without it.

Bill Kohl: I’ve been doing this work for nearly 30 years. What’s different for me now is we’re all here now talking about physical inactivity, not something else. We have partnerships developing, these governing boards are coming together, the leadership, the PHA, others, focusing on physical inactivity. I think to counter those kind of things, I think focusing on not getting a diverse message but really focusing and promoting the physical activity part of things as a separate important health behavior will, while it may not totally counter, will increase its importance as a public health issue. I think it’s absolutely critical to separate it out and focus specifically on how to get children active and keep them active.

I wanted to ask a follow-up question, but we ran out of time. My question would’ve been something along the lines of, “What exactly is USTA’s mission? Is it to develop world champion tennis players? To get more people playing tennis at the recreational level? To entice kids to choose tennis over other more lucrative sports? To effect public health changes? To show the public that tennis can be fun and easy? To instill a strong work ethic in our juniors so they put in the hard yards to develop into professionals? Or is it all of the above?”

Yeah, I can see that the answer to my question might’ve taken a little longer than anticipated on my end. I guess it’s good I kept my mouth shut.