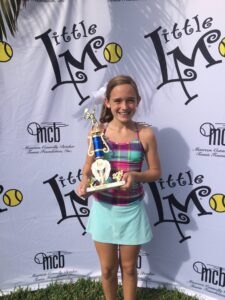 Today’s guest post is from Louisiana Tennis Parent, Ashley Hancock. Her daughter played in the Little Mo International tournament in Florida earlier this month. Ashley shares their experience below . . .

Our first Little Mo tournament was an incredible experience!  My daughter asked me a year ago if this tournament could be on our calendar.  She had a friend who played the International tournament in Florida last year, and had a blast.  So, early this fall I signed her up since entry was limited to the first 32 who sign up.  She is twelve years old so this would be her only chance left to play Little Mo.

I was extremely nervous when I saw the competitor list.  I think there were only five Americans and the rest were International.  Most had played Eddie Herr and also were going to be playing the Orange Bowl the following week.  This was going to be my daughter’s first taste of international competition.  I was just hoping she wouldn’t get completely rounded!!

My husband took her down for the first couple of days because I had a prior commitment with my youngest daughter.  He was completely amazed at how organized the check in and opening ceremony was.  Each player carried their country’s flag and marched around the tennis court just like they do in the Olympics.  Maureen Connelly’s daughter spoke to the players after the ceremony and stressed the importance of sportsmanship.  Draws were posted that night and we found out she was going to play the fourth seed from South Africa.

Prior to her first match, she exchanged a small gift with her first round opponent.  She gave her player a Mardi Gras mug and ornament.  She received a scarf with the colors of South Africa and a small stuffed animal resembling their country’s animal.  She played a great match but unfortunately lost 6-2, 6-0.

I flew in on Sunday after she had won two rounds of consolation beating girls from California and Peru.  She started doubles that afternoon with a girl she was paired with from NC.  We were so lucky to have such a great partner! They got along well and were evenly matched.  They gave the two seeds a battle but came up short 8-6.

In singles, she ended up losing in the finals of consolation to a girl from Austria.  I thoroughly enjoyed watching the international players and their style of play.   She came off the court happy because she knew she was going to get a nice, big trophy!!! Carol Weyman had a special trophy presentation for each player.

Her favorite part of the tournament was getting to play Mixed Doubles.  She played with a boy from Arkansas who we met for the first time when we got down there.  A friend of ours recommended that we play together.  They won their first two rounds and lost in the quarterfinals.

I was very impressed with how the tournament officials stressed the importance of sportsmanship.  The officials would walk around and hand out “Mo Money” to those exhibiting good sportsmanship on and off the court.  My daughter saved all her coins and then went shopping at the Little Mo table of goodies which consisted of t-shirts, towels, pens, books, candy, etc.

The Little Mo tournament was a memorable experience for us and I am so glad that my daughter played in it.  The PGA resort was phenomenal.  Our room was spacious and right across from the tennis courts.  The restaurants were convenient and had good food. They even offered a discount to the players and families. She did play at two other sites but they were only a 5 minute drive from PGA.

It was nice playing a high quality tennis tournament without the pressure of worrying about points, win/losses, and not knowing who your opponent is!! I would highly recommend this to those 12 and under!!