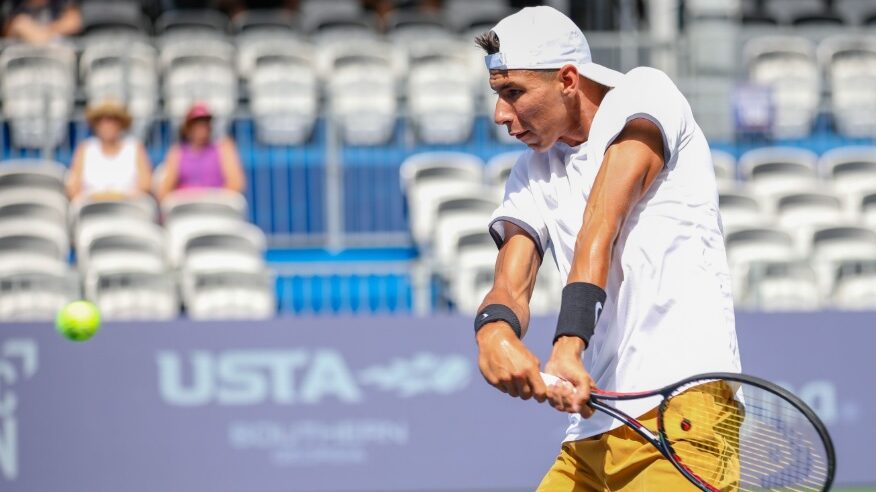 Monday was Day 1 of Main Draw action at the BB&T Atlanta Open at Atlantic Station. This is the 10th year of the tournament in Atlanta after moving here from Indianapolis in 2010. In the first few years, this ATP 250 event was held at private country clubs in the Atlanta suburbs. However, once it was purchased by GF Sports, LLC, in 2015, it moved to a bustling mixed-use development in the middle of the city, attracting new fans and new players to the event.

I was only able to see one match yesterday due to other ParentingAces commitments, but it was a fun one! Denis Kudla (USA) took on 19-year-old Aussie, Alexei Popyrin, a very tricky opponent. As you’ll read in the official release below, Popyrin was able to break early in both sets, moving on to Round 2 to be played on Wednesday.

I am posting photos on Instagram, so be sure to check those out when you have a chance. If you’re at the tournament, please let me know so we can connect!

Here is the official release from the tournament:

Singles and doubles first round matches were on the docket for Monday.

Want a player to keep an eye on throughout the 2019 US Open Series? Look no further than up and coming 19-year old Australian, Alexei Popyrin. Play began on Monday at the BB&T Atlanta Open presented by First Data as he faced American, Denis Kudla. The young Aussie broke early in both sets and secured a spot in the second round where he will face No. 4 seed Frenchman, Pierre-Hugues Herbert.

Popyrin only faced one breakpoint the entire match to Kudla’s seven. In the first set, Popyrin took an early lead breaking his opponent in the second game. He would eventually hold on to that break and take home the first set 6-3. Denis Kudla was only converting 44% of his first serves in the first set, and Popyrin took full advantage of that situation.

Popyrin did not slow down in the second set and eased through each of his serving games. The early break in the second game was enough for him to take home the match. Credit to his slice backhand, all match long as the American who couldn’t find an answer.

In the Monday Night Showdown featuring Andy Roddick and Robby Ginepri, an Atlanta native, Ginepri, edged the former world No. 1, 1-6 6-2, (10-7).

NOTE: Robby Ginepri is an owner of the Ginepri Performance Tennis Academy in the Atlanta suburbs. One of its players, Tyler Stice, made it to the semifinals of the Wildcard Playoffs for this tournament which I covered on the ParentingAces Facebook page last week.

The match came down to a match tiebreaker. The tiebreaker was just as entertaining as the previous two sets, with jokes continuing to come from the players. Though Ginepri served first, Roddick was able to pick up the first two points and gain a 2-0 lead over Ginepri. Ginepri would respond by winning five of the next six points, and brought the score to 3-5. Ginepri and Roddick would go back and forth for the remainder of the match, however Ginepri continued to hold his lead and won the breaker with a final score of 10-7. The final score of the match was 6-1, 2-6, 7-10. Both competitors enjoyed their time on the court, and remained humorous and up-beat throughout the 57-minute match.

For more information and to purchase tickets, visit bbtatlantaopen.com.