Americans & Collegians at the AO, Day 5

Americans & Collegians Down Under, Day 6 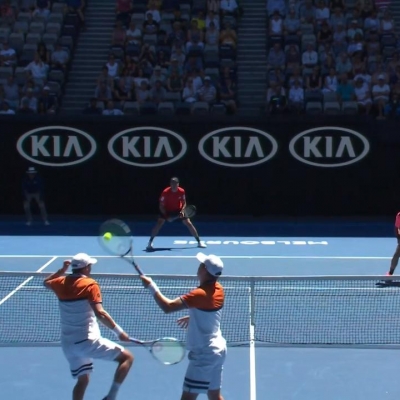 Early morning action at the Australian Open saw Ryan Harrison fall in straight sets to an in-form Marin Cilic. Ryan put up a great fight, but he just couldn’t seem to win enough of the big points to close out either the first set or the third set tiebreaker. This is the 7th time these two have met in ATP events with Cilic dominating their head-to-head record 6-1.

Some of you may know my connection to Ryan and his family, but for those who don’t . . . I grew up with Ryan’s dad, Pat, and Pat’s twin sister, Pattie, in Shreveport, Louisiana. I used to travel to our regional junior tournaments with them, which was kind of a bummer because I usually lost the first day and they usually won the events! We played on our high school team together, then I hung up my racquets while Pat and Pattie went on to have great college careers. After college, Pat settled in Shreveport with his wife and kids, and both Ryan and his younger brother, Christian, could be seen on the courts at Pierremont Oaks Tennis Club pretty much every weekend. There’s a great story about Ryan and my dad that you can hear in this interview I did with Pat a few years ago!

Things went a little better for the Americans and Collegians in the Doubles, thank goodness. See below for results and today’s matches.

Here’s the rundown from Day 5:

Here’s what’s on the schedule for Saturday (Friday night in the US):

Round 1 of the Junior events gets started today. Follow Colette Lewis on Twitter at @zootennis for updates on match-ups and results. As far as I can tell, the only other way to follow the Juniors is via the Australian Open website or app. You can see the full draws here as well as on the Australian Open App. Other matches continue to be aired live in the US on both the Tennis Channel and ESPN2. Enjoy!