A Week of Memories

Last week was one of remembering and reminiscing.

It all started when I decided to make the 90-minute drive down to Columbus to visit my former doubles partner who moved there almost 2 years ago. She’s been up to Atlanta to visit several times since her move, but I had yet to go see her in her new habitat. It was time to remedy that situation.

I arrived late Monday afternoon, just in time for us to do a little catching up on her back deck overlooking the lake before getting dinner on the table. We talked about our kids, our husbands, and our tennis. It was good to get up to speed on what we had missed in each other’s lives. When we both lived in the same neighborhood, we talked pretty much daily. Now, not so much. But that didn’t matter a bit. Our friendship is holding up just fine even with the geographic distance between us.

Tuesday morning we headed to the Cooper Creek Tennis Center so I could meet some of her new tennis buddies and play a little doubles. During one of the set breaks, we were standing courtside, and all of a sudden I got really choked up recounting the hours I had spent at Cooper 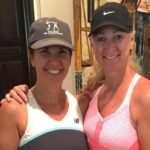 Creek during my son’s junior tennis years. As I looked around the facility, every match he had played there came back to me. I saw myself sitting on the metal bleachers watching him play across the bank of 6 courts. I saw myself sitting in my folding chair under a tree to stay out of the blistering sun while he played on a nearby court. I saw myself sitting under the awning waiting for his name to be called to play his next match. Cooper Creek, like so many other tennis facilities, holds a childhood full of memories and emotions.

And, then, Friday I attended the Celebration of Life of a fellow tennis parent, one taken way too early from this life.

Angela and I knew each other from tennis. We met when our boys were just starting their junior tennis journeys and bonded right away. Our boys played with and against each other several times over the years, so we had lots of opportunities to share our stories.

When I heard she had died, I was shocked. This was a woman who was so full of life force. She was small in stature but sure made up for it in heart. Angela was a fitness fiend – and that’s

coming from a person who exercises pretty much daily – and utterly devoted to not only to her children’s tennis development but also her own. She loved sports and could usually be seen donning some form of ‘Bama attire in support of her alma mater.

Angela’s son and my son couldn’t have been more different – from their physical appearance to their playing styles (think Roger vs. Rafa!) – but somehow they connected and became friends. I remember one tournament in particular down in Hilton Head. My son and I were staying at a hotel pretty far from the host facility, but Angela and her son had found a place walking distance to the courts. My son had gone through all of his clothing – have you ever been to Hilton Head in the middle of summer? – and we needed to find somewhere to do laundry. Angela invited us to come hang out at their place, have something to eat, and get my son some clean clothes to wear. The two boys hung out in the living room laughing over goodness-knows-what while Angela and I chatted over cold drinks in the kitchen.

We talked tennis, of course, but we also talked about our families and our lives away from the courts. Angela had been an accomplished CPA in her Life Before Kids. I guess that explains her penchant for list-making, whether it was related to packing for a tournament, preparing for an evening with friends, or guiding her son and daughter through their childhoods. Her love for her family, and theirs for her, could never be questioned, that’s for sure.

Over the last 2 years or so, Angela and I only stayed in touch through Facebook. Our sons had decided to take different paths, tennis-wise, so we no longer ran into each other at tournaments, but we did keep up as best we could. Our connection and memories through our sons and through junior tennis were more than enough to sustain our friendship. I would periodically get a Facebook Message from her or send one her way, but I had no idea she had gotten sick. And I had no idea her life was quickly coming to an end.

As I sat at Angela’s Celebration of Life service on Friday afternoon, I had time to reflect. I wasn’t sure if I’d see anyone at the service that I knew, but I was pleasantly surprised. The Tennis World, after all, is pretty small. I wound up sitting with two young men who had also gone through junior tennis with both our sons. We had a few minutes to catch up, and they shared how their freshman year at their respective colleges had gone. It was good to see them. They have grown up well.

At the end of the service, I found my husband waiting for me in the lobby of the church. He wasn’t able to be there for the service due to a work commitment, but he knew how Angela’s passing had affected me, knew the role she and her son had played in our son’s childhood, and wanted to be there to pay his condolences. We made our way through the long receiving line to Angela’s son and then to her husband. We expressed our sadness at their loss and recalled the joyful times we had spent together.

After talking to both Q and Dan, I know they are going to be okay. They are strong in their faith and have an incredible network of family and friends to lean on. Q, like his tennis buddies, has grown up well. I suspect his sister will too. Just to be sure, Angela left them plenty of her infamous lists to keep them on track.

NOTE: In keeping with Angela’s love of tennis, she and her family have asked friends and family to consider a gift to Sandy Springs Tennis Association where a scholarship has been established in Angela’s name so that underserved children can learn the game of tennis and other life skills (www.sandyspringstennis.org). Kids-Luv-Tennis was the cause where Angela intended to devote her time and resources.