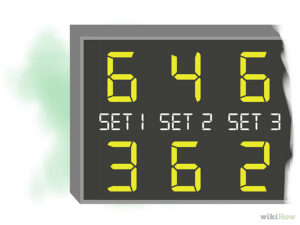 The following appears on the TennisLink page for an upcoming Georgia Super Champs (Level 3) tournament:

USTA Georgia has asked us to pilot / test a new scoring format at this GA Level 3 tournament. ALL matches in the 12s-18s, both main and back draw, will play three sets. But, they will be short 4-game sets, with the score starting at 2-games-all. This format allows the normal ebb and flow of a full 3-set match to be maintained, without the “sudden death” mindset of tiebreakers. At the same time, it does not change the maximum number of games (and time) required to play matches. OLD FORMAT = 2 regular sets (7-6, 6-7 max) then a 10-point tiebreak (1-0) in lieu of a 3rd set. That totals 13+13+1 games = 27 games. PILOT FORMAT = 3 short sets (5-4, 4-5, 5-4) which totals 9+9+9 games = 27 games). Since they start at 2-all, the reported scores will “look” like more games were played (7-6, 6-7, 7-6) but only 9 games per set maximum (not 13) will be actually played. Please be sure to give feedback after the tournament, by using the SURVEY form to communicate with USTA Georgia.

When I first heard about this pilot (from a Fellow Tennis Parent), I immediately reached out to the head of Junior Competition for USTA Georgia as well as the Executive Director. It seems the idea for the pilot came through the volunteer-staffed Junior Competition Committee, not through the paid employees at USTA.

Robert Sasseville, who happens to be one of my favorite tournament directors in our section and a well-respected tennis historian, is the one who initially proposed this change, so he and I had a lengthy phone conversation about his reasons for doing so. Robert shared with me the dilemma of running junior tournaments . . . having larger draws to provide opportunity to as many players as possible while simultaneously trying to minimize the number of school days missed and keeping kids from getting injured from playing too many matches in a shortened time frame. It’s a tough one to resolve.

“I would like to move away from the use of ‘Tiebreak in Lieu of a 3rd set’ and replace it with the ‘Best of 3 short sets’ (starting each set at 2-all),” says Sasseville. “For close matches the maximum number of games played for ‘tiebreak in lieu of a 3rd set’ or ‘3 short sets’ is exactly the same (27 games). One-sided matches would likely be somewhat shorter, since winning 6-2;6-2 would only require 8 games instead of 12. Playing 3 sets, none of which is a ‘super tiebreaker’, takes away the belief that anything can happen in a tiebreaker, since all 3 sets allow a player to lose 3 games and still feel like they have a chance to win the next game, and maybe get back into the match.”

Todd Kennedy, Vice Chair of USTA Georgia’s Junior Competition Committee, feels differently. “Call me a traditionalist but I like the idea of playing regular sets. They do it on tour, in college at ITF events, etc. I can’t think of one tennis event globally where short sets are played. I understand when bad weather forced tournament directors to make changes to scoring formats to ‘finish an event’, but don’t agree with doing it at the start of a tournament.” He continues, “Also one break of serve and a short set can be over. Playing to 6 allows a player to get back into a set. I like the 10 point tiebreaker for the third (if a third set can’t be played) because it teaches kids the importance of every point. I’m fine with maybe testing this for level 5 events but strongly disagree with anything else.”

Personally, I have very mixed feelings about the pilot scoring system and am happy my son won’t have to deal with it. On the one hand, I hate the 10-point tiebreaker and would be happy to see it disappear completely, at least from main-draw matches. This short-set format gives players the opportunity to play [almost] a full third set so that a player’s fitness level [almost] stays part of the overall equation. On the other hand, why do we have to keep tweaking the scoring system of our beautiful sport? And please don’t throw the “they do it in pro tennis” argument at me. That’s a totally different animal that is governed by ticket sales, sponsors, etc. Junior tennis should be about developing players and creating life-long tennis enthusiasts. I feel the exact same way about college tennis and all the experimenting that’s happening there. But, hey, maybe that’s just me? There is value in winning a set 6-0; that will no longer be possible with this pilot format (scores where one player wins all the games will likely be reported as 6-2, 6-2). And, what will this do to systems such as UTR that take score into account when rating players? Will they have to tweak their algorithms to account for this change? Or will it simply skew their rating system?

As stated on the upcoming tournament TennisLink page above, USTA Georgia is seeking input from parents and players via an online survey. I took a look at the survey, and there are no questions specific to the new scoring format, only space to write in comments. I’ve asked but haven’t yet gotten an answer yet as to how USTA Georgia will determine whether or not to roll out the scoring system statewide or recommend it to other sections or USTA National. If your child is playing in one of these pilot tournaments, I hope you’ll take the time to share your thoughts via the comments section of the survey or via direct email to USTA Georgia. Otherwise, you’ll have no leg to stand on if this pilot becomes the standard in junior tournament play.