Only 2 More Days at the BB&T Atlanta Open 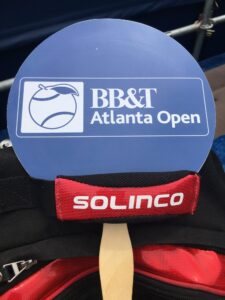 Friday was another great day of tennis at the BB&T Atlanta Open – Quarterfinal Day did not disappoint, even though we had a short rain delay in the first set of the first singles match of the day.

Tommy Paul came out swinging in his match versus tour veteran and Rafa-Slayer Gilles Muller, holding his own through the first few games. But, then the Weather Gods decided we all needed a little break to grab a bite to eat and do a little shopping around Atlantic Station, and when the match resumed, Tommy didn’t have quite the same firepower.

Muller went on a rampage, showing why he’s had so much success this summer. To Tommy’s credit, he kept a very positive attitude out there and battled through to the bitter end. USTA coaches Diego Moyano and Brian Boland remained

positive as well, encouraging Tommy to keep going for his shots. They both seemed pleased with their young charge’s performance against the veteran Muller, pow-wowing throughout the match about what to work on moving forward.

Next up was former Georgia Bulldog and 3-time Atlanta Champion John Isner who always has tons of support at this event. As he came on court, you could hear the fans Woof-ing at the Big Dawg, which John acknowledged with a big smile and waves to the crowd.

Even though there was only one break of serve by Isner in each set, he never seem too bothered by Lacko and went about his business in less time than it takes to drive from Atlanta to Athens. Isner did face a break point in the first set. “Yea dangit that was a horrible service performance today [laughing]. No I served well. He was for a good portion of the match on me a little bit. He returned well. He takes the return early, and he hit quite a few good returns quick and right at my feet. I stayed calm at that breakpoint; hit a great serve, hit three great serves. Got out of dodge there and then was able to play a great game at 5 all to win the first set.”

The third quarterfinal of the day was perhaps the most anticipated: 25-year-old Louisiana native Ryan Harrison versus 21-year-old Atlanta native (and rising Georgia Tech senior) Chris Eubanks. Chris has had a dream run this week, using his Wildcard to its full advantage while taking out fellow NextGen players Taylor Fritz and Jared Donaldson in the first two rounds. Ryan Harrison proved too tough for the Yellowjacket, cruising to an early 5-0 lead in the first set before Chris finally held serve to get on the scoreboard. Harrison held to close out the first set 6-1 then kept his foot on the gas throughout the second set to win it 6-2.

At the end of the match, the announcer handed Chris the mic so he could talk to the very supportive crowd. He was very gracious, thanking everyone for their support, acknowledging that this was a great experience for him and gave him a chance to see what he needs to work on as he finishes up at GA Tech and prepares for life on the pro tour.

Ryan was complimentary of Chris’s play. “Chris was pretty aggressive early, and he was making a few errors,” explained Harrison. “So I was trying to focus on keeping my first serve percentage up. I know he’s got big weapons, especially with that forehand. I thought if I made first serves it would be difficult for him to control the point with it. I was really emphasizing on trying to make those. Then just you know I usually do a good job of making a lot of balls back and kind of putting that extra ball back in the court.”

The last Quarterfinal match pitted top-seeded Jack Sock against UK standout Kyle Edmund. Edmund, the twenty-two-year-old British star and Davis Cup player, seemed ready for aggressive play from Sock. He remained steady with his serve and returned the firepower with fire of his own, to come out on top. After winning the first set 6-4, Edmund took advantage of a weakened Sock – who requested a medical timeout but never seemed to recover fully despite massive crowd support – and dominated the second set, which ended quickly at 6-1.