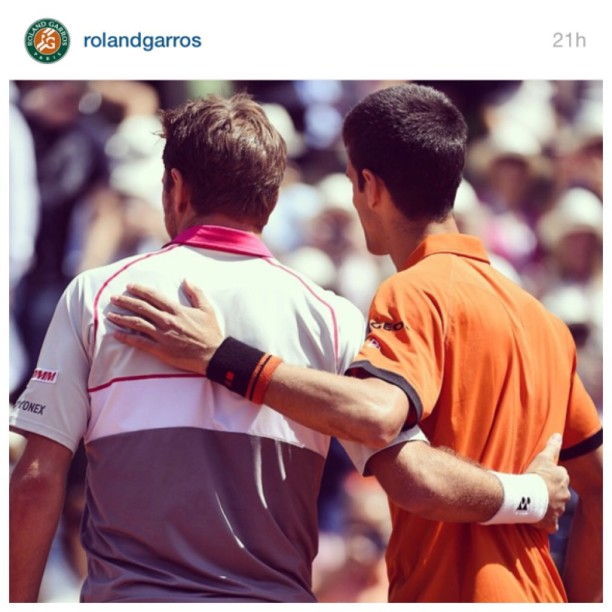 The French Open finals at Roland Garros between Stanislas Wawrinka and Novak Djokovic was a fantastic match. It had drama, amazing shotmaking, momentum swings with very high quality shots and rallies constantly from both players throughout the match.

As a former pro I “live” through these guys all the same emotions they feel, definitely not as strong but nevertheless we can “feel” those emotions to some degree.

I come away from this match convinced that tennis is at a level now never seen before. For me, an epic match or a “nail biter” does not have to be a score of 7-6 in the fifth set, those do happen from time to time but today I saw a number of things that made me go “WOW”!

It is a one on one sport and in tennis there can be only one winner in the tournament. Today, I saw two fantastic athletes battling it out with honor, respect and great sportsmanship. Both “won” today. Novak won in that he showed class in defeat and congratulated Stan with genuine warmth and respect which won him millions of new fans from around the world. Stan won the match in a fashion that demands respect and awe not only from his opponents but also from casual tennis fans. Stan elevated his game tremendously and I have rarely seen Djokovic beaten from the baseline as today. It was inspiring to see these two guys at the very best of their abilities battle for over 3 hours with such high quality tennis. I salute you guys! It was awesome…

Stan Wawrinka elevated his game to a level I have never seen him able to do. Some day he will watch it and realize his game at this major made a giant leap forward. He now knows he can beat the best in the world, when they are at their peak and actually beat them in every facet of the game! This is a whole new “bar raising” experience for Stan that can only help him in future epic matches.

Novak is a different kind of player from Stan in that Novak is an extremely solid runner / hitter/ outrageous defender and one can find very little if any weakness in his arsenal. Novak has a “complete” game as he can serve big too and his volleys are certainly not a negative. But he prefers to play an aggressive running style of outstanding defender tennis by outlasting and out defending most opponents. Stan on the other hand is a runner/ aggressive baseline hitter that attacks and comes forward as much as possible. Much more so than Novak in today’s match. Every shot Stan has is “big”! I do think today Stan was a tad better in the first serve department, a tad better at the net but a whole lot more impressive off the baseline than we have ever seen him. I have seen him play a lot and at times he looked very mercurial but today he came out firing and by the middle of the second set and all of the third set he absolutely dominated Novak in the baseline slugfest. It was shocking to see what Wawrinka can do with that one handed backhand. Around net posts while full split sliding and ripping it to the corner. No doubt in my book he has the best one handed backhand ever and now it could be the best backhand period! I think he is a legitimate contender for the #1 ranking if this type of tennis can be played!

This is a match I would gladly show to my academy kids. Here are some of the many lessons one can learn from this match.

The quality of the shots and the very high percentages in serving, the absolute focus by both at any crunch time points and the high number of winners by Stan in particular was over the top. Stan kept it up for over 3 hours!

Stan did not let his focus wander and neither did Novak. Even though Novak was clearly “outplayed” in the third set with ridiculous shots from Stan, Novak kept “hanging around” and went up 3-0 in the fourth after Stan went up 2 sets to 1. The quality of the shots, the rallies, the change of directions by both were of the highest standards.

3. STICK TO A WINNING GAME PLAN:

These guys know each other’s games. There are no surprises. But today Stan elevated his quality of his shots off the baseline fourfold from previous matches, he had incredible accuracy, power and variety , especially on his amazing backhand and that most likely surprised Novak. Novak is a brilliant player to “absorb” power due to his speed, agility and defending skills but Stan absolutely bludgeoned and blistered ground strokes from anywhere in the court! It was astounding to see what he did in that third set. Novak could do nothing but stare in disbelief….

But here is what I liked a lot. When Stan served for the match he missed a backhand down the line to go down 0-15. But Stan did not back off, he kept believing in “going” for his shots and even though it was a nerve racking game, was up 40-15 (two match points) and Novak fought back and actually had a breakpoint but at the end that wicked one hander down the line backhand won it for Stan on match point. Stan never gave up on his “game plan” even though he made some errors. Great lesson on how to close it out!

4. RECOGNIZING MOMENTUM AND USING IT EFFECTIVELY:

Stan went on a tear from the middle of the second set onwards all the way to the end of the third set. This is where Novak recognized an “opportunity”. Novak knew Stan cannot keep that high of a quality of tennis up forever. Novak focussed, kept “hanging around” and suddenly there was a little light at the end of the dark tunnel. Stan relaxed a little, got broken and suddenly Novak was up 3-0 in the fourth set. In previous big matches, this is where Novak turns on the “afterburners” as we saw with Murray in the semis and that is what Novak is known for and was looking for. He had finally begun to get a grip on the match. Unfortunately Stan upped his quality once more and ran the set out 6-4 with the quality of tennis and tactics that won him the second and third set. It was impressive to say the least.

Both guys were 100% “there” for this momentous match and gave their all. But once the match was over, Novak was very gracious at the net with a genuine heartfelt congratulations to Stan.
That was an awesome gesture and at the awards ceremony, the crowd made their feelings and appreciation known to Novak. He won many millions of fans more.

I am so proud of these two guys as they are true ambassadors for our sport. Wimbledon and the rest if the season including the U.S. OPEN is going to be an interesting journey! I cannot wait to see what will happen! So much talent out there!