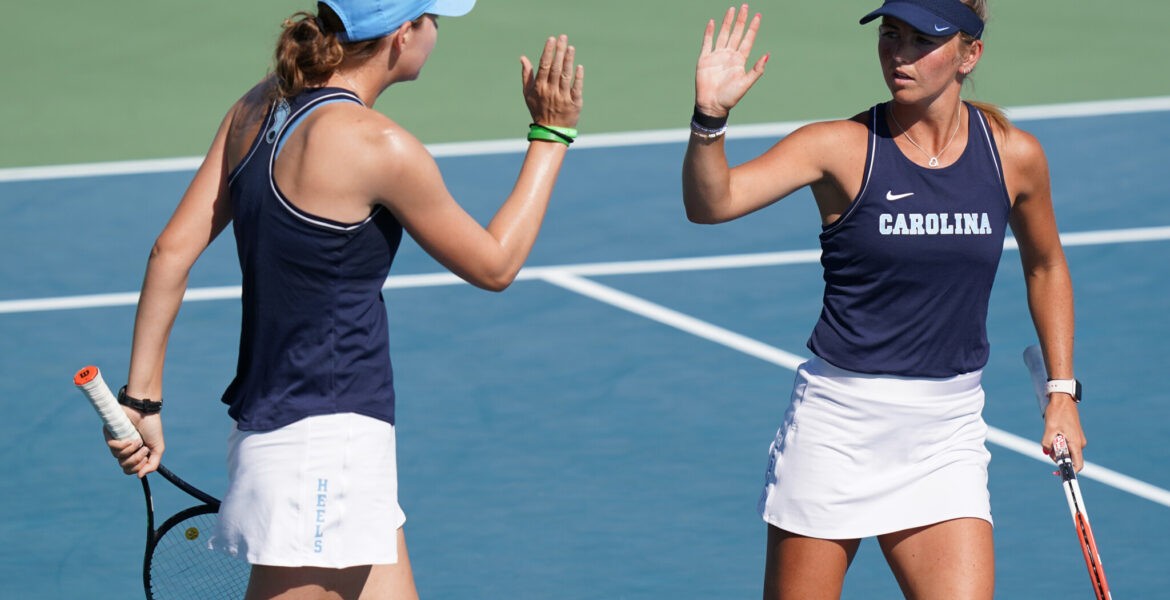 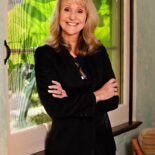 Today’s national championship matchups are set as the semifinals wrapped up Thursday at the NCAA DI Tennis Individual Championships.

In women’s singles, defending national champion and No. 2 seed Estela Perez-Somarriba (Miami FL) defeated Oregon’s Janice Tjen 7-6(4), 6-0 to advance to her second consecutive national championship match. The win also tied the record for all-time NCAA tournament wins at 17, which she will break with a victory tomorrow. She’ll face No. 3 seed Emma Navarro, as the Virginia freshman knocked off the tournament’s No. 1 seed, Sara Daavettila of North Carolina, 6-4, 2-6, 6-2 to set up an all-ACC final.

Emma Navarro made the tough decision to postpone a pro career and test her mettle at the college level. “I think that’s one of the best decisions I’ve ever made. I’ve had the most fun playing tennis this season at UVA and I couldn’t have asked for a better coaching staff or a better team to have by my side. I’m sure you guys watching heard them out there cheering for me. So I think it’s been really awesome. We have a great program in place on the court and off the court with fitness, and our team culture is awesome. That’s definitely been something that we’ve been working on. So, yeah, I’ve had a lot of fun and who knows what the future will hold.”

Fresh off winning the men’s team championship with Florida, No. 6 seed Sam Riffice knocked off No. 1 seed Liam Draxl of Kentucky, 7-6(5), 2-6, 6-1, to advance to the men’s singles final. He’ll now face the tournament No. 2 seed, South Carolina’s Daniel Rodrigues in an all-SEC final, as Rodrigues advanced after Baylor’s Adrian Boitan retired while Rodrigues led 7-6(1), 3-1.

Rodrigues was asked about fellow Gamecock and 2019 NCAA DI Men’s Singles Champ, Paul Jubb, and what he’s learned from him. “Him doing what he did definitely helped me to do what I’m doing right now because he showed me that was possible, and I just try to follow his steps. Even when I was practicing with him, trying to just follow whatever he was doing because he was definitely doing something right … We talked a lot before the tournament. I called him myself to ask, ‘How did you approach the beginning of the tournament and each round?’ And he definitely advised me very well. And we keep
talking every day, he keeps telling me to keep going and the job’s not done. After the tournament, we’re still going to talk about the future tournaments too.”

Navarro came up just short of also advancing to the women’s doubles final, as she and partner Rosie Johanson fell in a super-tiebreaker to Kylie Collins and Lulu Sun of Texas, 4-6, 7-5, [10-8]. They’ll face the fourth-seeded pair of Makenna Jones and Elizabeth Scotty of North Carolina, who defeated Anna Rogers and Alana Smith of NC State, 6-3, 6-4. 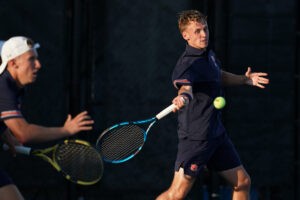 Here is the matchup for Friday’s Women’s championship singles match:

Here is the matchup for Friday’s Women’s championship doubles match:

Here is the matchup for Friday’s Men’s championship singles match:

Here is the matchup for Friday’s Men’s championship doubles match:

All quotes and photos courtesy of USTA/NCAA.